E62 The Exploits of Okuninushi 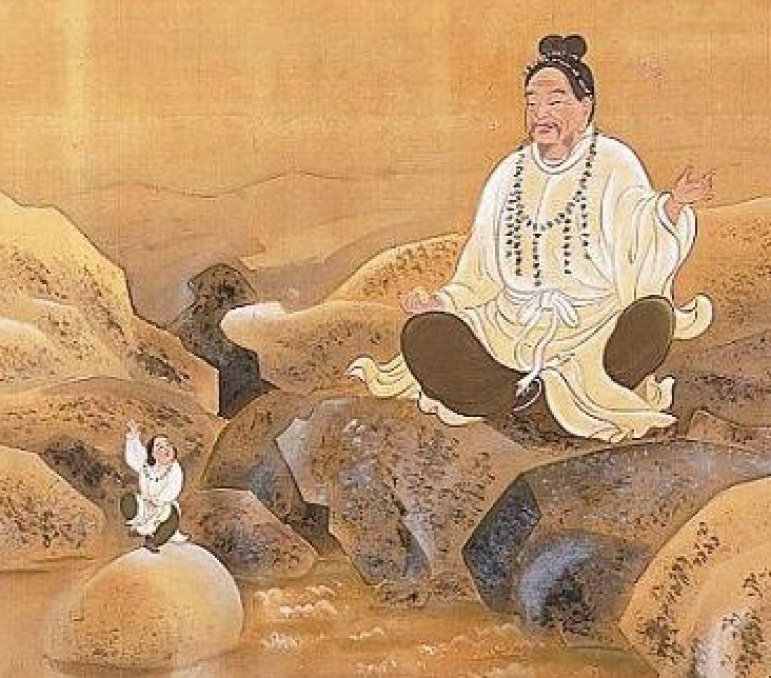 Show Notes for episode 62 of our Podcast – The Exploits of Okuninushi.

Now we haven’t been here since Episode 44, a long time ago now, but we will be continuing on with the story of Shinto.

And so we left it off last time with Susano-o having defeated the Dragon Yamata no Orochi, then taking Kushinadahime they had their son Ohonamochi before he left for the land of Yomi. (Though some alternative Nihongi writings say he was a descendant of Susano-o and not his son, and so too the Kojiki lists him as a descendant of this kami.)

So I guess in some regard he save the woman and then left her in the overworld alone? It does not really explain whether he took her with him or not.

But now that we have seen the end of Susano-o’s story in the formation of Japan we continue on with Ohonamochi. Now he also goes by many, many other names. One of them is Okuninuchi in some writings, particularly the Kojiki and so continuing on from out story we find that we find he had 80 brother who had given over their lands to him. Now there may be some alternative version of the Nihongi perhaps that talks of the birth of his brothers, however we won’t be dwelling too much on that thought.

Right now I am taking this part of the story from the Kojiki, until the story matches up with the Nihongi, as we have stated before some aspects are mentioned in one text and not the other. Or at other times, one event in one book can occur much later in the other.

Now there was a problem for all of them, all 80 of them wished to marry Yagimihime, from modern east Tottori Prefecture. One day, all were out together, and Okuninushi was mad to be the one to bear their satchel. He did not see what occurred, however, his brother came across a naked hare and so they told him if he wanted to get better he should bathe in brine and lay down exposing itself to the winds high on a mountain peak.

And so the hare did so, thinking if would make him better after his fur had been stripped from him. But sadly this did not occur, his skin blistered in the winds and he was wracked with pain.

Eventually Okuninushi came across him, asking him what was the matter, and how he had lost his fur.

And so the hare regaled his tale. He had been upon Okigashima and wished to cross the water to Keta-no-Saki, a point of land now in Tottori Prefecture, in the district called Inaba. So if you have ever heard of the Inaba Hare, well you’re about to learn its tale.

In his tale he said he tricked a sea beast. He said he wanted to see who had more siblings, he or the sea beast. And so he instructed him to gather all his siblings and form a line so he could count them as he jumped across their backs. Now before he reached the last one the hare made the mistake of crying out that he had tricked them and so the final beast grabbed hold of him stripping him of his fur. And that was when Okuninushi’s brother came along and gave him a false remedy. And it was why now he was wracked with pain.

Okuninushi then helped the hare, giving him a way to end his pain and so in the end, the grateful hare said that Okunushi would be the one to marry Yagimihime in the end and in the end that is what occurred.

The other brothers grew furious, they wanted to see their brother dead for marrying the one they all wanted. They went with their brother to Tema-yama in Tottori saying that there was a red boar here they would send down the mountain and that he needed to catch it or he would die. Now of course, this was a trick, and so his brothers finding a boar shaped boulder, heated it in fire and rolled it down the mountain to him. And so Okuninushi was killed.

His mother, was distraught. And so went up to heaven (I guess this answers the question about whether she went to Yomi or not). She beseeched Kami-mu-musuhi for help and so they sent down the kami Kisa-gai-hime and Umu-gai-hime to restore her son to her. They scraped him from the boulder and smearing his mother milk over him brought him back to life.

They tricked him again, forcing him into a tree they had split open, and then used to crush him. His mother again distraught found him and returned him to life. His mother beseeched him to flee, lest his brother kill him again and so he left for Ki where Oyabiko resided.

Oyabiko gave advice saying he should visit Susano-o in the Land of Roots, and seek council from him.

Now this is what the Kojiki says, the Land of Roots being separate from Yomi, known in Japanese as the Ne-no-kuni. I really don’t fully understand the separation between Yomi and Ne-no-kuni myself, and some people have stated they are not too separate from one another. However, there is no clear consensus.

But anyway, Okuninushi goes to the Land of Roots and there comes across Suseribime, upon seeing one another they pledged themselves to one another before Suseribime returned into her home to tell her father Suano-o a handsome kami had arrived. Immediately Susano-o threw him into a chamber of snakes.

Suseribime helped her new husband, gifting him a scarf and instructing him to wave it 3 times in front of the snakes when they try to bite him. And so he emerged unscathed. Next he was thrown into a pit of wasps and snakes, again using the scarf he was saved and survived.

And so the third challenge came. Susano-o shot an arrow into a moor and asked him to retrieve it, but upon entering he lit the whole place on fire, but he came out unscathed after a mouse came to him and told him he could hide in a void below the ground.

He returned the arrow to his father-in-law and was finally invited into there home. Eventually Susano-o slept, and so they tied his hair to the rafters and pulled a stone across the door. Okuninushi and Suseribime fleeing back to the land above with his father-in-law’s sword, bow and arrows. Susano-o awoke and eventually pursued after freeing himself from his home, chasing them to the gentle slope which joined the land above to Yomi (here again we see Ne-no-kuni and Yomi being used interchangeably).

Upon the slopes, he told Okuninushi to used the sword and bow to smite his brothers. And he did, he chased his brother and he smote them, sweeping them away in river rapids. And so Okuninushi could finally work on creating his domain.

Now Okuninushi’s first wife went with them, but in the end she feared Suseribime, and so she left, abandoning their child Ki-no-mata wedged in a tree fork.

Okuninushi went on to make Nuna-kawa-hime fall in love with him, and it worked, but soon after Suseribime was consumed with jealousy. Okuninushi then quickly became bother by her jealous behavious and decided to move away from the area of Izumo to Yamato instead. And so taking his new wife him, he left and they then lived in peace.

But he didn’t stop there, he would later take another four wives for himself, all of these giving many many sons, daughters and generational descendants. These new wives were known as Ta-kiri-bime, Kamu-ya-tata-hime, To-tori, and Iko-chi-ni.

One day, after all of these marriages, a kami came across the oceans whilst he was back in Izumo. He was robed in the skin of a goose, and his boat was made of a seedpod. The new kami did not respond when asked who they were, but after some investigation it was discovered they were a child of Kami-musu-hi by the name of Sukunabiko. And upon the discovery Okuninushi was instructed to make this of this kami as if he was his brother and together they formed the land into its final form.

And after this, Sukunabiko, depart to the Everworld (the place where the cockerels came from to coax Amaterasu from the Rock Cave) and so ultimately did not help in the final forming of the lands.

Okuninushi lamented the loss of his new brother, but a kami responded to his laments and cry for help. The kami Ōmononushi came forward saying he would help finalise the land with him, if he would worship him. And so Okuninushi did so. Now I must say, everything I had told thus far today comes form the Kojiki.

Okuninushi in the Nihongi is mentioned, but the events do differ, and they are in what consists of the ‘another tales states that’ section of the Nihongi. So lets have a look into them now.

The Nihongi states the he alongside Sukunabiko (the new adopted brother from before) and together they worked together to finish more parts of the world, but ultimately it was let unfinished before Sukunabiko left for the Everworld. And additionally, they found many ways to heal diseases. And they also devised ways to stop the calamities brought about by wild animals.

As Okuninushi then wandered Japan, upon finding areas that the two of them had not finished forming, he took it upon himself to finish the job until all places were finished by his hand alone, and then after that he deemed himself ruler of this land. Omononushi then came forth from the ocean to say he could only have completed his task because he had allowed him to, and so Okuninushi built for him a shrine.

Today was a lovely little Senryu from Heather, readying us for the Turtle Folklore Episode next week.

The tortoise, parting from the crane, is lonely for nine thousand years.