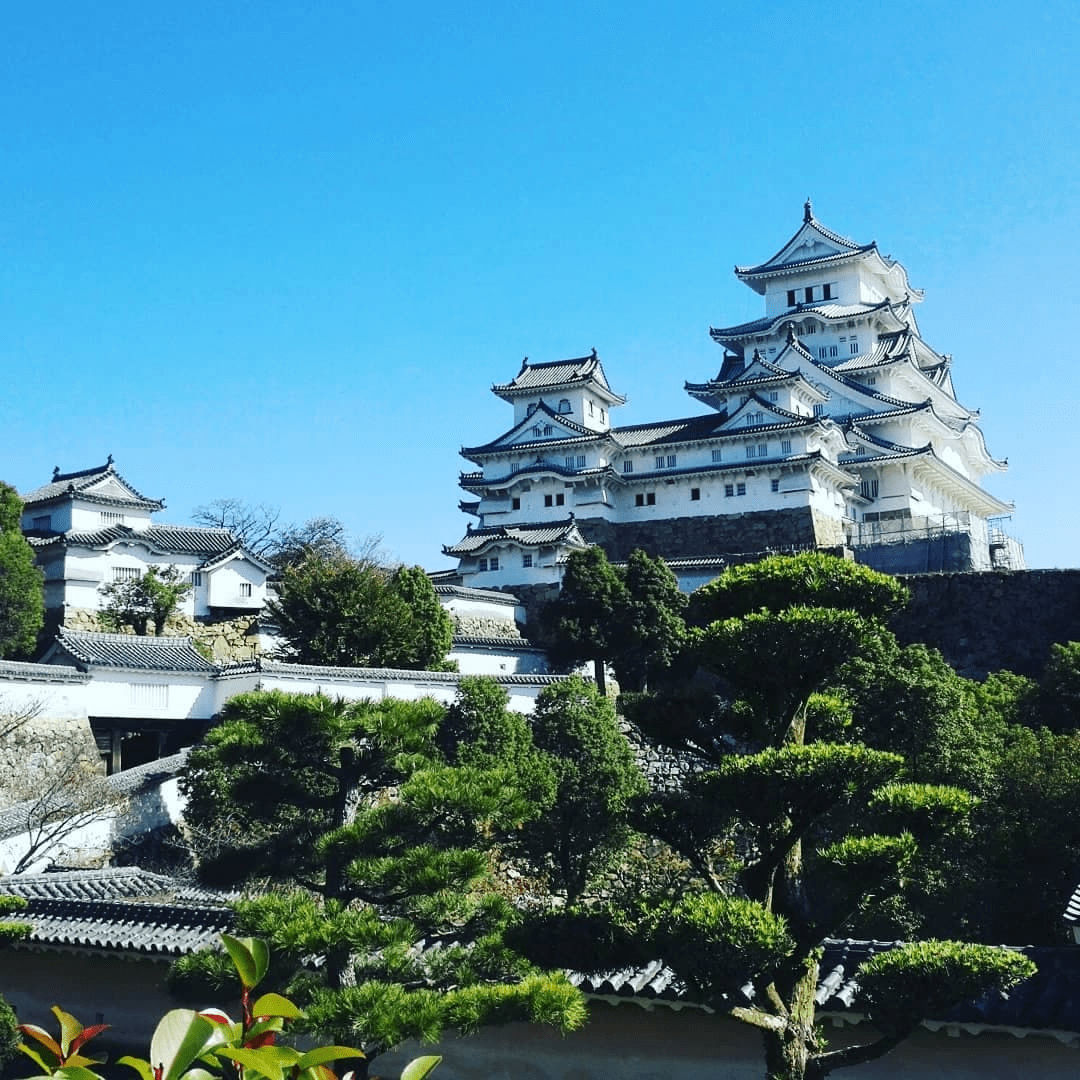 Show Notes for episode 27 of our Podcast – Legends of Himeji.

So today I wanted talk a little about some of the history of Himeji Castle. Castle in Japanese being pronounced Jō. As some of you many recall I visited Nagasaki during November last year when my parents came to visit. But we also visit the area of Himeji on the way down, stopping there for one night to explore the castle the next morning. It had been a place I had wanted to go for some time, not only as it is reported as one of Japans most beautiful castles, but because of some of the history which has surrounded it. And so I wanted to tell you some of that today.

Now the castle itself, located in Hyogo Prefecture,  also goes by the names of the Haruro-jō and the Shirasagi-jō (The White Egret Castle or White Heron Castle) this being due to its rooves of pure white with its exterior at times having being compared to a bird about to take flight. And you can easily believe that when you see the castle, with its sweeping rooves which rise up at its edges.

The building finds its origins as a fort dating to 1333, when a man known as Akamatsu Norimura constructed one there on top of the hill by the name of Himeyama. The fort itself only last for 13 years before it was changed into Himeyama Castle. Now that castle lasted for around two centuries before coming to be known as Himeji as we know it today.

In 1581 we see it significantly remodelled by Toyotomi Hideyoshi who added a three storied castle keep to the structure. This man is of notes as the ‘second great unifier of Japan’ as he was the successor of Oda Nobunaga who we have mentioned before in Episode 7, Nobunaga being the man who was the first to reunite Japan.

There were several other changes over time, in 1600 it was given into the ownership of Ikeda Terumasa after the aide he gave in the Battle of Sekigahara. (A battle which we will talk about in a future episode don’t worry) and Ikeda had the castle completely rebuilt between 1601 and 1609 which made the entire complex much greater in size, and finally from 1617-18 several extra buildings were added by a man known as Honda Tadamasa.

And that’s how the castle remained mostly, unchanged and safe from destruction. It remained intact even during the events of World War Two and bombings which happened within Japan. And it even remained unscathed during the Great Hanshin Earthquake. This particular earthquake was the 2nd worst one to affect Japan in the 20th century after the Great Kanto earthquake which devastated Tokyo and the surrounding areas, including the prefecture I currently live in.

Now of course there is much more about the castle itself, however, this episode I wanted to go more into some of the legends and perhaps myths surrounding this castle. Perhaps in the future, if people want to learn more about the factual history of the castle itself we will do so. So if that is the case, just let us know on our social medias or by messaging us on our website.

But, anyway, back to the lore’s and legends surrounding Himeji that I has read about from the books and journals I have. And there are two I wanted to tell. They are kind of short, but that kind of how our show works. Little bite sized pieces. We do have plans though, don’t worry in the future to delve into the larger topics of Japanese history and no doubt this will mean those episodes may reach maybe 40-45 minutes at a time, But as we work towards that, and prepare our research, we will keep bringing you these bite sized pieces.

The first goes by the name of Ubagaishi and we can translate that as something like Old Widow’s Stone.

Mukashi Mukashi, long long ago, when the great castle of Himeji was being built they ran into a sizable problem. Toyotomi Hideyoshi found himself being informed that they had somehow run out of stone. And there was no more to be found to continue and finish the original three storied keep of the castle. Now word spread into the general populace of the problems they were facing and eventually this story was overheard by a little old woman. Now, she may have not had much, but she knew she wanted to help, and so approaching the castle she offered them her millstone so that they may use it to help complete the castle. Now, the people were motivated by her generosity and so it is said that all the people of the area began to donate stones of their own so that the castle could finally be completed. (I will check to see if I have a decent picture of this, when I went to the castle I was sadly disappointed by the fact that the millstone if kinda covered up in an ugly looking mesh fence. I thought they would have presented it a little better, but alas, they have not).

The second short tale I have today, again relates to the construction of the castle itself. It is said that there was once a master carpenter by the name of Sakurai Genbei, now he worked for Ikeda Teramasa (the man who we mentioned completely redesigned Himeji Castle). Now Genbei, was the man who oversaw this construction and after all the years of sweat and tears, the day came when he could lay down his chisel and relax. And look upon the work he had created. But ultimately what he saw dissatisfied him completely, for he saw that the keep leaned a little to the southeast, he great work of construction wasn’t straight. It ate away at him day after day until it became to much. And it is said Genbei climbed to the top of the keep, chisel in his mouth and jumped from the top to his death.

Now the final two things I want to talk about today we can find referenced in a book known as the Fūryū Shidōken-den. This book dating to 1763 was written by Hiraka Gennai. First of all, the book talks of a strange item known as the ‘Red Towel’ or Aka-Tengui in Japanese. Now sadly, the book doesn’t really go into much depth as to what this strange thing is. It is a creature? Could it even merely be a towel which is red? Either at the time of writing this book, it is thought that the ‘Red Towel’ was a very well known thing associated with the castle and so the author felt no need to elaborate further on what ever this thing may have been. And sadly over time, what ever the Red Towel may have been has been lost. The other things which is mentioned is the fact that a Yokai, or monster dwells within the castle. The creature known as the Osakabe.

The story goes that around the time when the entire complex was being rebuilt and expanded at the beginning of the 1600’s a shrine had to be moved to make room for the expanding castle perimeters. Now the god, or creature which has dwelt in this shrine grew angry, and so a few years later the lord of the castle is said to have fallen in. People believing it to be because of this creature had a new shrine built inside of the castle itself to appeased it spirit. This shrine was named Osakabe and so the creature was thus given the same name.

Now you might be wondering, wait is that it!? But guess what, there is one more story about the castle of Himeji, and for those of you who have visited you might well know what it is. The story of Okiku, from last weeks episode. The Province of Harima, and the castle that the lord of this area lived in, was this castle. And the well of Okiku, well you can find it while walking the castle grounds.

So there you have it. Some tales of Himeji Castle.

Today for you Heather found another tongue twister, which we now know in Japanese is known as a Hayakuchi kotoba (Fast Mouth Words)