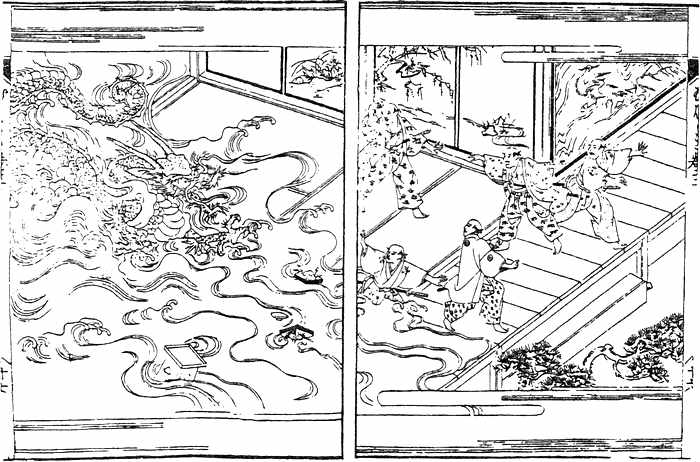 Show Notes for bonus episode 10 of our Podcast – Ninja Magician.

Kashin Koji (果心居士) was said to have been a magician born in 1524 who also went by the name of Shippo Gyoja (Pilgrim of the Seven Treasures). His ancestry is unfortunately not known and we can often find this man as portrayed wearing robes with white hair.

During his childhood he grew up on Mount Koya where he studied Shingon esoteric Buddhism, however, he soon found himself exiled after his interest in magic began.

After that he is said to have become a wander and would perform magic shows for people after deciding to live in the area near Lake Sarusawa.

Such tricks involved throwing leaves into lakes which would transform into fish, as well as being able to make people believe they were holding go stones in their hands when they weren’t.

His powers grew and he eventuallly found himself performing and scamming those of very high rank.

It is said Kashin had in his possession a hell scroll, which would move, as it was so skillfully carved. Oda Nobunaga wished to have this scroll, and after negotiations (and making an attempt on Kashin’s life) he finally bought the scroll for 100 ryo. However when Kashin gave over the scroll, the magic had been lost and it no longer moved. Kashin said this was because it was a priceless item, and no longer moved as it was now only worth what had been paid for it.

Nobunaga was disappointed, but he let him go.

By 1582 we find he was arrested for vagrancy, but was allowed out to entertain a dinner party for Akechi Mitsuhide.

Here Kashin managed to escape, using his magic on a folding screen showing a lake with a boat. He caused the water to flood into the party, and taking the boat he escaped. After this, the room he caused to magicially flood was completely dry.

He later comes into contact with Toyotomi Hideyoshi and he reads him his fortune. Unfortunately, due to it being an embarassing one, he is forced to flee by turning into a mouse as Toyotomi tries to kill him with his own hands.

We are unsure about the end of his life. Some say he was assassinated in 1584, but a book called Koro Chawa says he met with Tokugawa Ieyasu in 1612 where Ieyasu asked the man his age and he said he was 88.