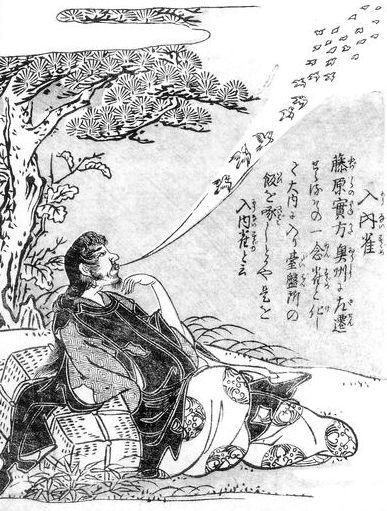 Show Notes for EP13 of our Podcast – Palace Sparrows.

I wanted to talk today about Fujiwara no Sanekata, a member of the Fujiwara Clan he was an accomplished poet in his time. And we can find 68 of his poems in imperial waka anthologies. During his life he is cited to have been the lover of Sei Shonagon, another established poet and author. This woman is best known for her book the makura no soshi. Better known in English as the Pillow Book.

Now the story goes that in 995AD, so in the Heian Period, that Sanekata was appointed as the Governor of the Province of Mutsu which falls into the modern day Prefecture of Iwate as well as several other northern Prefectures.

However that is only one version of the tale. There is another, found in the Kojidan, also known as Reminiscing of Old Times, which gives a slightly different story. It says he was exiled their not appointed, after Sanekata was seen to have an argument at court with the famed calligrapher Fujiwara no Yukinari.  He was the son of Fujiwara no Yoshitaka, the poet from Episode 3. It was this argument that caused the Emperor of the time, Emperor Ichijo to have him banished to Mutsu.

The emperor is even reported to have told Sanekata, ‘go and visit some poetic locations!’ before sending him away from court. And it was there that Sanekata eventually died, in 998.

However, there is a little bit more to this tale, as he didn’t just go quietly into the night.

His desire, and anger to return home causes him to manifest into a flock of sparrows, now known as the Nyunai-Suzume, literally ‘Palace Sparrows’ as it is reported they would appear and ravage the kitchen stores of the imperial palace. This was his revenge for the Emperor banishing him to Mutsu Province.

Today’s poem is also by Fujiwara no Sanekata.

One of the poems by Sanekata. We’re reading from the Ogura Hyakkunin Isshu, or One Hundred Poems, One Poet each. His poems was featured as the 51st in this 100 Poem sequence

Because my feelings
are too great to put into words,
my heart blazes like the moxa of Mount Ibuki,
with a love you cannot know.