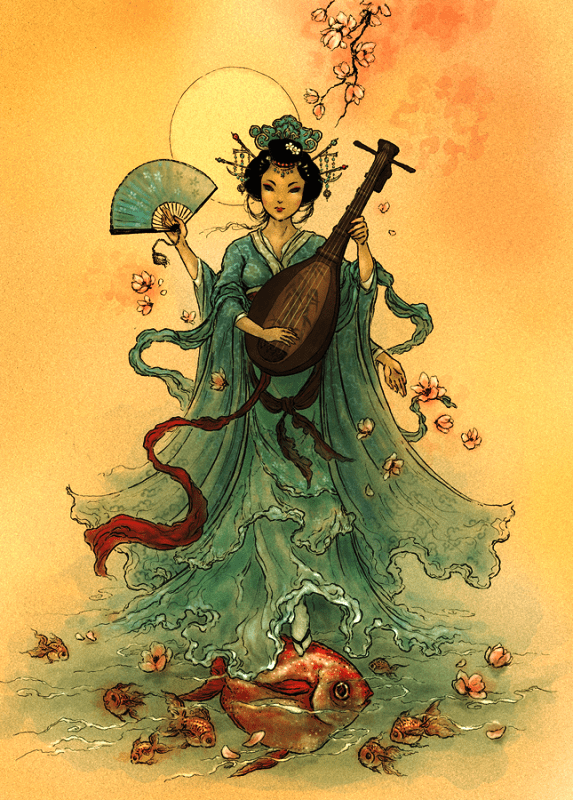 Show Notes for EP12 of our Podcast – When Day became Night.

Izanagi having left Yomi and needing to cleanse himself bathed in the Tachibana River. From this many new Gods sprang forth, however, the Gods we will talk about today are Amaterasu and Tsukiyomi. The Sun Goddess and the Moon God.

There are different origins for their creations, some say they sprang from mirrors which Izanagi held in his hands after cleansing himself. Others say it was from him washing his eyes.

Now these two Gods ascended to Heaven and after a time Amaterasu heard of a Spirit known as Ukemochi. And so she sends down her brother Tsukiyomi to wait upon her.

Upon his arrival, Ukemochi makes a feast for him in thanks, creating the food for the feast from her mouth. Looking at the sea, from her mouth came animals with fins, looking at the mountains animals of fur appeared; turning to the land caused boil rice to appear.

Tsukiyomi, disgusted by this act kills her and return to his sister to give her the news.

Amaterasu is appalled by his behavior and not wanting to see him again sends him away. And so Day and Night are separated.

Amaterasu then sends down the Spirit Amekumabito to see the body of the deceased Ukemochi and finds several things have sprouted from her body and so she brings them back to Heaven.

She brings the ox, horse, millet, silkworm, rice, wheat, large and small beans, and the feeling of panic. Amaterasu rejoices, saying these are the items which will allow man to flourish. She then reels silk from the silkworm with her mouth, thus inventing the art of silk rearing.

Fujiwara no Ietaka lived between 1158 and 1237. He was a waka poet who aided in compiling the Shin-kokinshū and was the son-in-law of the Priest Jakuren. 280 of his poems can be found in various waka anthologies.

A twilight breeze rustles
through the oak leaves
of the little Oak Brook
but the cleansing rites
tell us it is still summer.