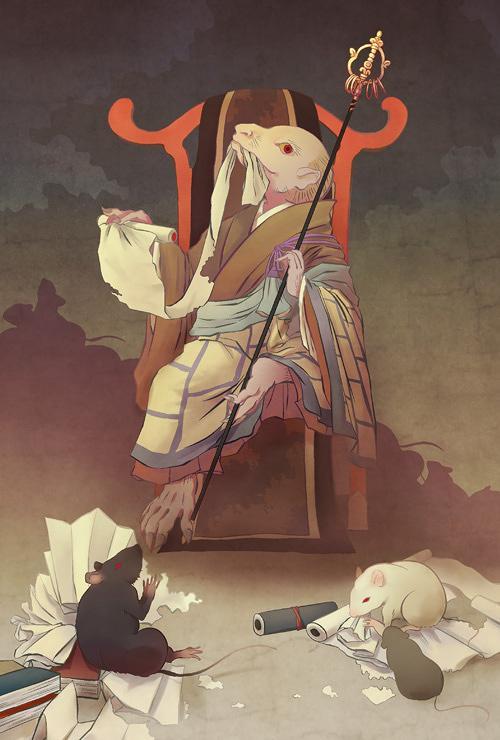 Raigo was a Buddhist monk living at the Temple of Mii-dera in Kyoto. He was approached by the Emperor Shirakawa with a proposition. If he was to pray for the safe birth of his son, he would expand his temple.

Raigo agreed and eventually his son was safely born. However, the Emperor reneged on his pledge and so Raigo went on hunger strike until it killed him.

His angry spirit returned as a plague of rats called Tesso which attacked the libraries of Kyoto. In particular the temple libraries of Enryaku-ji. A rival temple who helped convince the Emperor to renege on his promise.

Ono no Komachi was born around the mid 9th century and was possibly a lady-in-waiting under Emperor Ninmyō and Emperor Montoku. It is well attested she was a woman of great beauty who treated her lovers cruelly, however, it is likely this is merely a legend. In fact there are many legends now revolving around her it is difficult to separate the truth from the myth.

Her poetry is collected in numerous works including the Kokinshū and Gosenshū, however, only 21 poems attributed to her are seen as authentic. There are many poems attributed to her in later sources that may likely not be hers. The Komachi-shū (Collected Poems of Komachi), created after her death also contains poetry that is unlikely to be hers.

Famously one of her poems can be found in the Ogura Hyakunin Isshu (One Hundred Poems, One Poet Each). Her poem is the 9th in the anthology and reads:

A life in vain.
My looks, talents faded
like these cherry blossoms
paling in the endless rains
that I gaze out upon, alone.