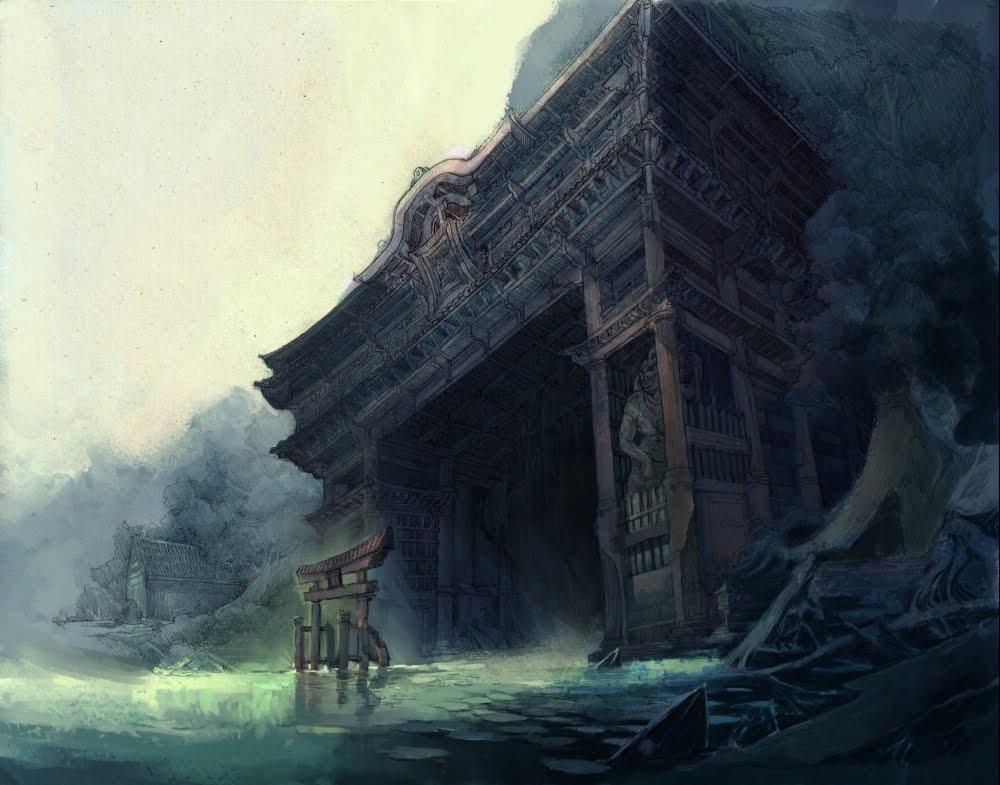 Show Notes for episode 16 of our Podcast – The Devil’s Gate.

We have portrayals of the Yokai known as the Oni, which Heather mentioned in the previous episode about Momotaro. You can find his depiction in his Yokai compendium called the Konjaku Gazu Zoku Hyakki. He depictions are interesting as he would often include a small titbit of information alongside the pictures. Sekien states for the Oni that they are names after the direction of the north-east, which is called the Kimon. Kimon translating to the Devil’s Gate or the Gate of the Oni.

So what exactly is the Devil’s Gate.

Now the devils gate as we have said is the name for the direction of the North-East, based on the Chinese Zodiac. You can even buy compasses that instead of showing the cardinal directions they instead have the kanji for the zodiac creatures on them so you known in which direction you can find the Kimon.

Now this directions is known for its extreme bad luck, for it is the direction in which demons, evil spirits and supernatural creatures pass through. Now there are certain ways to block this ill luck, and to stop these creatures from gaining entrance.

Now take a look at these two pictures (taken from the official websites), one is a plan of the Kyoto Imperial Palace and the other of the Tokyo Imperial Palace. You’ll see that there in the walls of the Kyoto Palace and the moat of the Tokyo Palace that in the north-east side there’s a notch, and this would be effective in halting the ill luck from gaining entrance into the Palaces of the Imperial Family.

On Mt. Hiei , the temple for Enryaku-ji, which we mentioned all the way back in Episode 2 was built was constructed in helping to block these evil spirits. This temple built to the north-east of Kyoto, and temples were a way of halting and deterring these creatures and bad look because of them being holy places. Of course some would say this is not the reason behing Enryaku-ji as it was built 6 years before Kyoto even existed; but its a nice theory none the less. Similarly, mentioning again the Imperial Palace in Tokyo. When it was first constructed by Tokugawa Ieyasu it was known as Edo Castle, and the Kanei-ji Temple in Ueno Park was contracted to protect it from the kimon because Ueno hill is located in the devil gates direction. Senso-ji is also purported to act as a barrier in Tokyo to malignant spirits.

Houses with an entrance which faces this direction are thought to be extremely unlucky and so it is best not to live in them and it is said that when buying a house you must take into consideration where the kimon within the house is, if there is a window or a door there then it is best to find somewhere else to live. Rooms such as the kitchen or the bathroom are seldom constructed in the north-east corner of a Japanese home. It is even said that when building a house water pipes for example will be laid in a way to avoid the north-easterly section of a home.

Alternatively, if you have to move into a house with the bad luck of the kimon, one should first retire to a house full with good luck and stay there for a short while before taking this good luck to the house of ill luck to in a way exorcise it.

And finally, if you live in a part of Japan where you’re lucky enough to have a garden, it is said that you must not place a stone that is more then 1.5 metres in height in the north-east as it will allow devils to enter your property.

Sarumaru Taifu, also called Sarumaru Dayu (猿丸大夫) lived during the mid 8th century, or so we believe. This poet may in fact have never existed in the first place as there are no records to prove he ever lived.

He was listed by Kinto as one of the Thirty-Six Poetic Geniuses and there is a later collection of poetry known as the Sarumaru Dayū, but due to the fact this man may not have existed it is highly unlikely this poetry collection was penned by him.

His poem from todays episode goes as follows:

In the deep mountains
making a path
through the fallen leaves,
the plaintive belling of the stag-
how forlorn the autumn feels.