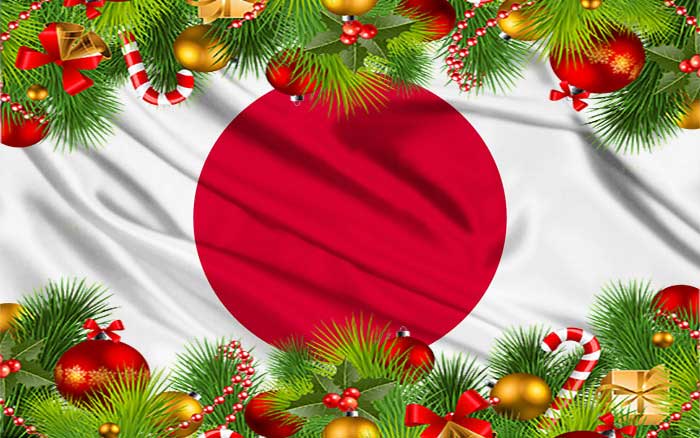 Show Notes for episode 24 of our Podcast – Christmas in Japan.

Christmas in Japan is a different atmosphere that the one you might be used to. For both Thomas and myself, we are used to Christmas being the most important holiday of the year. Many people have the day off and celebrate with big meals and piles of gifts. However, in Japan it’s just another holiday like Valentine’s or Halloween.

There are certain traditions that have been started here, but they are more recent and are influenced by a few different countries as well as Japanese culture.

Let’s start with almost everyone’s favorite, PRESENTS!!!  If you give a Christmas gift in Japan, it’s usually to your sweetheart/significant other, or children. And the gift may be on the smaller side – you see, the end of the year is the biggest holiday in Japan  and most people have to buy gifts to send to friends, family, and coworkers. Many people in Japan get their second bonus of the year and that goes to buying gifts as well as the end of the year money to children called “otoshidama.” So buying Christmas gifts at the same level of America, for example, would just be too much.

Season’s eatings – Kentucky Fried Chicken is the biggest name you might hear if you hear about Christmas in Japan. Based on research, it looks like the KFC/Christmas connection was started by an advertising campaign back in the 70s. Today, most restaurants and grocery stores offer several options for Christmas meals but the main theme is chicken, fried or roasted.

You also have to have a Christmas cake for your Christmas meal. Strawberry cake is the most popular one (at least based on the advertisements you might see leading up to Christmas), but there are several varieties and flavors to choose from.

The day to celebrate Christmas is usually December 24th, Christmas Eve. You might even have giant lines outside cake shops and KFC and the deli shelves filled with plastic bins or buckets of chicken. Christmas decorations might even be taken down on Christmas evening too.

Christmas Eve is often known as a dating holiday too. The idea of Christmas being a family holiday seems to be a newer one, and the idea of decorating and presents seem to be more popular these days as retail perhaps wants to get in on the Christmas action they see happening in other countries. At least, that’s the sense I’ve gotten from the professor, other friends, and just what I’ve seen here in the past three years.

So if you feel that the holidays are too hectic, or you just have had enough with cooking a big meal and want to take it easy, next year grab yourself some chicken* and some cake* and take it easy!

*For those who don’t eat meat/sugar/processed foods, please celebrate with the alternative of your choice. 🙂

Todays song is titles Snow and was written by the Japanese Board of Education. We believe that it was create by them to be used in teaching songs to Japanese students of Primary School age.

The first verse goes as follows:

Fall snow, fall hail!
As it keeps falling
It piles up and up.
The mountains and fields wear cotton wool hats.
The bare trees become covered in snowy flowers.