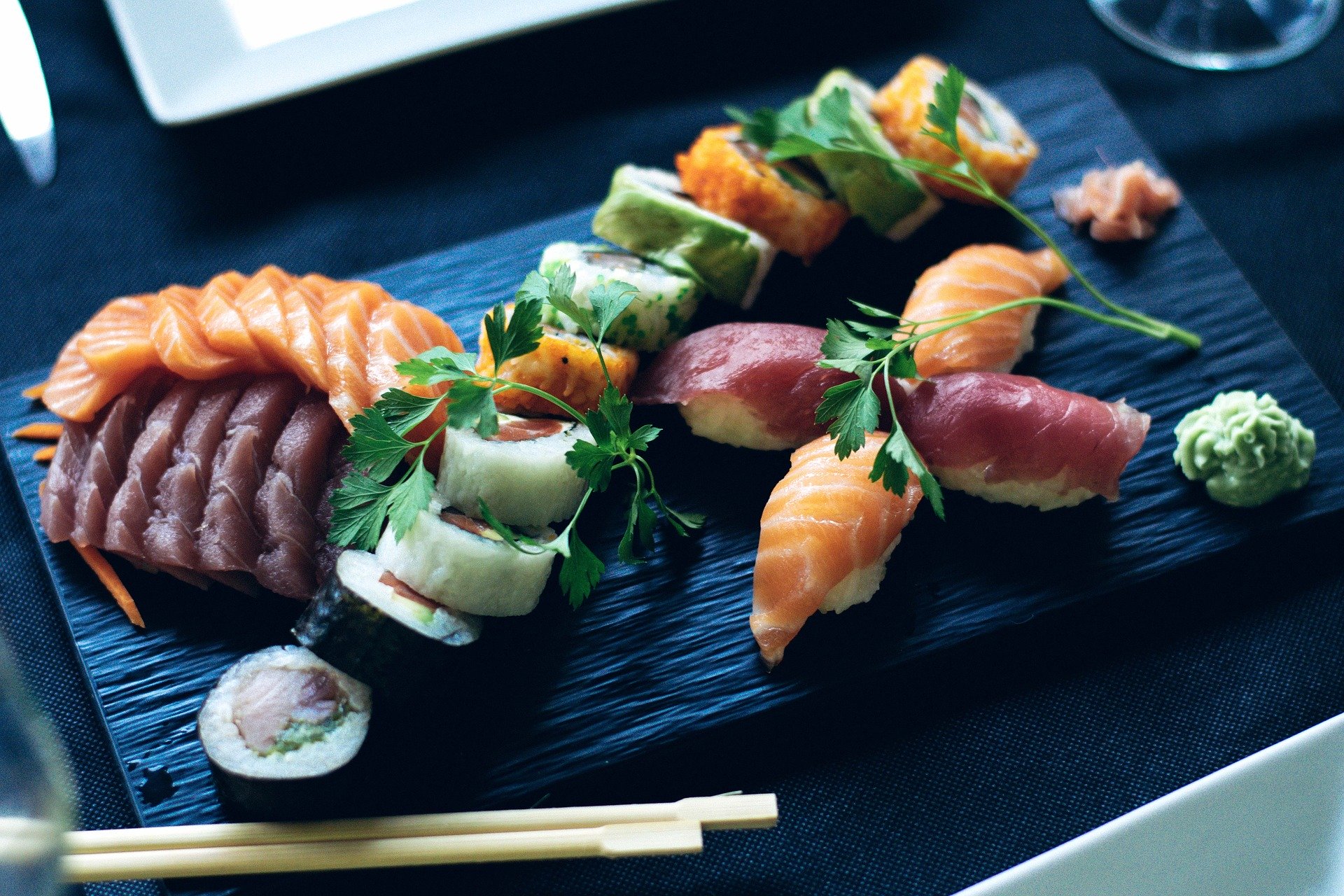 Show Notes for episode 47 of our Podcast – Sushi.

Depending on where you get your sushi, you might picture something different.

You might picture a bar with a chef, making and serving sushi in front of you. Maybe you get your sushi from a conveyor belt. Maybe you pick up a plastic container at the grocery store.

But the sushi that we eat today – is a more recent invention. Especially if you eat your sushi with mayonnaise inside (and no judgement here – the professor, who is Japanese, loves American sushi. He often gets California rolls. There is no sushi judgement here, only appreciation! You do your sushi as you like, or not at all! Only sushi love here)

Let’s talk a little bit about the origins of sushi – and a quick note, I’ve pulled from several sources BUT food origin history can sometimes be debated and updates can change based on new findings, so take this information with a grain of salt. And maybe perhaps a bit of vinegar.

Sushi could be said to have origins dating back to the BC times – perhaps around Southeast asia. People in this region would preserve fish by pickling in a mixture of salt and rice for a long time, sometimes months. With this process, only the fish was eaten and the rice was tossed out having served its purpose as a pickling agent.

Okay, let’s stop here and talk about pickling. Pickling is a way to preserve foods for a long time. Pickling causes good bacteria to form which munches away on the food itself, causing lovely fermentation. This fermentation creates lactobacillus and other bacteria, something that can help with gut health – keeping your internal parts moving along in a healthy way. Also, some vitamins from the vegetables and fish are preserved, which is important as we’ll see later.

Now back to sushi. Well, it looks like sushi made its way to Japan around the 700s, as its first mention seems to be in a tax book called the Yoro code.

The sushi eaten around this time was called “Narezushi” and “Kusarezushi.”

There’s also a mention of sushi around the 12th century – in the Konjaku Monogatarishū. Around the time of the shogunate. And it’s around the time of the shogunate that vinegar was added to sushi. The vinegar, which enhanced the fish’s flavor, allowed for a shorter preservation time which also meant the rice could be eaten. The rice had previously been tossed out, which was mottanai (or wasteful) Oh, and cooking methods also changed during this time – but let’s save that for another podcast.

Which takes us to… the Edo period! Let’s get introduced to Hayazushi. This technique used vinegar to shorten fermentation time. This sushi was also pressed using heavy weights then sliced up. And these pieces are MUCH bigger than we are used to seeing today, closer to onigiri size or palm size (depending on the size of your palm I guess!). I know this style of sliced sushi is sold in the grocery stores in Japan and in places like Sushiro.

It’s also during the Edo period that Nigirizushi was born! I bet you’ve heard of this one. It’s around today and you may have had it or at least seen it on a sushi menu, depending on where you go. This came from Yohei Hanaya, and consisted of fish – preserved with vinegar or cooked – then placed on top of vinegared rice. So, the sushi that we think of today was more like the sushi during the Edo period.

Also sushi in the Edo period was served via wooden carts called kiosks that could be carried on the shoulders and set down allowing the vendor to sell anywhere. The original fast food place!

Oh, I mentioned earlier about vitamins? Well, the pickled vegetables gave some much needed vitamins to prevent “beriberi” – nicknamed “Edo disease” since many dwellers of Tokyo seemed to suffer it. My guess is that if you live in the city, your access to fresh fruit and vegetables during this time was more difficult, so those pickled vegetables were truly almost medicinal.

But – there aren’t food kiosks for sushi in Japan – well, unless you go to a place that HAS kiosks or food carts but in a lot of Japan these aren’t around. How did sushi get to restaurants?

During the 1920s, the great Earthquake in Tokyo happened. So many buildings were leveled, and required a restoration of the city. Land prices were cheap to encourage this rebuilding, and the sushi kiosk owners opened restaurants. Thus, the sushiya was born!

OH, the fish! What kinds of fish were used for sushi? Well, historically fish like mackerel were used for sushi – fish that had few or maybe a skotch parasites but fish that could be safer to eat. Fish like salmon were not used because they had too many parasites (This was told to me by the professor) But of course if you go now, there’s salmon as far as the eye can see. How did that happen?

The answer is TECHNOLOGY! Modern refrigeration gave us the technique of deep freezing the fish to kill parasites. (Okay, well a human figured it out but… I digress). If you eat sushi now, more than likely (I would guess around a 90some percent chance) that you are eating previously frozen fish. And that’s a good thing, because when you eat sushi you would prefer if your sushi didn’t eat you – by way of parasites. It’s still fresh, it’s just safety fresh! Although – some parasites can happen, such as the recent story of the lady in Tokyo. Just… look it up. If you are worried about sushi – the amount consumed, at least here in Japan, should help reassure you that the danger, while present, is on the minimal side. (But according to guidelines, if you are immuno-compromised, pregnant, a child, elderly… etc check with you doctor if you are worried. Or just check anyway, I’m not a medical expert so take my advice with a little vinegar. Preferably rice vinegar although I am partial to an apple cider vinegar too).

So now we are in the 20th century. How did sushi get around the world? Well, I’m just going to focus on the US and UK today to keep things short (haha), plus I want to research this more myself!

This dish came to the US in the earlyish (or pre) 20th century with Japanese immigrants during the Meiji period. There’s a whole history there too – but that’s another podcast. But it’s during the 1960s that sushi gained popularity and more restaurants were built in several cities, allowing more people to experience this culinary delight.

In the UK, it was in the 1950s with a visit from the Japanese prince to Queen Elizabeth II.

Types of sushi – there are soooo many. Not just that but there is also popular sushi in each country. And – here’s a little happy thought for you. If you eat “American” style sushi for example – yes, it’s still sushi.  Modern sushi, while having roots in Japan, has truly become a global food. And even in Japan we’ve got hamburger on sushi rice, beef on sushi rice, and fried chicken. So, depending on where you go sushi has become an interesting and innovative form of culinary expression.

Now, personally I’ve never been to a high end restaurant. I am sure the experience is VASTLY different and it’s one I hope to experience someday. In fact, I’m gonna share with you a website I used during my research and one I’d like to explore – once I can ever get to Tokyo (sad noises). Sushi University! Thomas, you and I might need to add this to our list which is now probably several pages long.

I’m including a list of different types of sushi, and I’m sure we will mention it during the podcast.

So there you go! A brief history of this food. Very brief, lightly detailed, a small nibble that hopefully leaves you hungry for more. Or just hungry.

Fallen blossom doesn’t return to the branch, a broken mirror can not be made to shine

What’s done is done; “There’s no use crying over spilled milk”

Notes from the website we found this proverb (see references below):