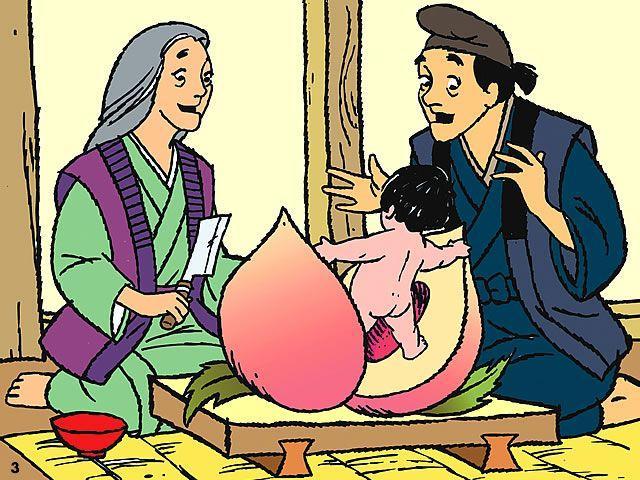 Show Notes for 15 of our Podcast – Son of a Peach. Also known as the Peach Boy.

Mukashi, mukashi, there lived an old couple. This couple was very happy, but they never had a child. They spent their days on their farm doing chores.

Now, the old woman liked to wash her clothes at the same place by the river. She was very proud of how clean her laundry was and she worked very hard to make it “pika pika”, or sparkling clean. Well, on this particular day, she was getting ready to take her laundry home when, bobbing along the river, there was a huge and delicious looking peach!

“Oh! I must get that peach! It will be a wonderful treat for my husband and I to share!”

She grabbed the peach from the water, put it in her basket with all her clothes, and headed home.

Her husband was tending the fields close to home, so when she arrived “Anata! Come! Let’s share this peach I found by the river!”

‘Eh” he said. (He was a little hard of hearing) But he came all the same.

The old woman grabs her knife, but before she can cut the peach it splits in two and out pops a baby boy!

The couple, shocked but very happy, decide to name him Momotaro, since he was born from the “momo” or Peach.

Momotaro grew big and strong and brave! He always helped his family and those who were in need around his home.

One day Momotaro happened to hear about the Oni (or ogres) from Onigashima Island harassing and stealing from a neighboring village.

“Mother, father, I must go. I must go and help drive away the oni.”

“It’s too dangerous!” His parents said.

His mother, seeing that her son was determined to go, decided she would make him some food for his journey. She poured all her love and hopes and wished for Momotaro to complete his quest into the kibidango that she made.

“Here, take these kibidango! I hope they will give you power and strength!”

Momotaro heaved his bag filled with kibidango on his back and set out on his journey.

He hadn’t gone too far when he saw a dog.

“Greetings! Where are you going? And what’s in your bag? It smells sooo delicious.” He sniffed the air and panted.

“I’m going to Onigashima to defeat the Oni! I’ll give you a kibidango if you wish to come with me!”

“Yes I will!” Momotaro gave his new friend a kibidango and the two friends set out.

A short time later they heard a noise in the trees and down swung a monkey!

“Hello hello! Where are you two going and, huh, what’s that in your bag?”

“We are going to Onigishima! We are gonna defeat the Oni!”

“It’s kibidango! If you come with us, I’ll give you one!”

“Yes I will! Kibidango, if you please!”

Momotaro gave his new friend a kibidango and the three friends set out.

They were getting close to Onigashima Island when they heard a ruffle in the nearby grass. Out popped a kiji (a kind of pheasant).

“Ooo ooo What’s that you have in your bag! And, where are you off to?”

“We are going to Onigashima!”

“To defeat the Oni!”

“It’s Kibidango! If you come with us, I’ll give you one!”

Momotaro gave  his new friend a kibidango and the four friends set out.

At last, they reached the shore across from Onigashima! They boarded a boat. One the way, they ate their kibidango.

When they reached the misty shore, they spied an oni!

“Oi, what are you doing here?” He cried

“We have come to stop you from terrorizing the village!”

“Ha, you weak boy, dog, monkey, and kiji?? Do you know how many of us there are?” And like magic up popped many, many oni surrounding Momotaro and his friends.

“Yes we will!” they shouted! And with that they began to fight!

Well, what the oni didn’t know was that the kibidango had given our four friends the strength of over a thousand people! They easily defeated the oni!

“Ouch, ouch! WE are sorry! We’ll leave the village alone I swear! Please, just take the things from the village and leave! We won’t bother anyone again!” And with that tears filled the Oni`s eyes.

Momotaro and his friends, victorious, took all the stolen goods from the ogres and returned them to the village.

When Momotaro returned home, his new friends came too! They happily lived together with Momotaro and his parents for many years.

You can find more about the story of Momotaro from Okayama’s website: HERE!

You may also notice I took some liberty and changed a few small details in this story of Momotaro. My story is a combination of a few other sources I have read in the past, plus I took some creative license. The essence of the story is the same!

We know a lot about the man known as Fujiwara no Teika (藤原定家). He was born in 1162, living until 1241. The son of Fujiwara no Shunzei he was a very famous poet for his time.

We know a lot about his life from his dairy which was called the Meigetsuki. He grew up during the Heian and Kamakura Periods and partook in many poetry competitions as well as acting as a judge. Known examples were competitions known as the Hyakushu, in which a poet would right 100 poems around a specific theme to be then later judged.

He was close to the Emperor Go-Toba, prior to as well as after his abdication as emperor. Though this friendship would soon find itself on rocky ground.

These poems, though they fit into the poetic theme the Emperor had asked for, were full of hidden meaning to show the Emperor the anger Teika was feeling towards being made to be hear reciting poetry instead of honouring his mother. One could analyse the lyrics from one poem as saying;

‘let us compare which one of us has a greater grevance. [The Emperor] is angry because I declined to come to his party; I am angry because he belittles the affection in which I hold my late, dear mother.’

It is noted Teika was sent from the palace after angering the Emperor and it is fortunate that this was all that happened to him. Such a break of decorum could easily have seen Teika stripped of his lands and titles because of this.

The mountain that I
should be able to see clearly
have misted over-
this spring night’s moon
belongs to someone else.

A willow in the meadow
by the side of the road
has secretly bloomed
vying against the smoke
of my smoldering lament.