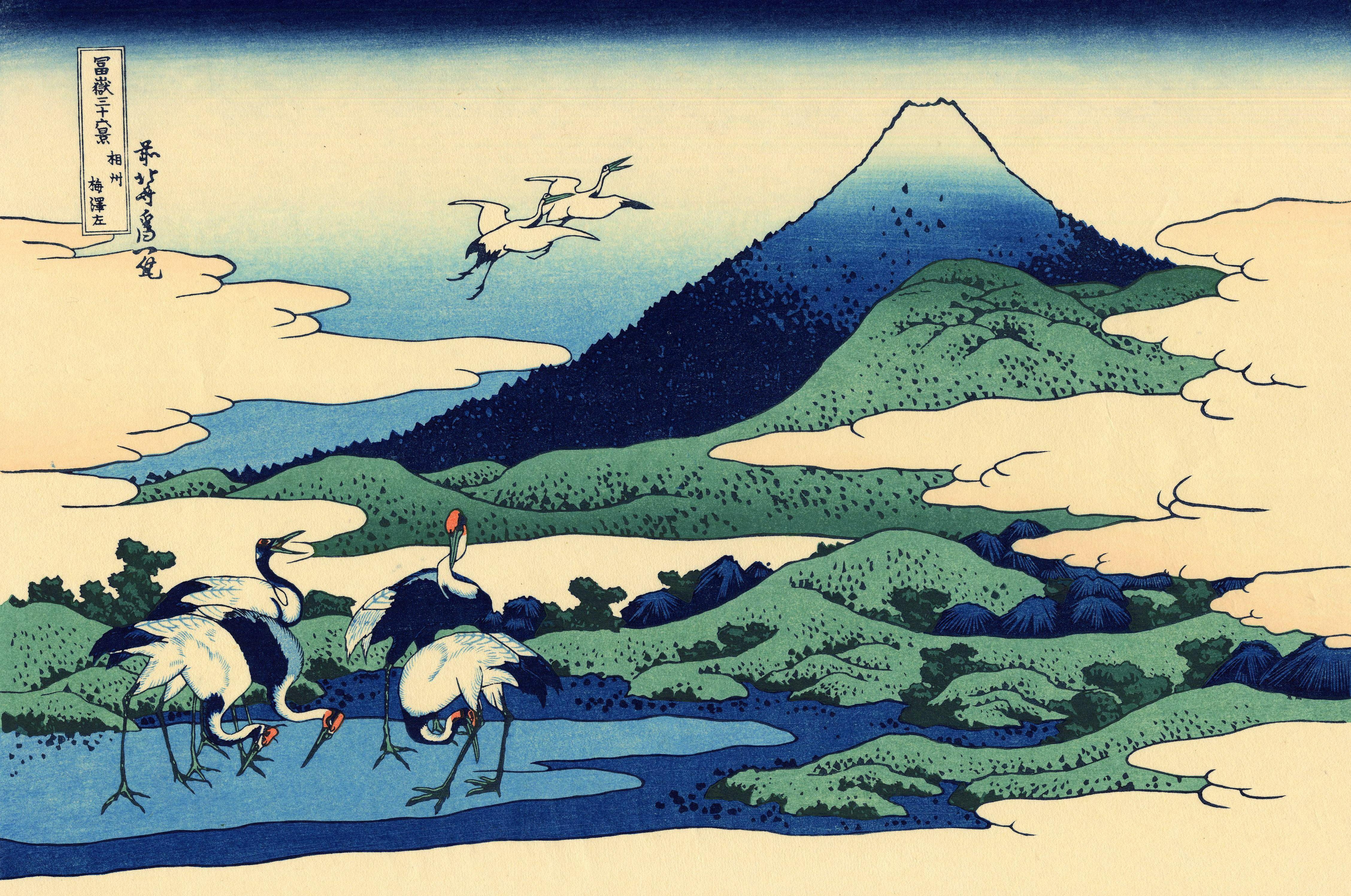 Show Notes for EP14B of our Podcast – Hei! Say my Name. Tales of Fuji.

Now, after researching this lake I have been unable to find any stories linked to it. So if I am missing something, and if you’re listening an no I story I might have missed please let us know. For the time being all I can tell you is the more sparse, concrete facts about the lake.

This lake forms a group known as the Fuji-san Goko, or the Fuji Five Lakes. Now all of these lakes, including Motosu were formed due to lava obstructions in the past in the valleys of the Misaka Mountains. Out of these five lakes Motosu is the deepest, at a depth of 122m.

History of the Mountain

Fuji San is the highest mountain of Japan reaching a height of 3,776m. It has 3 subsidiary volcanoes by the names of Komitake, Ko-Fuji and Shin-Fuji. Shin-Fuji being the most active has actually covered the other two in cinders and lava.

We have records of its various eruptions and our first record of Fuji erupting dates all the way back to 864AD.  The mountain has widely been seen as sacred in both Shinto and other faiths, such as the Fujiko which combines both Shinto and Buddhist elements.

In fact it was the Fujiko sect that established the custom of dividing routes to the summit into 10 stations of stages; although I believe now there are only 8 stations. Due to its historical basis of being deemed sacred, women weren’t allowed to climb the mountain until 1872.

Legends say that the sand which is disturbed during the day by pilgrims ascending the mountain would re-ascend to its former position at night. According to Buddhist tradition, Fuji rose from the earth in 286 BC after an earthquake that also created Lake Biwa.

In art Mount Fuji is the best known from Hokusai’s 36 Views of Mount Fuji, Hokusai being in his 70’s when he created them. In actuality there are 46 prints. As an additional 10 were created by Hokusai after the original collection.

There was also my the same artist something known as the Fugaku Hyakkei, in English the 100 views of Mount Fuji which was published as a sequel book of sorts to the initial 46 prints.  You can actually go see a lot of his prints in Nagano Prefecture. If you ever are in Nagano city you can take a train to the small town of Obuse where Hokusai would spend his time, and there is a museum there housing both the 36 Views and the 100 Views of Fuji in addition to his other works. And having been myself, I would highly recommend going.

These days the mountain is made up of two Kanji, these being the Kanji for abundance and soldiers/samuria.

However there is much debate as the origins of the name. It is worth mentioning that there is a folktale known as the Tale of the Bamboo Cutter, where Fuji is said to be derived from 不死 fushi which would translate as Immortal .

There are others that cite it as an ancient name stemming from the Ainu language namely the Goddess of Fire by the name of Huchi but some have contested that and cited it as relating back to the time of Yamato. There is even some who state it could relate to old Eastern Japanese and there word for ‘Fire Master,’ 火主. This was originally pronounced pu suzi, and over time became shortened to puzi and it similar to Fuji.

The Deity of Fuji

There are some that cite the Goddess of Fuji as being Kono-hana-saku-ya-hime. Now, she is interesting mythologically as she is stated to have the one to have married Ninigi, He was the grandson of the Sun Goddess Amaterasu, and he would later be the great-grandfather to the first Emperor Jimmu.

It is said that upon the summit of Mountain resided her palace and that the Goddess could be seen floating over the crater in a luminous cloud at every moment attended to by invisible servants who would throw down any pilgrim who attempted to climb the mountain if they were not pure of heart.

One tale from the Shintoshi recounts a tale of Fuji, this document coming form the 14th Century giving tales of various gods. The story is set during the reign of Emperor Yuryaku, the 21st Emperor from the Kofun Period and goes as follows. Now I want to say that this story has a lot of similarities, for those who known it, with the Folktale The Bamboo Cutters Daughter. But to give you some idea, the character of Kaguya has the same name in both tales and her origins and again the same.

There was once a couple who were sad as they had no child. This couple living at the foot of mount Fuji. Then one day they found themselves happiness, they found a little girl hidden in the bamboo grove behind their home. Seemingly having appeared from nowhere. This girl was special, shining with light and so they called her Princess Glory, or Kaguya-hime in Japanese. She grew up to be the most beautiful woman and news reached a local governor of her beauty. And so he approached her and they courted for some time before finally marrying.

Many years later, once the old couple had passed and been lain to rest she revealed to her now husband that she was not of this world, all this time he had been married to the Immortal Lady of Mount Fuji. She had come all those years ago to give the old couple happiness, and now they were gone from the land of the living nothing tied her now to this place. And so she had to return to her palace at the mountains summit.

Now it is interest to note here that, as we have said, Fuji may have been derived from the word for Immortal, and here we have a Goddess who name includes the world Immortal. The Immortal Lady of Mount Fuji.

The governor, her husband didn’t wish her to leave, and so she said he could see her if he climbed to the summit. And failing that he could look at her using a box of incense which she left him as a parting gift. And so she returned to the mountain, leaving her husband alone.

He used the box but could only see an indistinct shadowy form and so he endeavoured to climb the mountain. At the summit he found a lake, with an island in its centre, and upon it the palace of Kaguya-hime. But, the vapour which rose from the lake only gave him the most fleeting glimpses of his wife, and so disappointed and alone, he clutched the box to his heart and jump from the precipice of the mountain to his death.

The Elixir of Life

The story goes there was once an Emperor of China, who heard that Mount Fuji came into being in one night. From this he instantly believed that Mount Fuji must contain the Elixir of Life. And so he set sail to Japan with a number of handsome youths and maidens for Japan. They sailed through storms which luckily eventually abated and before them they could see the rising slopes of Fuji. They ascended the mountain, near it summit the Emperor running ahead, wanting to be the first one to take a drink from the Elixir of Life so that he may never grow old. But later, once his companions caught up with him they only found his body lying on its back with a smile upon his face. He had found his Life Eternal, but would carry it out in the land of the dead.

Yamabe no Akahito (山部 赤人 / 山邊 赤人) lived during the first half of the 8th century. During his life he acted as a courtier as well as bureaucrat giving his service to the Emperor Shomu.

Not much else is really known about his life. We know he was ranked as one of the Four Great Poets of the man’yōshū Period and was listed by Kinto as one of the the Thirty-Six Poetic Geniuses. All together he has 13 chōka poems and 37 tanka poems in the man’yōshū.

Coming out on the Bay of Tago.
there before me,
Mount Fuji-
snow still falling on her peak,
a splendid cloack of white.

Feature Image: Umegawa in Sagami Province, one of the Thirty Six Views Of Mount Fuji, Hokusai.