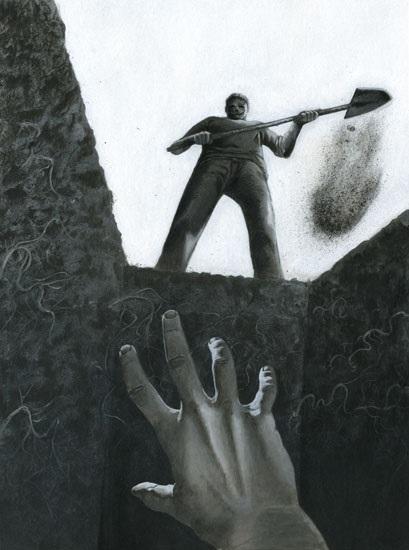 Show Notes for episode 17A of our Podcast – Human Sacrifice.

Archaeologically speaking, the act of human sacrifice has never been documented in Japan. So I want to look into the old tales told of this practise.

In times long past there was the belief that the bow possessed supernatural powers. And at times it was said one would suddenly appear on the roof of peoples homes showing them that a sacrifice had to be made. This sacrifice being the eldest unmarried daughter of the household. Now over time the bow has become a symbol of security instead. However, during these times the girl would then be taken from her home and buried alive so that the ‘God of the Wild Beast’ could consume her. Now the reason behind this was so that the family would be blessed with good hunting.

Another practise was that, should someone of note or higher ranking die then a number of people would be buried up to their heads in a circle around the deceased. As their heads were still exposed it allowed them to mourn and wail for the deceased until they were eventually attacked by wild animals and their faces eaten. The records say that such practises were eventually ended during the reign of Emperor Suinin.

The story surrounding the end of this practise goes as follows. On the 25th day of the 6th month in 781 a petition was addressed to the reigning Emperor Kammu by a member of the Haji Family.

This family, known as the Haji Clan in Japanese (who oversaw the Haji Be) came asking permission to change their family name to Sugawara. The place in which the family now dwelt. But anyway, that has nothing really to do with Human Sacrifice, so let’s move on to what the petition had to say.

According to the petition brought by Haji no Sukune Furuhito in days long past the practise of human sacrifice was still undertaken, with the high ranking nobles retainers buried alive alongside them as we have already states. The event he cites is the death of Empress Hibasuhime, upon her death it was asked what should be done; many cited to continue the practises of old and to bury people alive with her. However, a man known as Nomi no Sukune is said to have spoken up. Nomi was an ancestor of the Haji Be and stated the following.

‘It is my humble opinion that the practise of burying retainers alive is absolutely contrary to the principals of the benevolent government and is not the way of developing the nation and benefiting the people.’

And so Nomi took 300 potters with him, and crafted clay into many different images of people and things which he then presented to the Emperor Suinin. The Emperor upon seeing these creations was pleased and used them to replace the burying of living people. The Emperor dubbed these figurines Haniwa.

Now this story comes from the Uji shui monogatari.

The Gods of Mimisawa are a snake and a monkey. These Gods go by the names Koya and Chusan. Every year they would receive a sacrifice in the form of a pretty girl with long hair and fine white skin.

A girl was chosen, and she spent her days in mourning for her future death until one day a hunter appeared. He was large and strong, and learning of her sad fate wished to know what she could have possibly done in a previous life to have earnt such a horrible end to this one.

He said that it would be best for him to kill her, to give her a quick and easy death instead of suffering at the hands of the gods and her parents agreed.

But, when he laid eyes upon her, his beauty made him change his mind. And so a new plan formed in his mind.

He told the parents of the girl to stretch a sacred rope around their home, and to say it is to purify their daughter for the upcoming sacrifice and to allow no one to enter.

The hunter spent days sharpening his blades, spending time with his dogs who he had trained to kill monkeys, and wiling away the hours with the girl who he now loved. The girl he would sacrifice himself for. They talked every day, the girl grateful that she would now live.

The day of the sacrifice finally came, the priest appearing at the home with a box for the girl to climb into.

The hunter takes her place instead, carefully climbing inside with his dogs and the weapons he had been sharpening day after day.

The priests take the box, unaware of the man inside. They reach the shrine, open the sanctuary doors and leave after placing the box inside as offering.

The hunter carved a spyhole in the box to see the Gods who would take his life.

There was a giant monkey, 8ft tall with a red face and long glossy white fur. The God was surrounded by 200 monkeys, a carving board and knife laid out before them.

The giant monkey, the god, approached the box and undid the lid.

As soon as it was free the hunter cried for his dogs to attack. They grabbed the god, the hunter leaping from the box to forced the god onto the cutting board; a sword against the monkeys throat.

He screamed at the god “what do you get for killing and eating people. Listen to me! I’m going to cut of your head and feed it to my dogs! All these years you’ve been eating women and leaving people childless! Now your head comes off!

All the while the dogs had chased all the monkeys into the nearby trees, who now were screaming so frantically the mountains rang with the sound.

The god possessed one of the nearby priests and begged for his life. “The practise must stop!” He said, “I have learned not to kill humans. Priests, don’t harm the man who came to punish me. Leave the family who was supposed to make an offering alone. From now on I shall protect them and their descendants! Priests, beg this man for my life! I am in danger!”
The Priests came and made promises that their god had learnt his lesson, and the hunter relented, taking the sword from the gods throat.

And from then on, the practise stopped and only boar and deer were served as offerings.

The hunter, the girl who he later married, and her parents all were safe from that day onwards.

We don’t know much about Moriya Sen’an. We know he was a poet who wrote Death Poems, and the man himself died in 1838. He wrote a humerous death poem which uses his own name within its lines as a humours notes.

Bury me when I die
beneath a wine barrel
in a tavern.
with luck
the cask will leak.