EP20 Sole Japanese aboard the Titanic 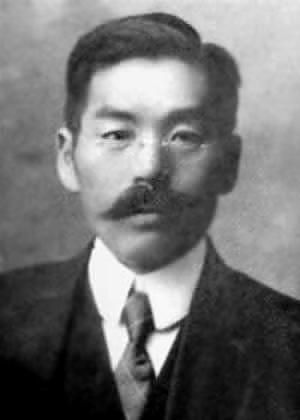 Show Notes for episode 20 of our Podcast – Sole Japanese aboard the Titanic.

So today I wanted to talk about Masabumi Hosono. He was born October 15th 1870 and lived until March 14th 1939. Now we know he lived his life being a civil servant but what is interesting about Mr Masabumi is that he was the sole Japanese passenger aboard the Titanic.

Now as we know, the titanic sunk on its maiden voyage but Mr. Masabumi was one of the fortunate people to have survived and made it safely back home.

So a little bit about his life prior to the sinking of the Titanic.

Now we know he was born in the village of Hokura, which is a part of Niigata Prefecture, and after he eventually graduated from the Tokyo Higher Commercial School he found a job with the Mitsubishi Join Stock Company which he stayed with until 1897. He eventually leaves though to be a cargo clerk in Tokyo at the Shiodome Freight Terminal. Now Mr. Masabumi seems to have been a rather bright man, going on to learn the Russian language which led him eventually to working as a railroad director and subsequently this had him sent to Russia where he was tasked to undertake research into the Russian railway system at the time.

And it was because of this he found himself aboard the Titanic. On his way back to Japan, he ended up in London, then Southampton where he boarded the Titanic April 10th 1912 as a second class passenger.

As we know the Titanic was hit by an iceberg on April 14th, merely 4 days after its maiden voyage and Mr. Masabumi found himself rightly fearing for his life.

It is said that he was awoken by a steward during the night, but then found himself trapped below deck as he wasn’t allowed up to the boat deck from where the life boats were being launched.

Now from what I can tell, this was because the crew at the time believe him to be a third class passenger. Now of course, in the Titanic film, we see the third class passengers locked down below and left to drown. However, there is no proof that this ever occurred to anyone aboard.

The third class area did have these gate which could be closed so they couldn’t access other part of the ship, but this was because these people were immigrant heading to America wanting a new life. They were kept separate for fear of spreading disease and so that once they reached Ellis island they could all be unloaded separately to everyone else.

So eventually, Mr. Masabumi makes them realise he is a second class passenger and so they allow him onto the boat deck above.

Now if that makes you wonder what happened to the first class passengers, as far as I can tell, every class aboard the ship had their own deck and allocated lifeboats. But no lifeboats were stored in the third class section meaning these people had to find their way to the boat deck, which was a first and second class promenade through a maze of corridors, meaning it would take them longer to reach the sanctuary of a lifeboat.

Now going back to Mr. Masabumi, when he eventually reached the boat deck where he saw the emergency flares being fired.

He writes after the events that:

All the while flares signalling emergency were being shot into the air ceaselessly, and hideous flashes and noises were simply terrifying. Somehow I could in no way dispel the feeling of utter dread and desolation.

Mr. Masabumi saw the lifeboats dissipating quickly as they were filled with women and children. Now, the concept of ‘women and children’ first at the time was more of a western concept than a Japanese one, but I will come back to that.

So he sees the lifeboats filling up and eventually the 10th boat is nearly filled.

I found myself looking for and waiting for any possible chance for survival.

And he was in luck, considering how many lost their lives on this day.

He heard the boat crew on the 10th boat say there was room for 2 more and Mr. Masabumi saw a man jump aboard.

And so in his own words:

the example of the first man making a jump led me to take this last chance.

And so he boarded the 10th lifeboat.

He says that no-one realised he was a man after boarding, that the men in charge were busy with other things and that because of how dark it was it would have been extremely difficult to make out who was a woman and who was man.

When the ship finally sunk he says that the lifeboat was filled with the sobbing of mother and children who feared for their fathers and husbands. Mr. Masabumi comments that he was a much depressed as they all were, not knowing what was to become of him in the long run after they hopefully reached safety.

Now as we know, the other survivors were all luckily rescued by the RMS Carpathia and once aboard he began to write. Now what he wrote is special in a way in that it is the only known document that we know which exists to have been written upon the stationary aboard the Titanic.  So what did he write? Well, firstly, he wrote a letter home to his wife in English, and secondly he used the time aboard the Carpathia to write an account, this time in Japanese of his experience aboard the doomed vessel.

So in the aftermath of everything little attention was actually given to him and Mr. Masabumi finally began his journey home. He went from New York, to San Francisco and there found a ship back to Japan. A local newspaper finally got a hold of this story and dubbed him as the ‘Lucky Japanese Boy’ and he even found himself being interviews in several newspapers and magazines. The Yomiuri Shimbun even ran a photo of him as his family.

Unfortunately this didn’t last for him. Around the time of the release of the Titanic film an article released at the same time stated that Mr. Masabumi eventually found himself being publicly condemned for his actions. He was described by some as a stowaway with others who had been in charge of the life boat said they only way he could have got on board was if he had disguised as a women. But I should say that that particular story was never reported in Japan, only abroad.

Sadly because of all of this he lost his job and was deemed a coward by the Japanese press. The article from 1997 stated that Japan even published school textbooks which used him as an example of how dishonourable he was and it became so bad he was even denounced as immoral as a professor of ethics. However, research undertaken in 2007 by a Ando Kenji states he was unable to find any textbooks which had condemned him in this way.

Several theories were put forward as to why this occurred. Some saw it as him betraying the ‘Samurai Spirit of Self Sacrifice,’ with others saying it was seen as a failure to conform and that he selfishly pushed aside other passengers to board the life boat. This all led to him being subjected to ostracism, or mura hachibu  in Japanese.

Sadly because of this, Mr. Masabumi’s story was a source of shame for his family for a long time, and it wasn’t until the release of the Titanic film when people began to more fully understand the ordeal he and others went through that he was finally forgiven and honour was restored to his family.

Whatever the real story behind this period in history, he was soon reemployed into his old job as they dubbed him too valuable to lose, and he remained working there until his death in 1939.

Fujiwara no Tadahira (藤原 忠平) was the great-grandfather of the poet Fujiwara no Sanekata. He lived from 880 to 949, and was known after his death as Teishinko (Lord Upright and Faithful). He took over from his brother (Tokihira) to lead the hokke branch of the Fujiwara Clan and also held the position of Chancellor of the Realm.

His legacy includes seven poems within the Gosenshū, and an additional six in the imperial waka anthologies. He is also noted to have left a journal entitled the Teishinkō-ki.

One of his poems is included in the Ogura Hyakunin Isshu, his is the 26th in the sequence and reads:

Dear mapels of Mount Ogura,
if you have a heart,
please wait for another visit
so that His Majesty may enjoy
your lovely autumn colors.