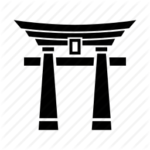 Yomi (黄泉) is the Land of the Dead or Underworld in Shinto Mythology. It is also called the ‘land that lies beneath the hard earth’s roots’ (Nenokatasukuni).2

We first see this place mentioned when Izanami dies after giving birth to the Fire-God Kagutsuchi. Her husband/brother Izanagi enters into Yomi to ask his wife to return to the world of the living with him so they can continue to make more kami and Islands.12

However states she has eaten at the Hearth of the Underworld and so cannot leave, but asks him to wait for her so she can go talk to the kami of the land (potentially implying she could leave if she convinces them?) This is mentioned in the Kojiki and not the Nihongi.2

The entrance into here, known as Hirasaka (Gentle Decline) in the Kojiki2 and The Even Pass of Yomi in the Nihongi is said to be located (according to the Kojiki) in Izumo Province, in what is now the Ifuya Pass.1 However, the entrance into Yomi is now blocked after Izanagi flees Yomi and his wife and places the boulder Chigaeshinoōkami infront of the entrance.12

The Nihongi states the entrance to Yomi is not actually a place, but ‘the space of time you take between your last breath and approach death.’1

Izanagi after leaving Yomi feels pollutes from being there/associated with death and so cleanses himself, which has lead to the association with death being something people need to cleanse themselves form after being a part of it.

There are various inhabitants that dwell here, aside from the deceased. These being, Izanami, The Eight Thunder Kami and the Shikome.2

In song it is prefaced with Shishikurono (of spitted game flesh).2

Check out the Japan Archives, our Japanese History Podcast