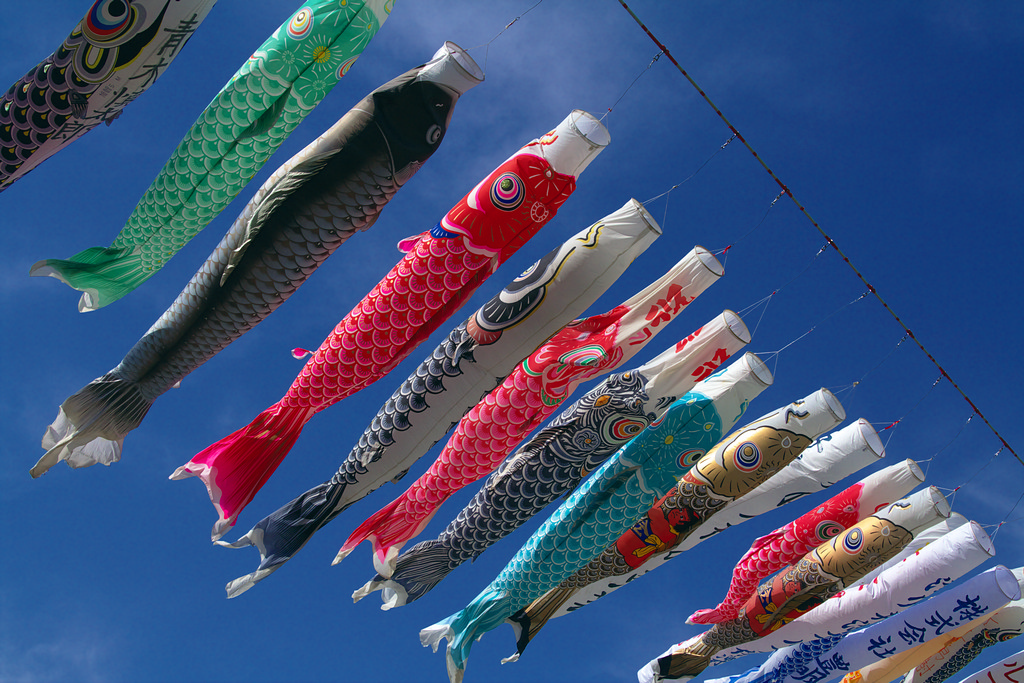 Show Notes for episode 61 of our Podcast – Golden Week.

Today Heather brought us the history of Golden Week so lets get into it.

Golden week got its start in 1948. The Japanese government established a “public holiday law” designating 9 official holidays as well as stating that when a national holiday falls on a Sunday, the next Monday will be a compensatory holiday called a furikae kyujitsu.

It’s made up of four holidays:

Originally celebrated as the birthday of the Emperor Hirohito, but after his death in 1989 became Greenery day. Then in 2007, this changed over to Showa Day to celebrate and reflect on the life of the emperor and all that occurred during this time in Japan’s history.

**Constitution day – May 3
Started in 1948, to celebrate the new constitution ratified after World War II.

Originally just another day, but the government designated this a national holiday since it was sandwiched in the middle of two holidays. From 1989 to 2006 it was a kokumin no kyujitsu (national holiday). In 2007 it was officially made a public holiday, and it could be said to honor the Showa emperor as he had a great love for plants.  It’s a chance to go outside, appreciate nature and its beauty, and to reflect on the benefits of nature.

I’ve seen this holiday stated as originally just for boys, but then also for children. In 1948, the Japanese government established it as “Kodomo no Hi” to celebrate the happiness of all children. There is a Chinese legend that if a carp can swim upstream, it can become a mighty dragon (The Pokemon Magikarp was based off this Myth). It’s a symbol of kids growing up well.

For this holiday, you have probably seen the carp streamers in pictures or images of Japan. Families who have children fly these streamers outside a carp for each child (although I have also seen it stated that the carp are just for boys, but it may depend on the family or even the location!) –  and put up samurai dolls or samurai armor -those presumably are for the boys, as a companion to Hina Matsuri. Helmets seem to be quite popular, and you can even fold origami helmets.

Children’s day is the oldest holiday in the group, and it has its origins from the Dragon Boat Festival – based on the Chinese calendar. The Japanese was called Tango no sekku. This holiday was known from about the time of the Nara period, possibly even before. Popular food eaten is Chimaki (rice cake wrapped by bamboo leaf and steamed) and kashiwa mochi (red bean and rice cake wrapped by kashiwa leaf)

And to my surprise, there’s 4 other “festival days” that go with it – Hina Matsuri (girls day), Tanabata (we’ve talked about before!), Kiku no sekku (which is a holiday I’ve not heard before and neither has the professor) or Chrysanthemum festival, and New Years.

The origin of the name ”Golden week” comes from Hideo Matsuyama, a director of the film group Daiei. Around 1951, the film maker Bunroku Shishi saw record sales for his film. Apparently, the national holidays were a very popular time to go see movies. Matsuyama san, looking towards the radio’s well known phrase “golden time” took the gold and ran with it, making the name “golden week.”

He apparently also named a “Silver Week” in fall, but it’s never quite caught on in the same way.

Golden week is a HUGE travel holiday, with many people traveling throughout Japan and overseas as well. Of course, the past couple of years have been exceptions, although travel was up this year – still nothing to the levels of 2019. Here’s hoping that 2022 will allow us to be able to travel more again!

Why does Golden week seem like more of a travel holiday than Obon or Oshogatsu? Both of these other major holidays are generally considered a time to return back to your family or spend time with family. Golden week is the longest holiday in which you can “do as you like” without the obligations. The weather is also generally mild, which makes it perfect for hiking and exploring too. It’s also the first holiday for college and University students, giving a great opportunity to travel with new friends. However, as a caveat, not all places get the full “golden week.” Some companies only allow off for the official holidays, and don’t give the extra days off. Students in elementary through high school also have to go in on April 30 – May 2, unless it falls on the weekend.

But for everyone – getting those precious days off is truly worth more than gold.

Now I tried to find a poem on Golden Week for today but I sadly could not. But I did come across one one relaxation, so I am going to take that is theme enough for today. This one is set in the Fall and concerns moon viewing dating to 1685. The poet today Matsuo Basho.

The clouds, from time to time
Allow folk to relax
When moon-viewing.