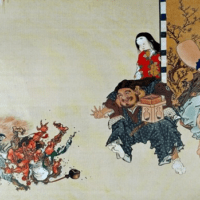 Show Notes for episode 30 of our Podcast – The Bean Throwing Festival.

There is a saying in Japan they states:

On the Eve of the beginning of the Spring Season, to place heads of sardine and holly is to ward of the devil known as Kaguhana, a devil who is said to eat man…

Now I don’t know about you, but I would much rather stick the head of a dead fish and some holly on my front door than risk being eaten by a devil, or Oni (鬼) as they are known in Japan.

And this is where the Festival of Setsubun, which is celebrated every February 3rd, comes into play.

It’s a festival of demons, holly, as we have said; sardine heads as well as soybeans. A weird mix to be sure, but there is reasoning behind the madness.

It links to other festivals that occur at this time and so falls under the umbrella of Haru matsuri (春祭 ), which translates to Spring Festivals.

Now the name of the festival could be translated as something like ‘Season Division,’ an apt name considering it marks the end of the Winter (冬) and onset of Spring (春). Although there does appear to be regional differences. I have found reference to one small village in Chiba Prefecture calling it Toshi-koshi (年越し) meaning something along the lines of ‘bidding the year out.’

Of course, that may get some of you wondering ‘but the festival is in February not the end of the year,’ and you would be correct.

However, it has to be taken in the context of the night before the onset of Spring. And the beginning of a new year full of life.

The Festival appears to have made its way to Japan from China, characterized by the adoption of throwing roasted soybeans to drive out evil Spirits. The first mentioning of the festival however, wasn’t until 935AD. Mentioned in the Tosa Nikki (土佐日記) by Ki no Tsurayuki (紀 貫之).

‘I wonder,’ Tsurayuki mused in his writings, ‘how it is in Kyoto. Are the customary decorations of straw rope, mullet head, holly and the like displayed…?’ which shows us the use of sardine heads wasn’t original to this festival, but mullet instead was.

And with that out the way, its time to learn how to banish the Oni.

The primary function of the festival is to do just that, to banish Oni which may be living somewhere nearby to your home.

Oni, it should be stated, are a type of Yokai, or supernatural being.

Be sure that you have a large bucket of soybeans on hand to throw at any pesky Oni that may be wandering around. But be sure to learn the following incantation as merely throwing the beans is not enough.

If you decide to not say the incantation, then these Oni are unlikely to leave you alone. No matter how many beans you throw at them!

And you have to understand, these creatures are not to be messed with, so I cannot stress enough, you must say the incantation.

Even the Gods of Shinto (神道) are shown to be scared of these beings, as we have depictions of the God Ebisu (恵比須) throwing soybeans himself as meddling Oni.

Ok. So now you’ve thrown some beans, and made some incantations. So what comes next?

Remember the holly and sardine heads? Well, I hope you remembered to procure some because its their time to shine.

Take your holly and take your sardine head and hang it at the entrance to your home.

If you’re wondering why.

Well, the answer is simple really. Its the eyes the Oni fear. Their eyes shining in the sunlight is too much for them to bear and will send them running.

There are a some regional differences however. Some villages are said to have hung large buckets from their roofs, covering them in mesh to mimic the eyes of the sardines. And as it turns out, were just as affective at sending the Oni fleeing in fear.

But that still leaves us with the holly doesn’t it?

Well to find our answer, we can turn our attention to a Kyōgen Play (狂言), a type of comical theatre.

In the text of one of them, we find an Oni wandering around who comes from a place called ‘The Place of Eternal Youth.’

‘I am exceedingly tired,’ the Oni moaned, ‘and I am hungry!’ He looked around noticing a structure in the distance, ‘oh, look, there’s a house! Lemme take a look.’

The Oni, wanders over, and immediately regret his decision. ‘Ouch! How painful!’ He screams.

‘I forgot all about this night being the night of Setsubun when people put holly at the door to scare us away!’

And screaming that his eyes were now in extreme pain, the Oni fled.

And there you have it. The holly is there as a final measure to protect you. Because apparently, Oni are dumb enough, or simply so unaware of their surrounding they will walk straight into branches of holly hanging from someone’s doorway and have to flee in pain.

And that’s the story of the Festival of Setsubun.

Now, in addition to all of this, Heather talked about another newer tradition surrounding Setsubun. This new tradition includes buying rolled sushi and eating it. But make sure you face the north-west and refrain from talking as you do so. (Rememeber how the north-west is where all bad luck stems from?)

His poetry appears in the Hyakunin Isshu as well as his own collection the Ninna gyoshuu. During his reign he is known to have reinstated ‘old traitions’ such as hunting with falcons

For you
I came to the fields
to pick the first spring greens.
During this time, on my sleeves
A light snow was falling