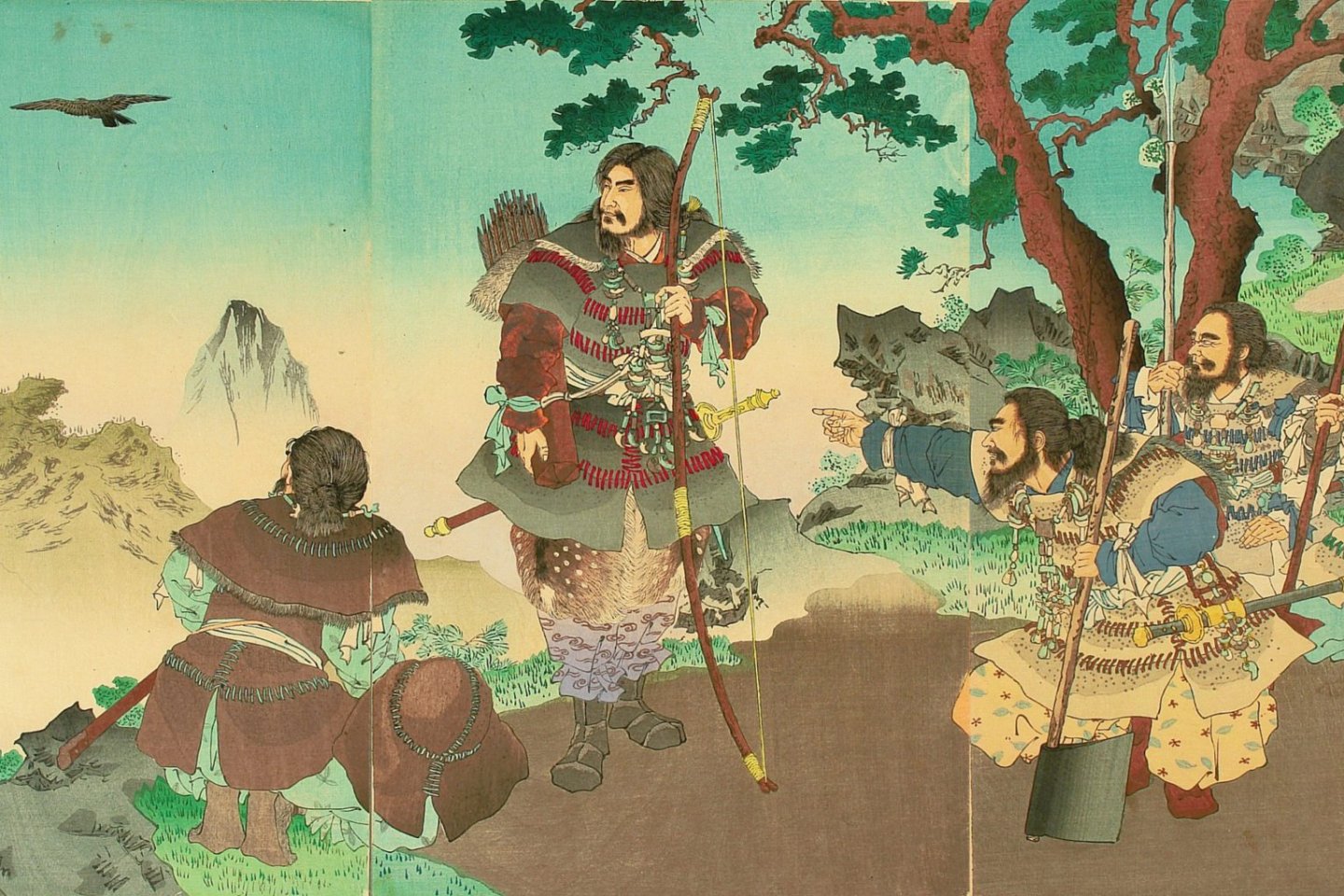 Show Notes for episode 54A of our Podcast – The First Emperor.

Today we are going to talk about Jimmu Tenno 神武天皇, or to the Western world, the Emperor Jimmu.

Now he is going to act as we have said as the first in our chronological telling of the stories of the Emperors which we will tell over the coming months and years as the show progresses.

So who is this Emperor descended from?

Well, he is the great-grandson of Ninigi 瓊瓊杵尊. This being the grandson of the sun goddess Amaterasu, who sent Ninigi down to Earth so that he may rule. But Ninigi’s particular tale is for another day, we will eventually arrive at his story once we finish up our Shinto stories that we are telling chronologically.

Now we know of his heavenly origins, but if you wish to know of his parents, his mother was known as Tamayori-hime 玉依毘売命/玉依姫尊, and she was a dragon of the sea. His father being, Ugayafukiaezu 鵜葺草葺不合命. And Jimmu was one of their several children, the last of four infact. It should be noted as well that Tamayori was also the aunt of Jimmu’s father.

But enough of lineage perhaps, Emperor Jimmu is also kind of not his name, more of a post humous name given to him much later in time. He was born with the name of Kamu-yamato-iware-biko 神倭伊波礼琵古命, which based off one translation I have could be read as Boulder Hamlet Lad of Sacred Yamato.  This name is used in both the Kojiki and Nihongi, documents we have talked of before in that they are very useful as they were written as chronicles of the first Emperors reigns. In the Kojiki also we find other names used for Emperor Jimmu, these being Waka-mi-ke-nu, Toyo-mi-ke-nu and Hikohohodemi

Now I will be bringing together both these sources as one talks of events glossed over by the other, and there is another book I have I will use from 1959.

We know that, according to the records, he was a man of great intelligence and resolute will, and though he was not the first son born to his parents, in fact he weas the fourth and last, he was still chosen as their heir to his father and so at the age of fifteen it was decreed that he would take the throne. Born in 711BC.

During this time he is said to have met and married a woman, from the Province of Hyuga, known as Ahira-tsu-hime 吾平津媛 and together the two of them had two sons, Prince Tagishimimi 手研耳命 and Prince Kisumimi 岐須美美命.

And then we kind of jump at little in time from the age of 15 to 45 when Emperor Jimmu then wished to bring all of Japan under his rule and unite the people, stating that ‘the remote regions do not yet enjoy the blessings of Imperial Rule,’ and also saying that since their heavenly ancestors first came to Earth it had been 1, 792, 470 years. So he guess it was about time everyone needed to be united. He says he had heard from the ‘Ancient of the Sea’ by the name of Shuho tsutsu no oji that there was land to the east and so that is where he wished to make his capital.

And so it is said they travelled east to being this unification, leaving from the island of Kyushu where they had lived until not, to move to the other islands to bring out Emperors Jimmu’s task. This they began in 667BC, his brothers Itsuse, Inai and Mikeirino.

Now they didn’t leave Kyushu right away travelling from Hyuga Province, to the north east of the island where a giant feast was thrown in their honor. The banquet was given by Usatsuhiko and Usatsuhime, Emperor Jimmu decreeing that Usatsuhime would be wed to his attendant minister Ama no tane. (From them it is said the Nakatomi Clan would later come into being).

From their they then moved north, still on the island of Kyushu where they then spent a whole year.

Now finally after this year they set of again, finally landing in the island of Honshu, in the land of Aki (modern day Hiroshima Prefecture).  Here they stayed for seven years inside a palace they erected here. Sadly we do not know the exact location of where this palace was, however, with these first Emperors reigns it may even be that it never existed as these reigns are definitely more mythological than factual.

After all this time, they moved eastwards to the land of Kibi, which now would straddle Hiroshima and Okayama Prefectures. They stopped again, this time for 8 years, building and residing in yet another palace here. (The years they stayed that I have detailed are based on the Kojiki, the Nihongi gives different times. Also the event I am about to now tell you happens in the Nihongi before the travels I have told you thus far.)

After all this time, they sailed onwards passing through what is now the Hoyo Straits, which separates Shikoku from Kyushu and it is here we see a new person joining our tale.

They found him in the sea, fishing alongside a turtle and bestowed upon him the name of Sao-ne-tsu-hiko in the Kojiki and Utsuhiko in the Nihongi. He revealed he was a kami of the earth, one who generates wind and waves by flapping his robes. He agreed to serve and follow Emperor Jimmu and so they pulled him aboard their ship. This kami agreed to also act as their guide.

Sailing onwards they stopped in the area of Shira-kata-no-tsu, somewhere between modern day Osaka Bay and the Ikoma Mountains where they decided they would rest for a while after the sailing they had just undertaken. But here the Emperor, his brother, and his people were attacked by Naga-sune-hiko from a place known as Tomi, which is now modern day Nara. Naga-sune-hiko had marshalled his forces stating ‘the object of the children of the heavenly kami is surely to rob me of my lands.

Now the battling was fierce, and the Emperor brother Itsuse was injured, taking an arrow to the hand (or elbow in the Nihongi), shot from Naga-tsune-hiko. Itsuse angered by this, said they could not continue to fight in the position they were in, for they were fighting with the sun in their eyes. And this was not they was someone descended from the Sun themselves should have to fight, and so finding a way he managed to get around to the back of the attacking forces and from their they managed to destroy them.

Sadly Itsuse then died of his hand wound and was buried on Mount Kama in the city of Wakayama.

With that, after the burial of his brother more sailing ensued after the battle but the seas and the winds were against them, his two brother crying out in alarm at the fact. His first brother Inai cried out he was a descendant of the heavenly kami, asking why they harass him by land and sea? And so he brandished his sword and jumped into the ocean to drowned, transforming into the kami Sabi-mochi.

His other brother Mikeirino then cried that his mother and aunt were sea kami, why do they raise great bellows against them. And so he fled, treading on the waves to go to Tokoyo, the Everworld. (We mentioned this briefly before as a land full of immortals and golden orange orchards. The island where Omoikane gathered cockerels to help get Amaterasu to come out of the Rock Cave.)

Now the Emperor having lost all of his brothers moved onwards to the Kii Peninsula (so we are staying in kind of the same area for now). Here we see a rather strange event where Emperor Jimmu then sees a bear going in and out of the mountain and suddenly from the sight of it he fell down and fainted, his men also all doing the same. The Nihongi here does differ slightly and says the fainting was due to poisonous vapours belched further by the gods. (And I assume that it means the kami still dwelling on earth, as it would seem strange for those in Takamagahara (Heaven) to put Emperor Jimmu in danger.

Now luckily for them they were saved by a man known as Taka-kura-ji who came to the place where they had all fallen, and offering up a broadsword that was sharp enough to cut through anything in one go caused the Emperor and his men to reawaken. The name of the blade was Saji-futsu.

The Emperor startled by this stood up and took the sword in his hand. And swiping it caused all the evil and unruly kami in this area were cut down.

But, where he the sword come from, he wished to know and so asked Taka-kura-ji for his tale.

He told him he had had a dream in which his saw some of the kami of Heaven. He saw Amaterasu and her husband Takamimusuhi together talking to Takemikazuchi (one of the children of the fire God Kagutsuchi we have previously talked about) stating that he needed to go down to earth to help Jimmu. They could sense things were not safe for him at that moment, and as this kami had already made this land pledge submission he should go and remind them of this fact. He said in essence he wouldn’t be going but that he could send down his broadsword which this piece of land would submit to.  And so the kami addressed Taka-kura-ji saying to find this sword in his storehouse when he awoke.

Today is our final Senryu for the time being, and in a rare tun of events we do know who wrote this particular one. Someone known as Chouroku.

Closing the younger brother’s mouth makes him a good boy.