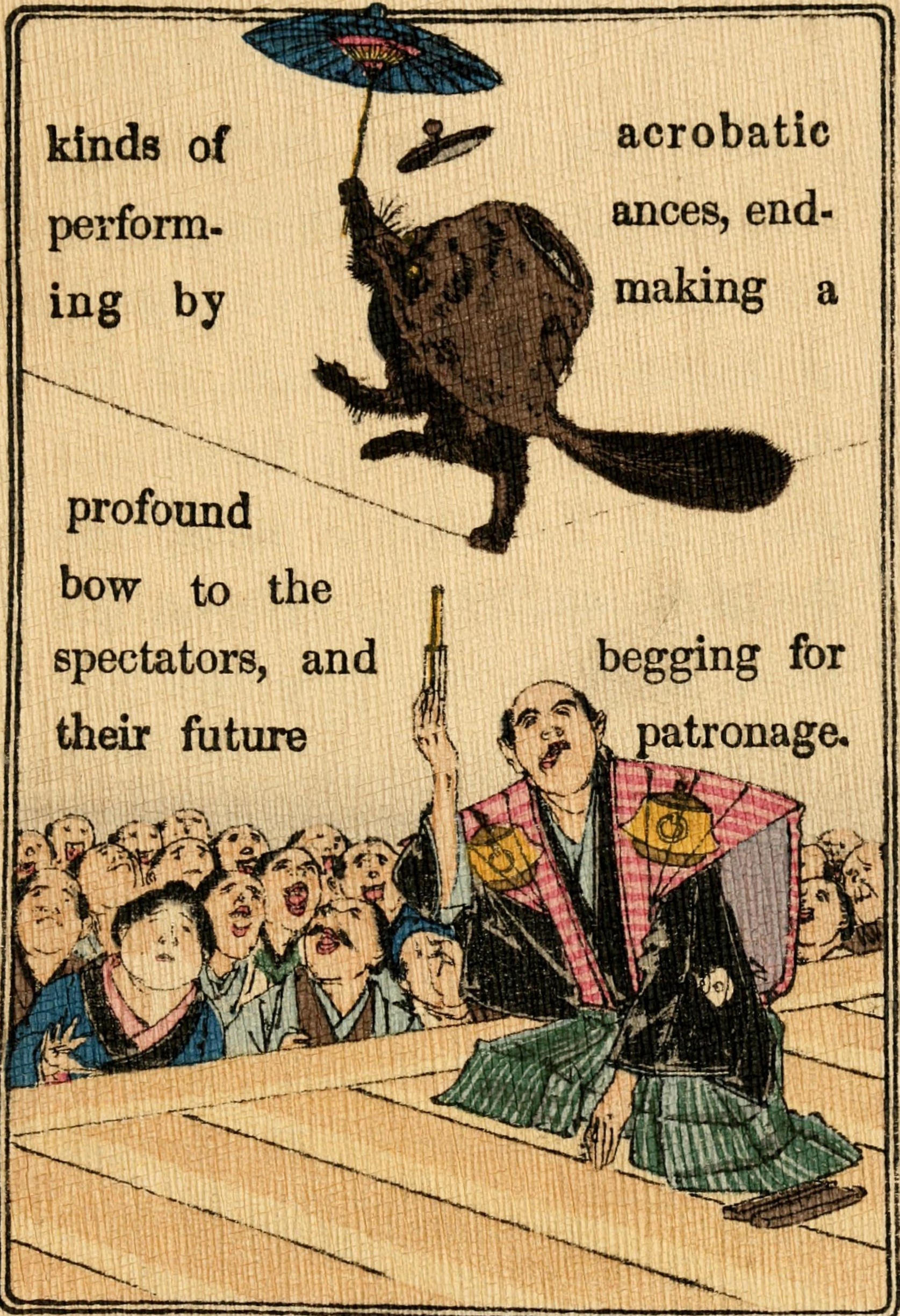 Show Notes for episode 53 of our Podcast – Kettles and Sparrows.

Today we had two folktales from a very old source, The Folk Lore Record dating to 1878. So sit back and enjoy the tales.

A time ago the priest of a Buddhist Temple at Tatebayashi, in the province of Pekin, found an old iron boiler amongst a lot of lumber, one of the kind of tea-kettles formerly used on great occasions.

It looked as if it had been ill-used, it was so old and battered. But the priest was a thrifty man, and a lover of old-fashioned things; so he was looking to see what he could make use of amongst the lumber that his predecessor had left behind him. He cleaned the old kettle, and, filling it with water, set it on the fire to boil. To his great amazement it seemed to move, and the head, tail, and four legs of a badger seemed to grow out of it, before he could say the ever-ready prayer of his sect.

It then jumped from the fire and tried to escape; but the priest calling to the neophyte to come and aid him, they beat the badger down with brooms and caught it, and put it into a box. Now there was a dealer in old metal in the village who was known to the priest, and the neophyte was sent to bring him to the temple, but nothing was to be said about the tricks of the pot.
When the box was opened to show the dealer, it seemed to be the same old rusty, dirty thing it was before the priest cleaned it, so the dealer would not give more than about ten cents for it. The priest, however, after some attempts to obtain more for such a heavy kettle, closed the bargain, glad to be rid of it.

The dealer found it heavier to carry than he at first thought, but he managed to get it home. The same night he was awoke from his sound sleep by noises that seemed to come from the corner where he had placed the tea-kettle, but they ceased when he sat up to watch.

Fancying there might be a thief, he was cautious; and presently, in place of the pot, he saw a great badger dancing about, in a way that astonished him, skipping from place to place and balancing itself in the strangest attitudes until the poor man was quite frightened.

Early the next morning he went to a friend, another old-metal dealer, and
told him about the badger’s tricks. This old man had heard when a child about the story of a tea-kettle that was bewitched, and he thought that perhaps the one bought from the priest might be the same. He advised his friend, therefore, to exhibit the kettle as a curiosity, for, if the badger’s good will and confidence could be gained, it would bring its possessor a fortune. He also advised that no prayers should be said, or religious ceremony observed, near the place where the tea-kettle was, as such would annoy the badger and inter-fere with the exhibition. The dealer took his friend’s advice, and, erecting a temporary building, succeeded in getting the badger to show off his tricks in public.

When the tea-kettle was placed on the stage it would not move till there was a crowded audience; then, assured that every one had paid his entrance fee, it would gradually develop head, limbs, and tail, and go through the funniest performances on a tight-rope, with umbrella, fans, etc., dancing and tumbling, finally disappearing suddenly, and here the old rusty tea-kettle would be seen back on the stage again.

The dealer became a very rich man, but he feared he had incurred the wrath of Nin-rai-oama (Buddhist divinity), and he therefore made presents of money to the temples that the priests might pray for him, and avert the punishment he feared he had incurred; for, by giving up a portion of his wealth, he hoped to enjoy the remainder for many years, and be sure of a happy hereafter free of trouble.

The priest who had sold the tea-kettle was a clever man, and had no difficulty in obtaining enough money to build a fine new temple, the dealer believing he was thus making the road easy for himself in the next world. There was a special place built for the tea-kettle. It was canonized, and named ” Great Enlightened Spirit of Bum-buku ;” and is still to be seen.

In the days of old, there lived in the forest at the back of an old shrine, not far from the pathway, a sparrow called Chiyo-suke. He had been for a long time looking about for a suitable wife for his eldest boy Chiyo-taro, being anxious that he should settle down and become more steady and industrious.

As usual, he had formerly arranged with a neighbour a match between his daughter and Chiyo-taro, but the girl had died, and the boy was now, as his father thought, free. Such was not the case, however, because one day, when Chiyo-taro went to visit the shrine of his tutelary saint, he met the daughter of Suzu-yemon, and was so much charmed by her pretty face and modest ways that he fell in love with her directly, and, boy-like, suddenly decided that he would have her or none for his future wife.

When he went home he took the first opportunity to confide his wish to his mother, and, as she had heard the story of Suzu-yemon, all about his being caught and his tongue cut by the cruel old woman, and also how kind and dutiful his daughter Osuzu always was to her friends, she promised to help him. Chiyo-suke was sorry his son had not made a grander match, but, as there was nothing to be said against the character of Osuzu and her family, he, with a little coaxing, consented.

The next thing to be done was to find some elderly woman, who was intimate with both families and a good match-maker, to act as a go-between in such cases, and who was smart and clever in finding out everybody’s business. Now there is rarely much trouble in finding out such a one, for, if they manage well, they are sure to receive nice presents from all parties, and they generally try. hard to earn them. Dressing herself in her best clothes, and asking that one of Chiyo-suke’s maidservants might attend upon her to make a little more show, the match-maker paid a visit to Osuzu’s family.

The good folk guessed the object of the visit to be an offer of marriage for their daughter, but as in duty bound, according to olden custom, they cleverly avoided appearing to know it, and evaded every attempt to bring round the chat to that subject. After many pipes of tobacco had been whiffed, and tiny cups of tea sipped, they at length admitted that Osuzu was not as yet betrothed, but they were in no hurry, there was plenty of time, and her pretty face and cleverness would get her a rich husband by-and-by.

The match-maker hinted that Chyo-suke’s son would be a very good match. He was rich, handsome, and clever, not; any worse than other young men, and so forth. She pressed her point, and finally obtained the consent of Osuzu’s friends to return to Chiyo-suke and arrange for a formal meeting of the two families. Elated with her success, she commenced in earnest, and the result waa that in a few days the middlemen or witnesses were appointed.

The bridal gifts were chosen by the bridegroom, amongst other things a beautiful girdle, a bundle of white fibre, fish, wine, etc. In return the bride’s family sent him a complete dress of ceremony, wine, etc., and on the day of the wedding her bridal outfit would be sent to her future home. A lucky day was now chosen for Osuzu to leave her old home, to go to her future one. Chiyo-taro’s friends and neighbours met at his house on the evening of the happy day with their paper lanterns, which they lighted to go to meet the bride and her friends.

When the chair in which Osuzu was carried arrived at her new home, she was lifted out of it and carried into the house with a great fuss, for it is not lucky to allow the bride to walk in for the first time lest she should touch with her feet certain places, and that would be a bad omen. She was first taken to the Buddha shelf, the family shrine, and to the Shelf of the Gods and other places, to kneel before them and pray to be admitted into the family, and for prosperity to her new home-she still wearing her beautiful new silk dresses and the veil of floss silk over her head. Then she was led to the best room, where a grand feast was spread out, and seated beside Chiyo-taro.

They drank wine from the same cup, whilst the friends clapped their hands and congratulated them. She was then led to a side room, and her robes were changed for a beautiful bright-coloured crepe dress and a gold brocade girdle. During the feast her robes were changed several times, to exhibit to admiring friends the extent of her wardrobe, and by the time daylight was dawning every one had feasted so heartily that they were nearly all asleep.

This was said to be the grandest wedding known in the forest for many long years. Chiyo-taro was a good, kind, husband, and he and Osuzu were happy and prospered, living to old age.

Today from Heather we have an annonymous Senryu.

In the fair copy there’s a character he doesn’t know ー the father’s face.