E52 The Love of Asagao 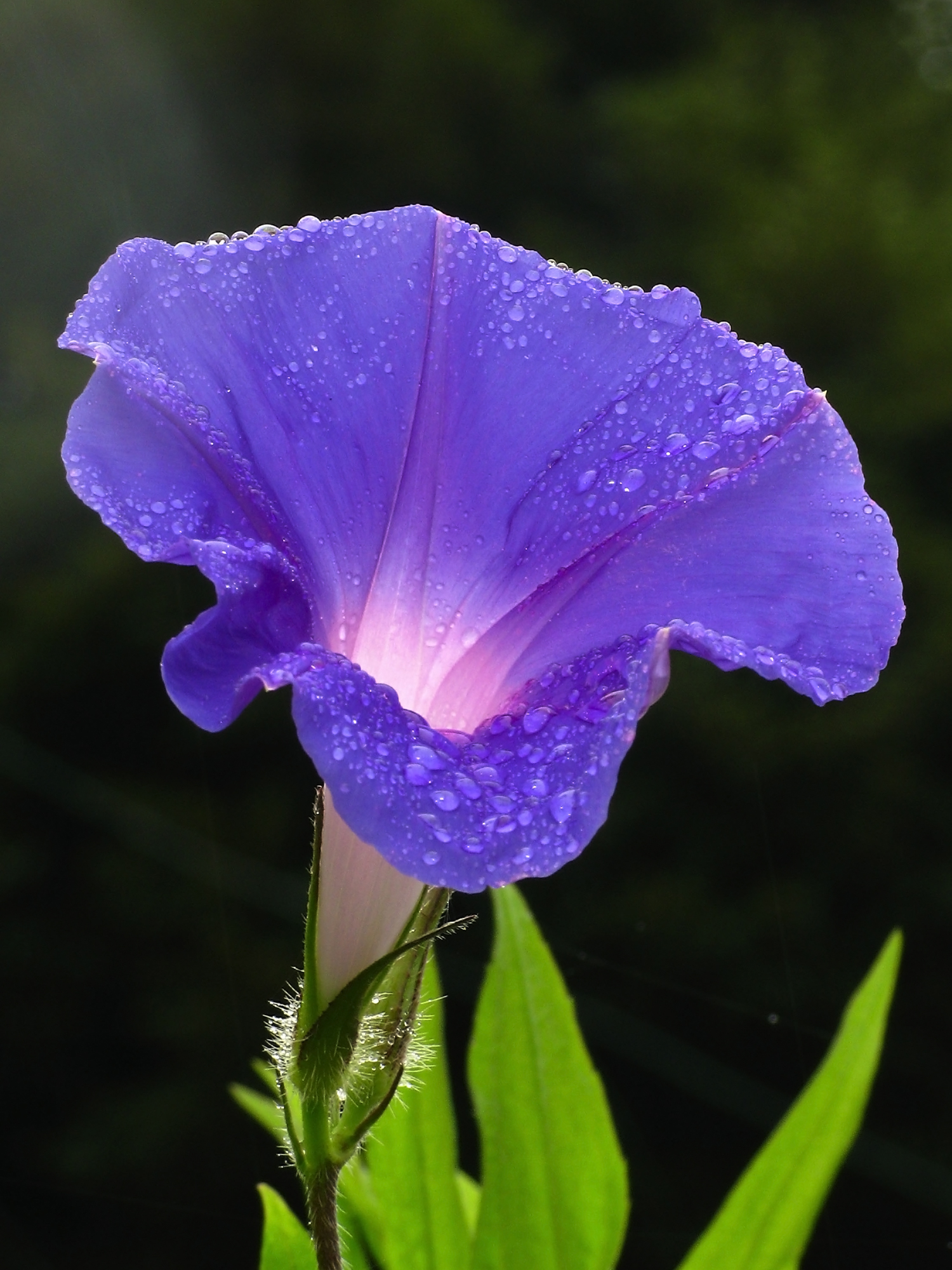 Show Notes for episode 52 of our Podcast – The Love of Asagao.

This story originally came from 1913 and so is available free of copyright and so we can include the story in full for you here today.

“The morning glory
Her leaves and bells has bound
My bucket-handle round.
I would not break the bands
Of those soft hands.
The bucket and the well to her I left:
Lend me some water, for I come bereft.”
From the Japanese. (Trans. by Sir Edwin Arnold.)

Komagawa Miyagi a retainer of one of the daimyōs, came to a suburb of Kyōto. As it happened to be a warm summer evening he hired a boat, and, forgetting all his worries, he watched many bright-robed little ladies catching fireflies. In the air and on the grass these bright insects shone, so that the laughing ladies had many opportunities of catching these living jewels and placing them for a moment in their hair, upon poised finger, or against a silk flower on a kimono.

While Komagawa watched this pretty scene he saw that one of the ladies was in difficulty with her boat. Komagawa at once came to her assistance, and there and then fell desperately in love with her. They lingered together in a cool recess on the river, and no longer troubled about fireflies, for both were eager to express their love.

In order to pledge their vows these two lovers, according to an ancient custom, exchanged fans. On Miyuki’s fan there was a painting of a convolvulus. Komagawa wrote a poem about this lovely flower upon his own fan before presenting it to the woman he loved. So it was that their fans and their vows were exchanged, and the convolvulus, in picture and in verse, became the pledge of their troth.

Eventually the lovers separated, to meet again a few days later at Akasha, where it chanced that their ships touched each other. When they had exchanged many a fair and loving word they returned to their respective homes.

When Miyuki reached her home, radiant with thoughts of her true love, she discovered that her parents had already arranged a marriage for her with some one the poor little woman had never seen.

Miyuki heard this piece of news with an aching heart. She knew that children must obey their parents, and when she was lying down on her futon she did her utmost to comply with her parents’ wish. But the struggle proved useless, for the form of her lover kept on coming back to her, and the river and the gleaming fireflies. So she arose, crept out of the house, and walked towards a certain town, hoping to find Komagawa, only to discover on her arrival that he had departed, no one knew whither.

This bitter disappointment much affected Miyuki, and she wept for many days; Her salt tears flowed so persistently that she soon became quite blind, as helpless a creature as “a bird without feathers or a fish without fins.”

Miyuki, after she had given way to grief for some time, discovered that if she did not wish to starve she must do something to earn a living. She made up her mind to make use of her excellent voice and to sing in streets or in tea-houses. Her voice, combined with her beautiful and pathetic face, won instant recognition. People wept over her plaintive singing without knowing why. She loved to sing the little poem about the convolvulus Komagawa had written on his fan, so the people who heard her called her Asagao (“Convolvulus”).

The blind maiden was led from place to place by her friend Asaka (“Slight Fragrance “), till some one killed her, and Asagao was left alone to tap out her dark journeys without a loving hand to guide her. There was only one thought that consoled Asagao, and that was that she might, in her wanderings, eventually meet her lover.

When a few years had passed by it chanced that Komagawa, accompanied by Iwashiro Takita, was sent on business by his Daimyō. While on their journey they happened to enter a certain tea-house. Iwashiro Takita was sullen and morose, and sat in gloomy silence, not deigning to notice his surroundings. Komagawa, on the other hand, looked about him, and saw on a screen the very poem he had written about the convolvulus, the poem he had so lovingly inscribed for Asagao. While pondering the matter in his mind the master of the tea-house entered the apartment. Komagawa questioned him concerning this little love-poem, and the master of the tea-house told the following story:

“It is a very sad story,” said he. “The poem was sung by a poor blind lady. She ran away from her home because she could not marry the man her parents had chosen for her. She was unable to consent to the union because she already had a lover, and this lover she sought up and down the country, ever singing this little poem about the convolvulus, in the hope that some day she might have the good fortune to meet him. Honourable sir, at this very moment she is in my tea-garden!”

Komagawa could scarcely conceal his joy when he requested that the master of the tea-house would bring in the blind woman.

In another moment Asagao stood before him. He saw in her delicate face an added beauty, the beauty of a hope, of a love kept bright and clear through the long, sorrowful years of waiting.

“Down fell the shower of silver rain and wet the poor Convolvulus,
The sweet dew on the leaves and flowers being taken away by the
jealous sun.”

Komagawa listened intently, longing to speak, longing to reveal his love, yet keeping silent because his ill-bred companion still remained in the room. He watched her dark eyes fixed upon him, but they were without expression, for they could not see. Still the samisen tinkled, and still the voice sounded sweet and low and unspeakably pathetic in the apartment. With an aching heart and without a word of love he dismissed her with the usual fee. She walked out of the room as if conscious of a new, acute sorrow. There was something in her patron’s voice that was extremely tender, something that moved her deeply, and it made her heart ache and yearn without knowing why.

The next day Komagawa gave the master of the tea-house a fan, saying: “Give this fan and money to Asagao. She will understand.” With these words Komagawa and his companion proceeded on their journey.

When Asagao had received the fan she felt it eagerly with her small white fingers. “Who has given me this fan and money?” she inquired. “Oh, tell me what the fan is like. Has it a drawing of a convolvulus?”

The master of the tea-house looked at her gently, “He to whom you sang last night gave you this fan,” said he. “There is a drawing of a convolvulus upon it.”

Asagao gave a cry of joy. “Last night,” she said softly, “I was with my lover again! And now, and now….”

At this very moment a servant from Asagao’s old home arrived, asserting that he had been sent by her parents to bring her back again. But Asagao, true to her old love, determined to fight down all opposition.

Now it happened that the master of this tea-house had once been employed by Asagao’s father. He had committed a great wrong in that capacity, a wrong worthy of death; but Asagao’s father had taken pity upon him. He had dismissed him with money, which had enabled the wrongdoer to set up in business for himself. During this crisis the master of the tea-house thought oven the kindness that had been shown him, and resolved to commit seppuku in order that his old master’s child might receive her sight again by means of this brave man’s liver.

So the master of the tea-house killed himself, and Asagao received her sight. That very night, though there was a fierce tempest raging, she set out in search of her lover, accompanied by a faithful little band of servants. All night the maiden journeyed over rough and rugged roads. She scarcely noticed the heavy rain or her bleeding feet. She was urged on by a joyous love, by the fond hope of finding her lover again.

As she climbed a mountain, now bathed in sunlight, she fancied she heard a voice calling her name. She looked about her and discovered Komagawa. Peace came to her then. All the weariness of long search and almost endless waiting were over for ever, and in a little while the lovers were married. The convolvulus, or morning glory, is a flower that only blooms for a few hours; but Asagao’s love had the beauty of the convolvulus combined with the strength and long life of the pine. In their happy union they had remained true to the pledge of love upon their fans, and out of blindness and much suffering Asagao could hold up her fair head to the dew and sunshine of her lover’s sheltering arms.

Today Heather found an interesting little Proverb for us.

When the teacher turns to the blackboard, he yawns.