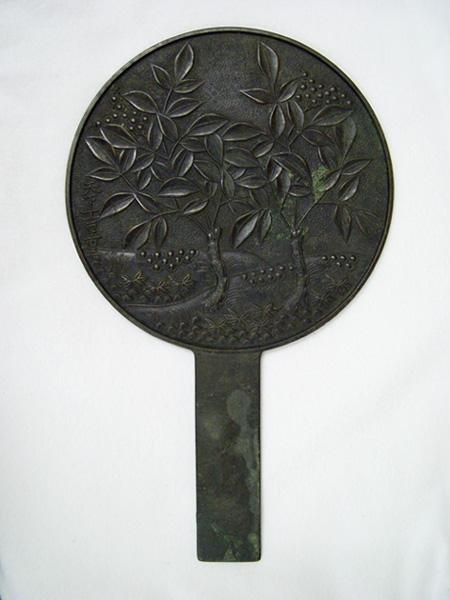 Show Notes for episode 33 of our Podcast – Mirrors.

The first mirror story takes us to a sculptor known as Hidari Jingorō (左 甚五郎). As well as being a sculptor, he was also comedian, actor, stroyteller and painter. Now interestingly enough he might not even have exisited and be completely fictitious. Some studies have suggested he might have been active during the Edo Period but again there is nothing concrete.

As a sculptor we have two quick things of note I would like to mention, interestingly both of them linking back to older episodes. Again, this was not planned, and don’t worry this isn’t at Biwa. I am going to start episodes that have Biwa in it with a disclaimer from now on as we keep coming back to it so often unintentionally. Now the first one is a carving of a sleeping cat, or the nemuri-neko in Japanese. There are several to be found in an around Nikko, but you can also find on the Nikko Toshogu Shrine in Nikko which we mentioned in the Worms of Ten-tei Episode. Now, of course there is another Toshugu Shrine we have talked about, that of Ueno Park, again we can find a carving of two dragons here attributed to him.

Now the second thing that I find interesting is that, according to legend, he was so skilled that others grew insanely jealous of him. And so they decided, in their infinite wisdom to chop his right arm off. But this man was lucky, he was left handed to could carry on with his craft, after all his name Hidari even means left in Japanese.

But anyway, we are here for stories of mirrors today. So let us delve first into the short tale of Hidari Jingorō are well known in Japan.

Mukashi Mukashi, long long ago, Hidari Jingorō was walking through the streets of Edo, going about his every day life. Eventually, his chores finished he began to return to his studio when he came across a strikingly beautiful woman. The woman didn’t notice Hidari, she too was going about her normal day, unaware of the man whom she had caught the eyes of. Hidari noticed that she carried with her a shining mirror. Perhaps the woman, distracted by the people, or perhaps because she had not fastened the mirror tight enough accidently dropped it, and not realising it she carried on her way without it. Hidari, his eyes never having left her, saw this and went to retrieve the mirror before finally returning to his studio. Perhaps he tried to find the woman before he did so, to return her mirror, perhaps not, the tale does not tell.

Struck by her beauty, he decided to make his next piece about her and taking up his tools he began to carve and chisel a statue in the exact likeness of the woman. And upon completion he placed the mirror between the carved robes. Day after day, the mirror reflected the beauty of the woman until one day it began to take within itself the essence of the woman, her body and soul, and all of these strange circumstances caused the statue to come to life much to the happiness of Hidari Jingorō.

Turning to the second story of a mirror today we go to the story of the Priest Matsumura. Now Matsumura was a Shinto Priest who watched over the Shrine of Ogawachi-Myōjin, and he had seen it slowly falling into decline and decay. In an attempt to fix this he decided to journey to Kyoto to talk to the Shogun, hoping he could get some money to restore it to its former glory. Now he and his family stayed in Kyoto in a particular house, a house filled apparently with bad look. But Mastsumura took no notice of this, even though many people had previously throw themselves down the well located on the north-east side of the home, the direction of the Kimon.

Now eventually Kyoto fell on hard times, and a drought plagued the city, every well far and wide went dry, all save the well in Matsumura’s home. So desperate the people were, they came begging to use the well, and no matter how much was drawn, the well never became dry.

Sadly one day a body was found in the well, by the maid of the priest. They checked and ruled out a suicide, but no-one could figure out how his death had occurred. So Matsumura went to inspect the well himself, making a startling discovery. The water seemed to rock from the side to side as he stood there, until it eventually stopped showing him a fair young woman beneath the water who was touching her lips with beni (an old form of Edo lipstick, I did find a news article about it trying to be revived in the modern day). She smiled up through the water to the Priest who soon became overwhelmed by a need to throw himself into the water so that he may hold this enchanting woman before him.

But, he was a holy man, and he fought against the urge until he broke free. Quickly soon after he had a fence built around the well, and banned people from using it ever again.

Now soon after the drought came to an end, and instead a downpour hit Kyoto which lasted for 3 days and 3 nights whilst Kyoto was also subjected to an earthquake. On the night of the 3rd day, a knock came to the Priests door, and prying it open he saw the woman from the well stood before him. He rightfully refused her entry, demanding to know if she was the reason for all the death around the well.

She then told her tale to the Priest, ‘My name is Yayoi, and it was not I, but the Poison Dragon. Never did I wish to lure those people to their deaths, but alas the Poison Dragon bid me to do so. He forced me, all this time against my will, to do this task for him. But now, the Gods have made him leave, and go elsewhere, and now I am free of his service. The well now lies near empty, please if you would, find my body and take care of it, and you shall be rewarded.”

And with that said, her form disappeared in front of the Priest.

Matsumura waited until the following day to begin the search, instructing some well-cleaners to search, where they came across several hair ornaments, but also a very old metal mirror. The Priest had always been a wise man, and  decided to keep the mirror and cleaned it. Hoping to find answers upon it. And sure enough he did.

Several characters were writ upon its back, most now unreadable, but some he could make out. For instance he could see written ‘Third Month, the Third Day,’ or Yayoi as it was pronounced in old Japan. The Priest quickly realised that it was likely that he had been visited by the soul of the mirror the previous night, the woman’s name being the same as one the mirror.

Matusmura took great care of the mirror as Yayoi had instructed, even going so far as to re-silver and polish it before laying it inside a box he had had made specially for it. And from then on he kept them in his home.

One night he rested in the room with the mirror, and on this night Yayoi once more showed herself to him, and this time she regaled him with her tale.

‘Indeed I am the soul of the mirror, once owned by Lady Kamo, until I became an heirloom of the Fujiwara Clan. I was cared for, for a time until the Minamoto and Taira Clan began their fighting when I was then thrown into the well and forgotten. It was then the Poison Dragon found me and made me do his bidding. Until you freed me. If you could, please give me to the Shogun, Lord Yoshimasa, he descends from those who once owned me. If you could do so I believe you will be richly rewarded. But you must leave immediately, a storm is coming that will wash away your home.”

And so Matsumura left, watching his home wash away soon after. Presenting the mirror and the story behind it to the Shogun, he found the man greatly pleased and so he gifted the Priest with not just gifts, but enough money to see that his temple of Ogawachi-Myojin could be restored to its former self.

The song today is known as Sakura Sakura.

Cherry blossoms are one of the biggest iconic symbols of Japan, along with Mount Fuji, The Japanese flag, and one might argue, cats.

Cherry blossoms bloom in the spring, and are seen as a symbol of new life, beauty, and new beginnings. They are also viewed as an illustrational to the shortness of life, youth, as well as beauty. They only bloom for a week or so, and then the blossoms slowly drift way from the tree to reveal the green beneath.

Cherry blossoms also symbolize the end and beginning of the Japanese school year. Graduation time is fast approaching, and students will be leaving to go to the next level of school, so many goodbyes will be said. Cherry blossoms are a symbol of change and evoke strong emotions in many Japanese people – or so I have been told.

We will revisit Cherry Blossoms SEVERAL times in poetry and poetry symobolism, but for today I want to teach you the Sakura Song so if you happen to go to a hanami (or cherry blossom viewing) you can sing it – which considering some people who I’ve seen at hanami and how much they drink, there very well could be singing going on. You enjoy that hanami!

The melody of this  traditional Japanese folk song originates from the Edo period. You’ve probably even heard this song in instrumental form, as it has been used in many songs, and I even found a reference to it’s use in Jon Bon Jovi’s song Tokyo Road. It’s been used in movies and shows as background music for shows that are based in Japan. It uses a pentatonic scale – called the in scale and according to my research, it:s called the Sakura pentatonic scale. This scale is used for the koto and shamisen, traditional Japanese instruments. The koto is similar to a harp, with strings you pluck and the shaminsen is similar to a guitat shape and it’s played with a special paddle.

Cherry blossoms, cherry blossoms,
Across the spring sky,
As far as the eye can see.
Is it mist, or clouds?
Fragrant in the air.
Come now, come now,
Let’s go and see them!

However in 1941 the ministery of education added another verse, which became the first verse. The original lyrics were relegated to the second verse.

Today I will just share the lyrics with you, and I’ll sing the whole song on a future bonus episode.