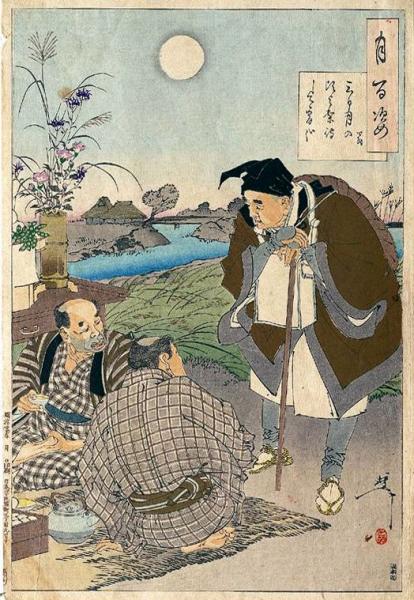 Show Notes for episode 45 of our Podcast – Beginning Basho.

Breaking the silence of an ancient pond, a frog jumped into water – A deep resonance

We’ve encountered Basho so many times during the podcast, that it felt right to do a more thorough research into his life. Like Hokusai, let’s talk a little bit about Basho’s life for this episode and we’ll want to come back and delve further into Basho’s poetry and works as we grow in our own knowledge and studies.

Basho was born in Iga Province, Ueno City during the Edo period – 1644, but he died in 1694. Only 50 years. 50 short years that profoundly influenced Japanese poetry and culture. He has a long list of published works, numbered well into the 20s so I don’t think we’ll sit here and read out the entire list! And for those who may be wondering the old Province of Iga is now within Mie Prefecture.

Basho is known now as Matsuo Basho, but he was born Matsuo Munefusa. He was born either into a samurai family of minor status or perhaps a family who could claim decent from samurai, depending on your source. Basho it seems was the middle child, with  3 older siblings and 3 younger ones. Even though it seems Basho’s family status was of a higher level, the family was not wealthy. Basho became a servant, or page, around the age of 9 in the Todo family and studied alongside the family’s son named Yoshitada. Yoshitada and Basho studied “hokku,”  as haikai was previously known. They even had pen names – Sengin for Yoshitada and Sobo for Basho. Unfortunately Yoshitada, whose health was more delicate, died at the age of 25 in 1666.

It seems that Basho’s service ended – whether by request or by running away – is perhaps up for some debate. However, we do know that he left – perhaps to Kyoto, perhaps to a temple – it seems that the exact records aren’t known.

After a time, Basho traveled to Edo, or as we know it, Tokyo. Now, per my knowledge and what’s been shared with me by the professor, Kyoto, being a very old city is considered more formal and conservative. So Edo must have been new and exciting, with many possiblities. It’s here that Basho met the poet Soin and soon his pen name became Tousei.

It was during this time that Basho began to change his idea of poetry.
I love this quote from the author in the preface of the Penguin book “the special value in poetry of the humble and umpretentious imagery of everyday life..”

At some point, feeling dissatisfied with the trappings of they city, Bashou decided to move to Fukugawa. It’s here that we encounter the fateful banana tree, from episode 22:

This banana plant was given to Basho by his disciples, and it’s from this plant that the final pen name became Basho.

Basho’s house burned down not too many years after, and he stayed with a friend in Yamanashi prefecture and wrote the collection of poems called Minashi Guri, or the Empty Chesnut.

His discplines built another house for him in 1683, but in 1684 he decided to travel instead.  When he travelled he relied entirely on the hospitality of the temples he came across on his journeys and well as the hospitality of his fellow poets.

We’ll cover his journeys another time, but it seems like his travels were based in a sense of trying to find himself, to hone his craft, to get closer to his poetry.

Quoting from the Penguin edition of Journey to the North:

Go to the pine if you want to learn about the pine. Go to the bamboo if you want to learn about the bamboo. And in doing so, you must leave your subjective preoccupation with yourself. Otherwise you impose yourself on the object and do not learn…. However well phrased your poetry may be, if your feeling is not natural – if the object and yourself are separate – then your poetry is not true poetry but merely your subjective counterfeit.

And while we may think of Basho as a haiku master, he himself thought that his true talent was in linking renga verses.
Let’s leave Basho for now, with one final poem. His last, in fact.

Mukai Kyorai as we have mentioned before was a disciple of Basho and it is said that the two of the became very close during their lifetime. So close infact Basho would also visit and stay in Mukai’s country cottage when he visited Kyoto. In fact, it was during one of his stays here that Basho wrote one of his diaries known as the Saga Nikki.