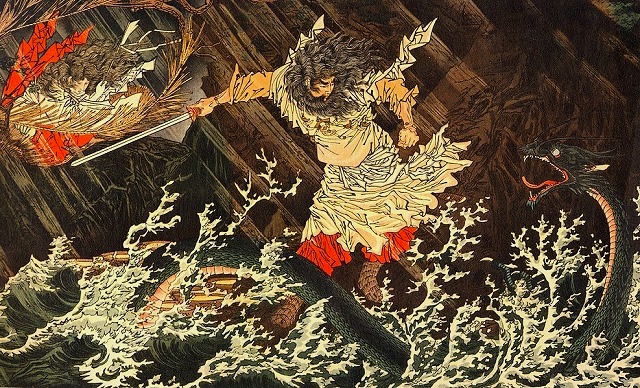 Show Notes for episode 44 of our Podcast – Yamata no Orochi.

So finally Susano-o is leaving Heaven, he has caused offence, he caused the sun goddess to flee for a time causing the land to fall into darkness, and generally he has proven to be not a very nice deity.

And so he has finally been exiled, and he leaves heaven on high making his was to river known as Hi in the province of Izumo.

Now when he arrives here, he begins to hear weeping in the distance, and this piques his interest and so he ventures to find the source of the distress.

His wandering draw him to an old man, his wife as well as their daughter and it looked to Susano-o that the parents were weeping for their daughter.

“Why ever do you mourn?” Susano-o asked after approaching them, and so the old man spoke up in reply.

“My name is Ashinadzuchi, an earth deity, and my wife is called Tenadzuchi. This here is our daughter, Kushinadahime and it is her we weep over. Once we had many daughters, once we had eight. But every years the dragon known as Yamata no Orochi comes forth to devour one. Kushinadahime is out last daughter, and we don’t want to lose her to the dragon.”

Susano-o thought he could save this girl and asked them to hand her over to him, and once they had done so he turned her into a many-toothed comb which he placed into his hair.  And so she was hidden from the dragon.

After he had done so he asked the old couple to brew eight giant vats of sake and have them ready for the appearance of Yamata no Orocho. And so they waited, and eventually the dragon appeared before them.

Now, I guess this dragon was a big a like the hydra from the Greek myths, it wasn’t a dragon with one head, but had an eight-forked head.

Now, I know I like to at times talk about the inconsistencies of these myths at times, but the fact that Susano-o seems to only be hearing about this dragon for the first time from Ashinadzuchi, he appears to somehow instantly know that this monsters had eight separate heads.

And another thing I thought about as we have had a few mentions of dragons now. In the Shinto myths, there is no actually original point for these creatures, we don’t know who made them, or why, again unlike Greek or roman myths where even creatures have origin stories. The only deity we have had that is mentioned to create creatures was Ukemochi from Episode 12 but she is only described as making things with find, or rough and fine hair. She makes nothing with scales. But, that is just my mind wandering when I study these myths. If anyone knows more I would love to know.

But back to the story. Yamata no Orochi has appeared.

He was an eight headed beast, with an eight forked tail, with eyes that shone red. Such was its size, trees grew upon its back and its body crawled over eight hills and valleys at once. The dragon apparently had a great liking for sake and so dipped each head into the large vats and drank its fill until it eventually fell asleep. The sake had distracted it from the girl he had come to kill.

And so as the dragon slept, Susano-o took his ten-span sword known as Orochi no Aramasa (‘Serpent’ ‘Rough’ ‘True) and began to behead the creature. He didn’t stop there, and proceeded to cut the rest of its body into small pieces until he reached its tail where he made an interesting discovery.

His ten span sword became dented whilst attacking the tail, and so curious, he opened the tail up to see what had caused such a thing to happen. And inside, he found another sword.

And this sword became known as Kusanagi, or at times Murakumo. These meaning Grass Mower and Assembled Clouds.

Now Susano-o recognised this as a divine sword and so decided it was not for him to keep, and so he gave it to the deities in Heaven. Don’t ask me how he got it to them, as he had just been exiled from there, but none the less it was handed up to those on high.

And so after this he settled in the place known as Suga in Izumo Province, marrying the woman he had saved.

And here he composed a poem.

And after some time they came together and produced the deity known as Ōkuninushi. To the parents of his wife, he gave the titles of Palace Masters, masters now in the palace of his son Okonamochi.

And so, with the woman saved, a son now born, Susano-o finally proceeded to Yomi to be with his mother.

Now of course, there are several other versions of this tale, even in the Nihongi itself there are a few. Some change the names of the gods, but I think one I want to mention is he finds the mother and father grieving, the mother at the time is pregnant with a girl and they tell Susano-o that every time she gives birth the eight-headed dragon comes to eat their child, and they fear it will soon happen again. She later gives birth and the dragon comes, and just as he is about to eat the child Susano-o jumps in and talks to the creatures. And so Susano-o says to him that he was an awful deity, and that he dare not neglect to give him a feast and so proceeds to pour all of the sake into the creatures eight mouths. And once Yamata no Orochi falls asleep he then chops him into pieces.

Today we see another poem by Basho, one of our most favourite of poets. This one is known as Basho and the Butterfly.

Wake up!  wake up! –I will make thee my comrade, thou sleeping butterfly.

This poem is apparently one to suggest the joyous feeling of springtime.