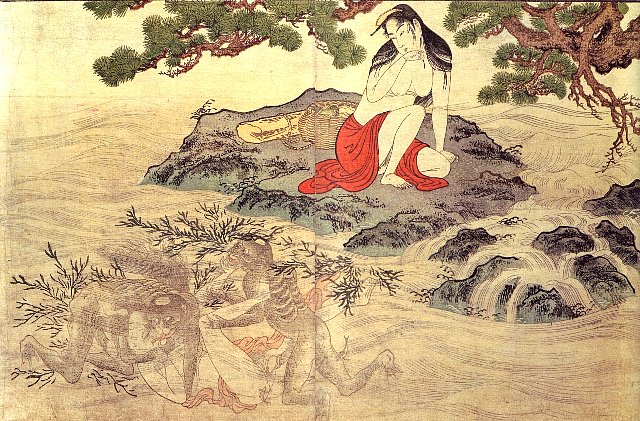 Show Notes for episode 43 of our Podcast – Kappa.

The Kappa (河童) has had various name throughout it long history including Midzuchi, Kawatarō and Kawa-warawa just to name a few.

When it comes to appearance for this creature which is particular to the island of Kyushu, there is the general consensus of a creature with a sort of depression upon its head full of water from which the creatures power stems. But other part of it can be left to interpretation.

Some would tell you the creature is the size of a 12-13 year old, but others would say even smaller, the size of only a 2-3 years old.

Body wise again it can vary widely, their faces can be ape-like, a times with shaggy hair, others say it could have a tiger like face with a snout, and others still would say it looks like an otter.

Their bodies can be like a tortoise, sometimes they can have wings and scaly bodies.

Webbed feet and hands, a greenish body, the ability to rotate their arm and leg joint freely, as well as a fishy odor also round out the many ways in which these creatures can be depicted. But all agree on the depression holding water on their head.

To sleep they must leave water and remove their waterproof skin called amagawa.

And when it comes to things they enjoy, they are mostly known for their love of cucumbers and sumo wrestling, but at times they have been shown to enjoy eggplants and melons.

But when it comes to their run ins with people, there is something else they enjoy, the shirikodama. (mentioned below)

There are other Yokai said to be off shoots or at least types of Kappa. The Kawa Akago (川赤子) and Suiko (水虎) being two examples. The first lives high up in mountain streams and resemble human babies, and the second resembles a pangolin with knees as sharp as tiger claws. This one hails from the Sushui River in China.

Some religions such as Tsugaru, see them as water kami and so they are worshipped. Some agricultural communities see them as suijin, water spirits, and so celebrating them will ensure enough water for the rice fields the coming year.

If you need to appease resident kappa then leaving cucumbers at nearby shrines is a good bet.

Kappa Attack and your best defense

So a kappa has a high chance of attacking you (though some tales show them saving drowning children) and all of these attacks will take place in water or at the water’s edge.

So if you want to avoid this, one superstition is don’t go swimming after eating cucumbers, they’ll smell it and it will draw them to you.

But what is the shirkodama?

Apparently it is a type of life-force, which lives in your colon.

And due to its location, well let’s just say, if the Kappa wants to take it, there is only one place they can go through to try and steal it. So mind your butt while your swimming.

Some others say they don’t always go for the shirikodama and just want your liver, but they will steal go the same way of retrieving it.

If they are not in the mood for your life-force, still please avoid them in the water, they might just drown you because they can.

And if you run into them on land, the prepare to fight them.

Unless you want to repel them away from you. We have a wood block print from 1881 showing just how you can do that by Tsukioka Yoshitaka, and that is to fart in the kappas general direction to get them to go away.

But lets assume you don’t do that and you have to fight them. What’s the best way to do it?

Well first of all they are respectful  in a fight, bow to them before fighting, and the creature will do the same. This will cause the fluid to fall out of its head, taking away its power meaning you can fight and win against them.

However winning is not good, if you do so you will waste away and die. Certain parts of japan say kappa claim two people a year through fights.

So perhaps it is best to repel them with the aforementioned method?

Our earliest reference comes from the Nihonshoki, in 379 involving a midzuchi.

A strong man declares that he has grown tired of the kappa killing people, and so approaching the river he throws in some calabashes, saying if he can sink them he will leave the creature alone, if he cant then he will kill the kappa.

Another tale relates to Tokyo.

There is a bridge in Tokyo called Kappa Bridge, legends says the very first Kappa Bridge to be built was built by a rain coat merchant who used Kappa as laborer’s.

Our next tale comes from a publication which brought together many folktales from the area of Tono.

There was a pond called Gorobei on the Sawahi River. A person once lived close to the rivers banks and he would often go to collect water from there. One day he wandered off and a kappa came forth trying to drag the persons horse into the water and take it for themselves by tying its reigns around its waist. But the horse was too strong and dragged the dangerous kappa into its stable. The kappa panicked, and tried desperately to find a place to hide. But the only place was under the horses feed bucket. Eventually when the person came to feed the horse he picked up the bucket to find the kappa there. The creature immediately apologized for its bad behavior and said it would stop being a thief, it even wrote a letter of apology which is still kept to this day by the owner of the house.

I did come across a sctory of remarkable similarity to the one above which goes as follows.

In times of old a Kappa once lived in the river of Kawachi, he had the habit of taking a killing numerous villagers and their livestock. One day he tried to steal a horse, but the horse was too strong, dragging the creature into a nearby field and so the villagers came together to tie up the creature.  Most cried for the creature to be killed, for all the death it had caused them, but the owner of the horse had a different idea. He wanted the creature to promise to stop his evil acts and so a document was drawn up. But the kappa, though it could speak, said he could not write, and so he signed the document by dipping its hand into some ink and pressing it down onto the page. And from that day the kappa never killed again.

This document was kept at the temples of Kawako-no-miya built on the banks of the river kawachi.

Another tale we came across goes as follows.

A woman once went to use her outhouse, but was scared away after she felt a hairy hand stroke her buttocks. And so she fled telling the local doctor who said he would deal with the problem. He goes to the outhouse and waits for that hairy hand before cutting it off and taking it to his office.

The next day, a kappa comes asking for his hand back, he says if he doesn’t apply medicine soon he will be unable to reattach it. The doctor allows this on the condition that the kappa signs a waver saying he will teach him how to fix bones.

A popular novel by Akutagawa Ryunosuke was written about Kappa in 1927 and went as follows.

A psychiatric patient, called “Number 23”, tells the story of a time he visited the land of the kappa. He had lost his way in the mountains of Hotakadake and was surrounded by a group of the strange creatures, who then showed him around their home. 23 relates how he met with kappa of many occupations. One of them, Geeru, told him that unemployed laborers are gassed and then eaten by the other kappa. He met another kappa called Tokku, a skeptical poet who had committed suicide and appeared to 23 as a ghost by means of necromancy. Tokku, while concerned about being famous after his death, admires writers and philosophers who have killed themselves. On his return to the real world, 23 muses that the kappa were clean and superior to human society and becomes a misanthrope.

The Kappa zushi rolls are named after these creatures.

In the modern day now they have lost much of their sinisterness and act as mascot for tourism and even in TV adverts to sell things. One such mascot is called Kapal and he is the kappa mascot for Shiki City.

They have changed a lot over the years.

Hakushu Kitahara was a tanka poet. He was born into a sake brewing family in Fukuoka prefecture in 1885. He went to Waseda University to study English literature but didn’t graduate.

He wrote for several literary magazines, but today we are going to focus on his work from the children’s literary magazine Akai Tori. This magazine was published from 1918-1931, and eventually stopped completely in 1936. This magazine’s goal was to create, collect, and elevate children’s literature and songs. They asked several poets of the day to help with their goals. Hakushu Kitahara was one of the poets asked to contribute.

Today, the lyrics of the song is from him. Now, in my research I didn’t see a conclusive link from this song to the literary magazine, but based on the title I feel 90% confident that this song comes from Akai Tori. The song is called Akai tori.

The lyrics are just cute, and silly and would have made me laugh as a child. Of COURSE eating a blue fruit doesn’t turn you blue! Unless of you went to visit Willy Wonka perhaps. But the cheerful and repetitive verse is easy for children to learn, and also beginning Japanese students too.

We’ll come back to more children’s songs, called doyo again, as there are more Japanese poets who wrote for the Akai Tori, and someday we hope to do an episode on this magazine too!