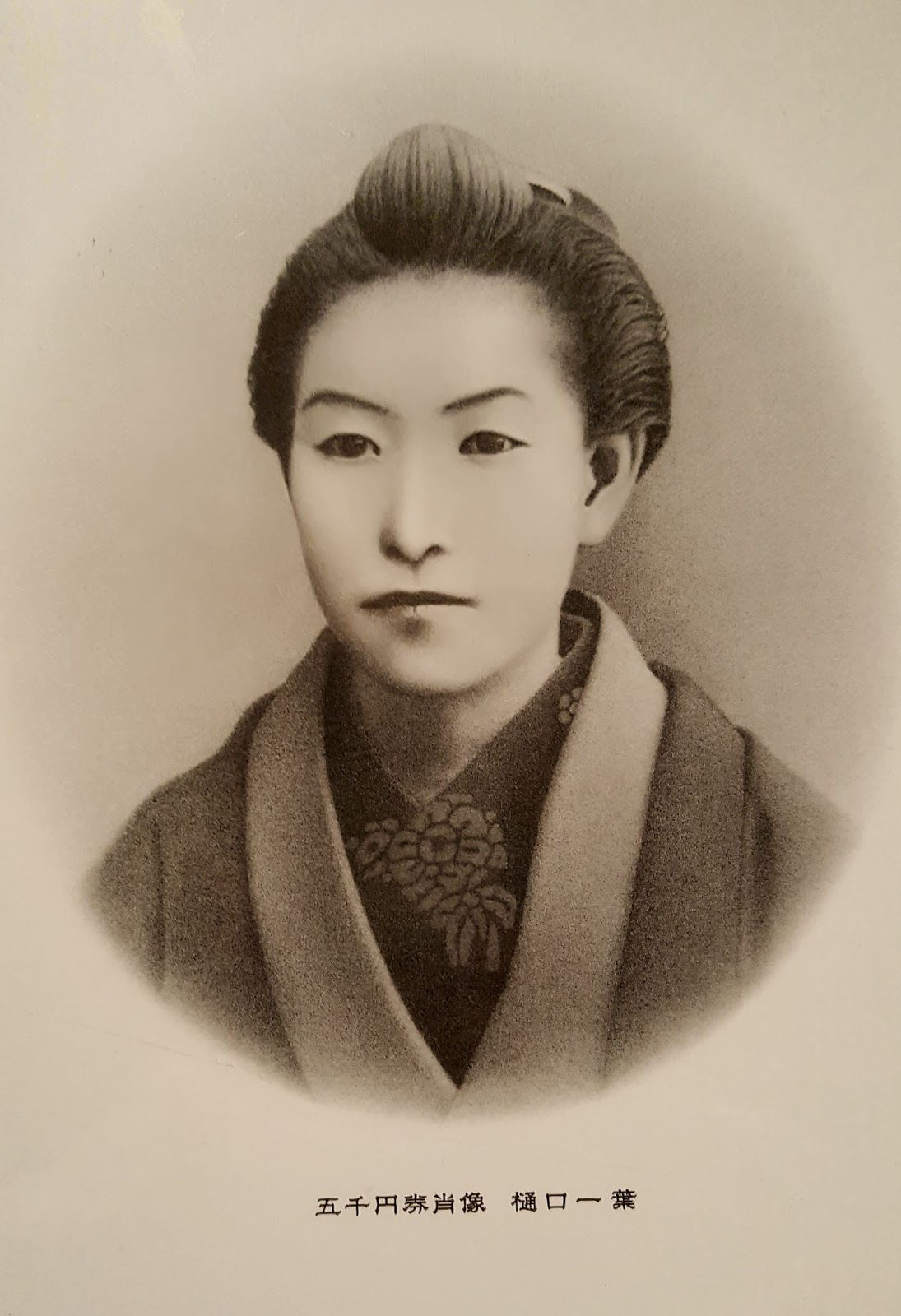 Show Notes for episode 72 of our Podcast – Higuchi Ichiyo.

Today we finally delve into the life of Higuchi Ichiyo, the woman you can see on the 5000円 note.

Ichiyo was born on May 2, 1872. Her name at birth was Natsu, although she also called herself Natsuko. We’ll call her Natsuko for now.

She was from a poor family but her father was a low ranking samurai.

She was educated for the required 6 years for women. At this time, women were only required to get a very basic education because they “only needed enough information to become good wives and mothers.”

It was said that Natsuko was highly intelligent, and her father wanted her to continue her education (and so did Natsuko).  He enrolled her in a waka poetry school for girls. This was unusual at the time period, again because what was the point of educating women. (Please be aware I may be heavily rolling my eyes as I write this). However, Natsuko’s father was very proud of his daughter and in fact I read that he even named many business ventures after her.

However this time would not last. Natsuko’s father and brother died from tuberculosis when she was 16 years old. The family was put into poverty as many business ventures had failed. Natsuko’s fiancé also broke their engagement- whether this was his choice or his family’s choice is not quite clear.

Natsuko was placed in the position of being the head of the family. Again, at this time period women were not considered the equal of men so this was highly unusual. But as there was no male family members there was no choice. Why the mother wasn’t the head I am not sure, but it could be that Natsuko’s intelligence and education level was much higher than her mothers. That’s my conjecture.

The family brought in sewing and mending and washing – jobs were extremely limited at this time for women. You had the option of becoming a prostitute or becoming a mistress. If your education level was high enough you may become a teacher. Unlucky for Natsuko, she wasn’t educated in her school long enough to become a teacher there. So, washing and sewing it was. This didn’t bring in enough income, so the family moved often.

Natsuko happened to meet with a friend around this time; this friend was making a living from her novels.

Here Natsuko decided she too would try to make money as a writer. She embarked on writing but it took her well over a year to write something she would even want published.

It’s here that she sought out the help of Nakarai Tosu, and she hoped he would be able to assist her with her writing.

She chose her pen name of Ichiyo. And it’s from this point I will switch to her pen name, and the name she is known for.

Her writings were based on what she was most familiar with – the lives of women. She observed the women of the Yoshiwara district. She also observed about the children who roamed about, the orphans and the children of the prostitutes. The people who were closer to poverty more often than the well to do of the time.

This is when I interrupt myself and my story. So for this podcast I am relying on a few main info sources.

Of course, Wikipedia I always the default one. However I am using both the English and Japanese one. I am also referencing a journal Article from circa 1950, and another amazing article that I highly recommend you go and read after this because honestly it’s what I wish I was able to write. I will include all my references in the show notes.

The reason I am telling you this? Because I have a little seeming conflict between some sources.

For example, the relationship between Ichiyo and Nakarai Tosu.

One source says that she fell in love with him, but he didn’t return her affection and instead tried to treat her as a sister. And that rumors of their relationship (because of course at this time men and women working together were of course “up to no good.) were circulating across friend groups, as well as reaching the teacher of the literature school, where she assisted and received salary. So rather than cause miscommunication, Ichiyo broke off the relationship. And that her subsequent works were heavily influenced by her one sided, unreturned affections.

Now, another source I have says that he was circulating those rumors and she broke off the relationship because of that.

(Regardless, it seems to be a consensus that he was a cad. Very talented but got around.)

Anyway, we now have an adrift Ichiyo. However, she was able to find help through her friend Miyake Kaho. This friend helped her publish her works as well as eventually help her to publish her works in the literary monthly Bungakki.

Her writing caught the attention of many young writers and she began to be sought after for admiration and advice.

But her writing wasn’t bringing in enough money to support her family. At this time, they ended up moving close to the red light district of Yoshiwara. Here is where her family opened up a small shop selling cheap candy and odds and ends. The shop was popular.

However, the family’s shop wasn’t doing well – there was also competition across from their own shop. The shop was closed and the family had to move again. Ichiyo and her family struggled to make ends meet.

It’s around this time though that she wrote one of her most famous works – Takekurabe.

Ichiyo only wrote for around 4 years, but her works are considered to be a treasured part of work from the Meiji era. She wrote over 20 short stories and somewhere around 4,000 poems. Ichiyo also kept a diary, and I am on the hunt to read it. It’s said that her diary is considered to be as impressive or even more so than her writing.

Here is where we will stop for today – the next time we visit Ichiyo, we will read one of her short stories and talk about the time in her life when she wrote it, as well as hopefully be able to read some passages from the book.

To finish off we have a poem by Ichiyo, one occuring during the unfolding of spring.