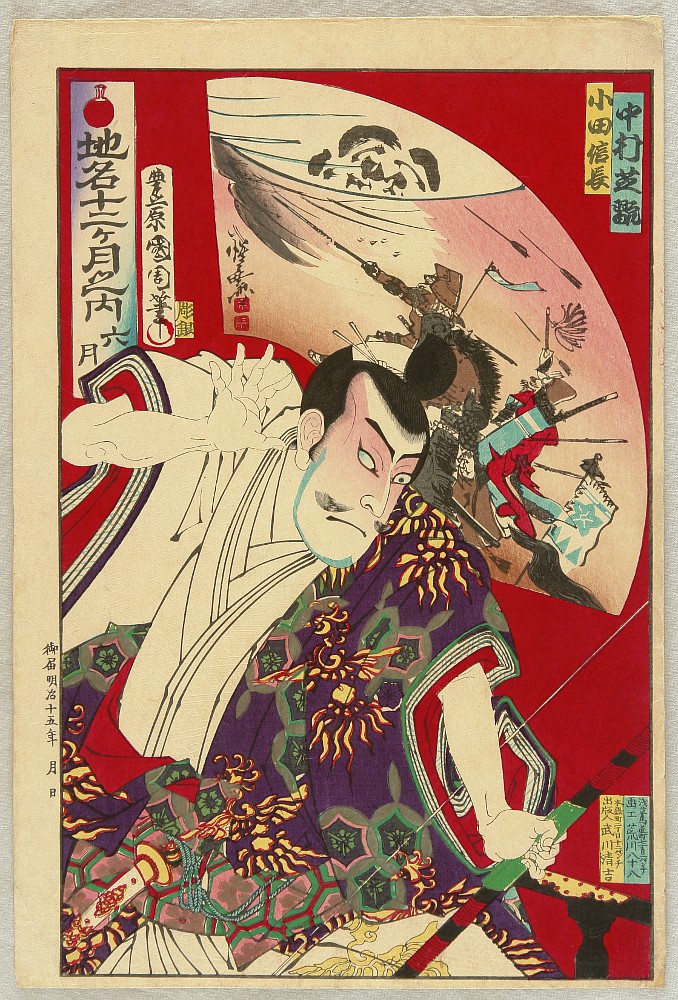 Show Notes for episode 60C of our Podcast – Meeting Nobunaga

We left off with them all entering finally into Kyoto for their fated meeting with Oda Nobunaga. But I failed to mention that as they neared Kyoto their small procession had grown and grown so when they finally entered into the city they have blossomed into a cohort of several hundred people.

But today was not a normal day in Kyoto, not only has Yasuke and the others come to the city, but so had many others from the surrounding region. Country people not accustomed to city life, and especially not accustomed to seeing Europeans, Chinese and Africans. They were all here for umazoroe, a horse event organized by Nobunaga.

Now having so many people so unaccustomed to foreigners took all those visiting Kyoto by surprise. In a way, Yasuke created awe in the people. In Japan there was no negative imagery associated with such a skin colour, in fact, certain images of Buddha portrayed him with dark skin.

In fact, there are several types of artwork depicting dark skinned people from Japan at the time, with the Portuguese merchant Jorge Alvarez noting the Japanese would ‘travel fifteen leagues to see black men and would entertain them for three or four days.’ These people were indeed a rare occurrence in Japan, but one that held respect here.

But all of this respect, caught Allesandro off guard. He would have prepared some form of crowd control, even hoping to use Yasuke to bring in more people in wonderment. But, Yasuke’s presence make all his crowd controlling plans impossible. Much like a battle plan which never survives the start of the fighting, such was his plan equally scuppered as the few hundreds that had been around them was doubling with every few blocks they walked.

A fever took the crowd, a need to see Yasuke, evolving into a practical riot in the very streets of Kyoto.

Now, unfortunately, Allesandro had left the horses before entering into Kyoto as he thought walking as a procession would be more dramatic.

Unfortunately, this now meant Yasuke was running as best as he could away from the crowds as they followed him, desperate to see him, or even get a hold of him. In fact, the whole procession by now had all been separated by the crowd. No-one was in charge now, Yasuke, Allesandro following Takayama Ukon’s soldiers as they pressed through the still growing crowd. Trying as best they could to reach their church in the centre of Kyoto.

They reached a small shrine, Yasuke bulldozing through one of the weak fences at the back to escaped the crowds which continued to follow him. He was very much the centre of attention. A perhaps Allesandro was grateful for that.

After all the running, and I suppose fleeing, the church came into view. Dedicated to Our Lady of the Assumption, Mary, it was now four year old and built in the Japanese style to make potential converts more comfortable with the change of faith. The people within the church saw Yasuke and his small group approaching and as they squeezed in through a side entrance, all doors were barred shut to finally allow Yasuke and the others to rest.

The crowds outside surrounded the church, shutters were quickly closed as rock began to pelt against the church and into the enclosure. People scrambled to barricade the other entrances to the church. The outer walls even began to buckle and splinter under the weight of people, crowds outside chanting to be let in and for Yasuke to be let out.

Who knows what would have happened, Yasuke had his weapons, but the Jesuit’s were forbidden to use them. If the crowds had gotten in, it may not have ended well for any of them. But, as quickly as the crowds had been trying to break in, now they were fleeing. Cavalry and foot soldiers were now marching slowly down the street. Warriors of Oda Nobunaga.

The soldiers arrived, Father Organtino addressing one of the warriors asking how they may serve.

The reply was simple, Oda Nobunaga would see him. And much to their elation they replied saying, yes of course Allesandro has been granted an audience.

But they were cut short. It wasn’t Allesandro who would be seeing Nobunaga today.

He wanted Yasuke, to meet the man who had disturbed the peace of Kyoto this day.

Nobunaga was only five minutes away. Headquartered at Honno-ji Temple. Yasuke was re-dressed into suitable attire, and with Father Organtino, who was a longtime acquaintance of Nobunaga they headed to their meeting. And what was more, Yasuke had to leave his weapons at the church. He was unarmed, no doubt for the first time in a long time.

Yasuke bowed, was asked to shuffle closer to Nobunaga, and after Organtino stated Yasuke could speak Japanese Nobunaga tested this out at once, asking for his name and if he was comfortable.

Luckily, Yasuke has learnt his Japanese in the form of the more polite courtly form, and so Nobunaga found his reply acceptable and the correct level of politeness.

Now Nobunaga, asked Yasuke to stand so that he may rub at his skin. He did after all, doubt the color to be real. Rubbing it obviously did nothing and so a brush and water was called for. Nobunaga even used them himself, having Yasuke take his shirt off to brush all over his body. Finally, amazed and satisfied he truly did have dark skin, he nodded called for food and drink. Yasuke was to be the guest of honour here.

Nobunaga called for his three sons Nobutada, Nobukatsu and Nobutaka to come to see this man, so they may learn and see of the people that lived outside of Japan. A feast began as Nobunaga then began to question Yasuke on various topics.

Now some of Yasuke’s answers here are interesting. And kind of hail back to the first episode when we introduced Yasuke. He talked of his homeland, farther away then even India, pointing it out on a globe Nobunaga had been gifted by the Jesuits. But his home, when he talked of it, he apparently talked of how he had been taken form his homeland before the coming of age ceremony for boys. When they would be given their facial scaring. Which as we talked about, then would mean he came from the Dinka Peoples. Reading back on my notes for that episode, I am unsure why I wrote that they drew on these tattoos. It was in fact scarification. Apologies for that, but it is interesting here to find more evidence, concrete evidence perhaps, on where Yasuke did actually come from.

Festivities grew less formal, Yasuke dancing a little with other warriors, and even after one woman inquired how strong he was, Nobunaga demanded he try to pick her up with only one arm. To show his strength, with one arm he instead picked up two women. In fact, a member of the gathering Ota Gyuichi later recorded Yasuke’s ‘formidable strength surpassed that of ten men.’

Everything drew to a close, and so Nobunaga ended by gifting Yasuke ten strings of copper coins, weighing over 80 pounds. This would have been a small fortune back during this time.

Days later Allesandro had his own meeting with Nobunaga, without Yasuke. Many gifts were given to Nobunaga and the final gifts that was offered was Yasuke and Nobunaga agreed.

Yasuke was to become a novelty and weapon bearer for his immediate entourage.

But there was more to come. Yasuke still would be moving up in the world. But we are not there yet.

For the longest of time we always talked of Heather singing for us the Sakura Song, and so here it is for you all. First talked of all the way back in Episode 33 (check out those show notes for the little history behind the song).