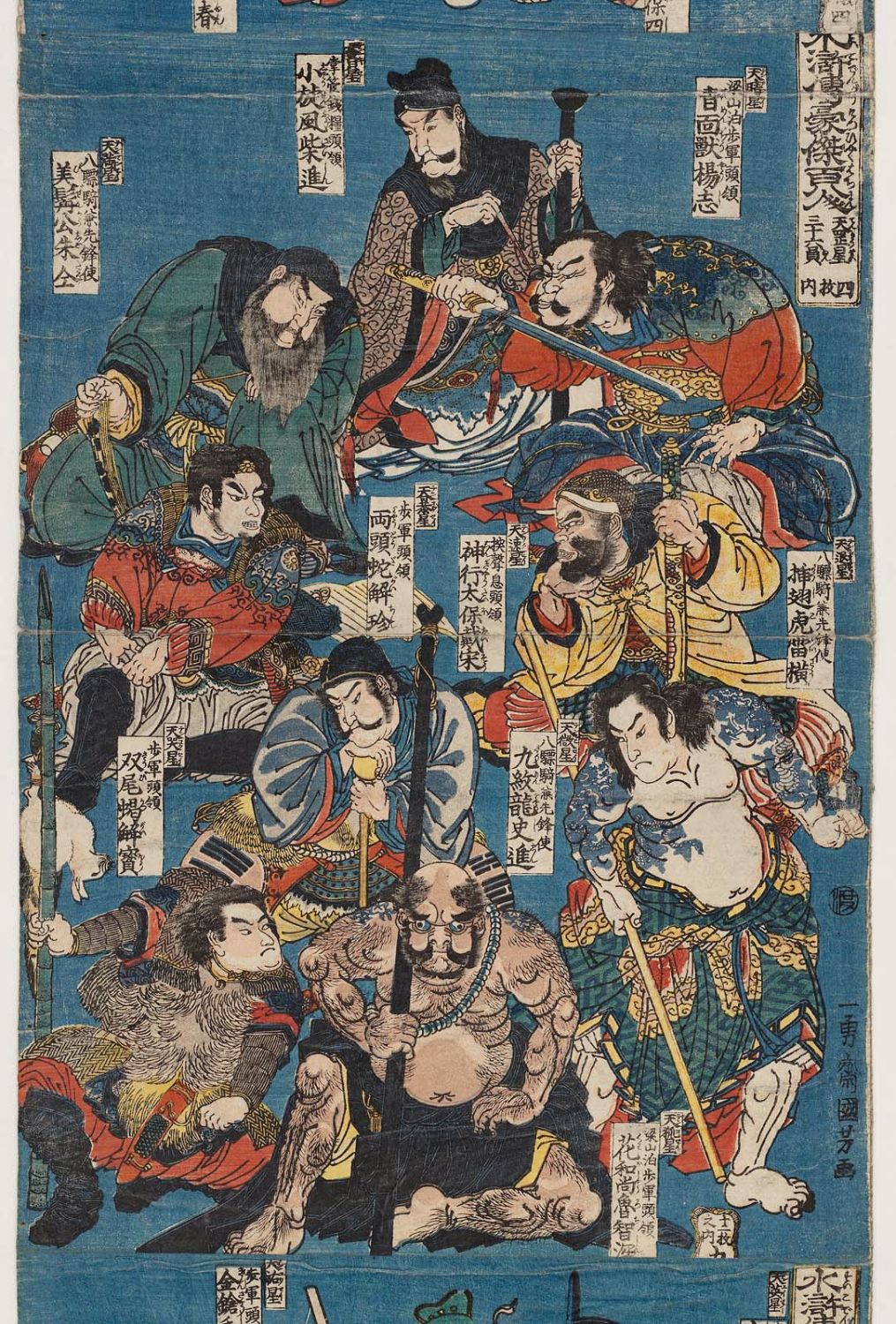 Show Notes for episode 66C of our Podcast – Tattooing – The Suikoden.

So lets us bring to a close our episodes on the history of tattoos.

We have mentioned throughout the popularity of the heroes from the Suikoden so I feel it makes sense to bring it all to an end with some of people who are portrayed in tattoos.

Bokukō, one of his more famous depictions involves him in battle with his friends whilst they fight against Roshungi. He was a wealthy foreigner in the tale and they try to force him to join their clan. After a series of events and Roshungi refusing to join they fight.

Chōjun was a man who at the start of his tale would rob passengers of their coin, but he would eventually find himself as the owner of a fish market. It is said he later joins a clan known as Ryosanpaku after fighting Riki, one of its members. Defeating him after the two of them fall into water it is said this Chōjun’s tattoos gave him incredible aquatic skill. With the abllity to cover great distances whilst in water, as well as the ability to submerge for seven days and nights without any difficulty what so ever.

That tattoos which cover his body are a mixture of pine branches, sakura, vine leaves, a snake as well as flames. I am not sure how such tattoos equate to great abilities in water, so I hope someone can enlighten me.

Now in the tale Chōjun is unfortunately killed, but that is when his brother Chō-ō comes into play. After Chōjun is killed he immediately possesses his brother body to enact his revenge. Possessing him immediately after his death allows him to return to the place of his death quickly where his murderer Hotentei still resided. The possessed Chō-ō then fights and kills his brothers murderer.

This particular event in the tale is what can be seen portrayed in art, and therefore gives us a good depiction of the tattoos he had. Upon his left arm were pine branches, maple leave and a hawk. The hawk itself chasing a monkey which is tattooed on his stomach. In the artwork too is seen a koi carp going up stream to symbolise the brothers pursuing their enemeies even after death. And this can also be included in tattoos to signify this character.

Chōsei and his wife Boyasha are interesting. Inn owners who would poison their customers, stealing their items and cutting them up to sell their meat at market; they don”t sound like the best of people. But one day they poison a man known as Rochishin. However, after realising he is a man of importance they give him an antidote and actually become good friends with him. Soon after, after another man recounts a similar experience at their inn, they are invited to join the clan Rochishin is a part of, their inn even becoming the base of operations for the clan.

Depicted in artwork at the top of mountains searching for his next victims we can see his body tattoo being that of a monkey. The monkey itself being Sun Wukong, the Monkey King. The monkey is seen wearing a kimono and is calling on all his troops to assists him to defeat all the wrongdoers of the world.

Moving on to Ensei a man for who it is said that their is nothing he cannot do, and their was nothing beying his skill. Hired as an apprentice of Roshungi, who was a tattoo artist. Roshungi takes it upon himself to tattoo the boys body with degisn of peonies and young dogs.

Genshōgo was a man who during the working hours was a fisherman, and in his down time was a salt thief. One of his major exploits was stealing from the Emperor during his birthday party. The most well portrayed event of his life however was his fight against General Ko, a man who tried to disarm his clan.

Shown in this art piece with his back exposed, we see a designs of a leopard amongst flames. In the background of the underwater artpiece there is also portrayed rocks and two koi swimming together; this two elements are also combined in tattoos symbolising this character.

This man was a captain, and owner of two ships with the strange ability to remain underwater for long period of time. Sporting tattoos of the Gods of Wind and Thunder Fujin and Raijin he is also seen with a creature reminiscent of a boar tattooed upon his body.

Rochishin was a failed monk, who was later expelled from his temple and even the entire mountain it sat upon Rochishin would turn towards crime and become a thief, forming a gang that would later join the Ryosanpaku bandits. Artwork shows him splitting the trunk of apine tree with his staff his body is covered in sakura.

A medicine merchant who is shown in artwork fighting against Bokushun, a man who would later become his best friend. The artwork gives a clear depiction of his entire back tattoo with a design of a dragon emerging from water, a landscape of houses shown in the background.

This is the man who I believe we mentioned in our first tattoo episode. He was the who had the nine dragon tattoos over his body. To have a tattoo of this man on you would be to pay him great tribute, but it is said that should one actually have the entire body suit of nine dragon placed upon themselves then they would infact become Shishin himself. As if he were to be reborn.

Shuki was an inn owner whose job it was to note rich travellers so his clan could later rob them, his method of information delivery consisted of shooting an arrow with a note to his clans base. We often see him portrayed in art with his bow, and the tattoos you would see on his body are that of a Nekomata (a fire spewing cat phantom) as well as the Kirin (the strange creature perhaps inspired by giraffes that we talked of in the second tattoo episode).

To have a tattoo of this man, you are likely to have him portrayed as he goes to crush his enemy with a giant temple bell he is holding aloft above his head, but if you wish to take a step away from having such an event shown on your body, then the tattoos he is said to have is that of a dragon mixed in with marine animals.

Priest Nōin (能因) also known as Tachibana no Nagayasu (橘永愷) before entering into religion and changing his name, lived from 988 to around 1051AD.

He entered into religion after graduating from the Imperial University aged 25, where he began religion as apoet and ascetic finally settling in Settsu in Kosobe. It is said he visited lots of places with poetic connections and is the author of a famous treatise relating to this, the Nōin Utamakura, from the mid Heian Period.

65 of his poems can be found in official waka anthologies and he is known to also have a private collection of poetry.

He is one of 36 Poetic Geniuses of the Late Classical Period, and a poem of his (No.69) can be found in the Ogura Hyakunin Isshu.