E60B The Road to Kyoto 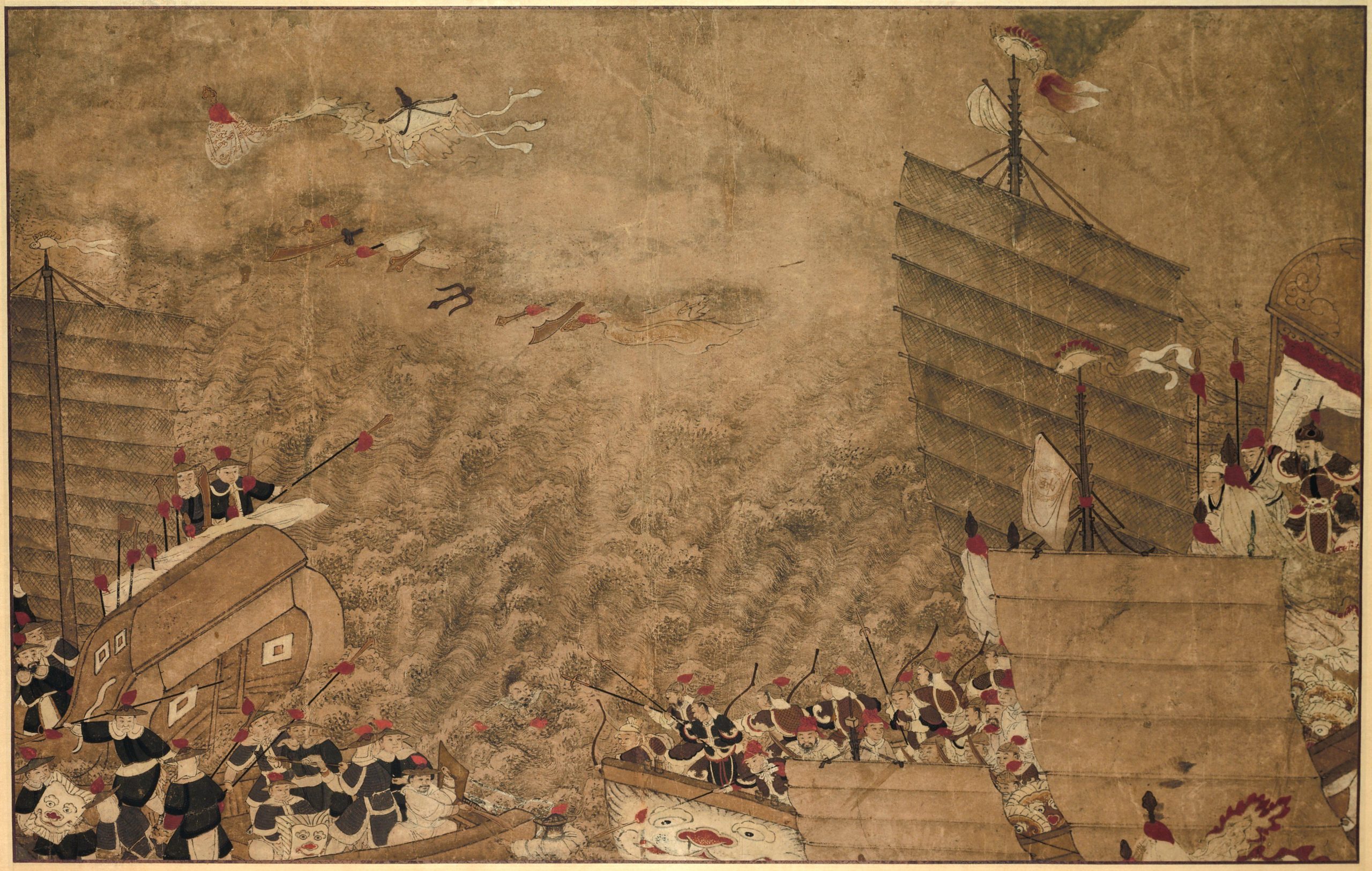 We carry on from where we left off. With Yasuke and Allesandro finishing up their meeting with Lord Arima. And so it was time for the two of them to return home, through the territory which was full of anti-Catholic people. And don’t forget, they had to leave from the castle which was under siege.

Now where one meeting did end we move on to another. If you remember the Jesuit and his entourage did not dock in Nagasaki as they felt the lord there, Omura Sumitada was not giving them as much as they should. And now he was feeling the pressure.

In the past he had not agreed to marry off his daughter to a Jesuit chosen man, he did not wish to force his daughter to do so. But, he still needed the Jesuit’s and their guns. And so he ventured over to the mission building in Kuchinotsu with an offer he hoped could not be refused.

He wanted to give them Nagasaki, not just the city, but all the land surrounding it.

Yasuke remained there in the meeting no doubt, but saw the Lord leaving empty handed. Allesandro not accepting the offer and gift straightaway.

He needed time to think it over. Now this thinking took several months before he made his decision.

In these months, they said farewell to the ship that had brought them, and the children that they had boarded on to the ship.

Like I said before Allesandro was not against slavery if it helped his cause and so he and Yasuke watched the board filled with children most of which were less than 10 years of age. From what I can tell these children were known as suteko, ‘thrown away children’ and the Jesuits believed they would now sail on to good Christian households where their souls would be saved.

Now as time went on, Yasuke began to work with the local military the Lord had left to devise defensive strategies for Allesandro, which included contingency and emergency escape plans. Later Yasuke would have it easier when Allesandro hired a Catholic militia, but right now. He and the small group of soldiers was all Yasuke had.

Over the next 9 months he spent time in Kuchinotsu and another place known as Kazusa, another seaport where the Lord had given the Jesuits several buildings. In fact he had given them here a Buddhist temple which they then converted into the first Catholic seminary in all of Japan.

Allesandro devised the entire thing, bringing in new acolytes to following their teachings. He would rise early, Yasuke always up before him scouting the perimeter before overseeing the preparation of his morning meals to ensure no poison was added into it. Like I have said, most days, at least for now for Yasuke were days of checking Allesandros food, walking the perimeter or standing guard during the Jesuits many, many meetings and prayers.

And so life continued that way until we find ourself at Christmas 1579. The printing press would not arrived in japan until 1590 and so Allesandro used many different plays to teach the local people of the stories of the bible.

So on Christmas day we find Yasuke dressed as Balthazar, who was according to the Catholics was the dark skinned Magi who gave the gift of myrrh to Jesus.

Life continued as before. Yasuke on guard, as Allesandro began to journey more and more around Kyushu, visiting other mission buildings as well as the other minor lords of the area. Though they had taken a long journey by boat to Japan, still they did so now as traveling by road in mountainous Japan was impractical, especially when factoring in the lords in the area who were against Catholicism.

And so, as 1579 drew to a close, Allesandro and Yasuke received word from the mission in Kyoto, Oda Nobunaga had suffered an embarrassing defeat, a man whom the mission relied on for protection. Perhaps they would have to make time eventually to make their way to Kyoto in the future.

But either way, by now a year had passed and there had been no deaths in the Jesuit ranks, and here I want to go back to the strange beliefs the Allesandro held. This one goes into race. Let us not forget he completely has entrusted his life to an African man. But Allesandro held firm to the belief that Africans  were incapable of understanding Christianity. They were strangers to all human refinement, lacking culture, talent and intelligence. And yet still we find him trusting his life to a man from this place.

Yasuke was becoming proficient in the Japanese language, no doubt through standing guard during Allesandro’s lesson in Japanese. Unfortunately, unlike Yasuke Allesandro never quite got a hang of the language.

As spring dawned in 1580 they moved to Nagasaki, now in complete control of the Jesuits after lord Otomo had offered it to them. In fact they had passed a law stating only Catholics could reside within the city. Here Yasuke gained the new role of training the local militia, these including refugees from around the area as well as the ronin, warriors who no longer had a master.

Yasuke now dwelled in the new mission building, located in a well-fortified position on a promontory. I am sure Yasuke felt a little at ease here, and that as long as they were here protecting Allesandro would be much easier than it had been at Kuchinotsu. And here he remained until September of 1580. Watching the port town of Nagasaki grow and grow as more joined the catholic faith.

But again it was time to move on. Yasuke would be heading east, to the lands owned by Otomo Sorin on Kyushu, and from there they would head to the mainland and make their way to Kyoto. Closer to Oda Nobunaga.

Yasuke had his work cut out for him here in Lord Sorin’s domain known as Bungo Province. He has the largest and most powerful lands on Kyushu and his ex-wife was very unhappy after he left her to marry in the Christian fashion. This wife, now known as Otomo Nata Jezebel, shaved her head, tried to kill herself, was put on suicide watch and threatened to take her daughters into the wilderness to die as punishment for the Lord leaving her. Now to make things worse, she was quite against Christianity, but also remained very powerful even after the Lord left her. She was a priestess of the war god Hachiman and retained many followers, including no doubt having access to ninja which dwelled in the area.

In fact during their stay in Bungo, the house of the daughter of his new wife caught fire (no others buildings did) and she barely made it out alive. Allesandro giving her a rosary in solace. So Yasuke once again was going to have to be on high alert. Now not just for soldiers, but ninja and the grand priestess.

But Allesandro as ever was undaunted. He has things to accomplish in Bungo. First he wanted to build another seminary, this one right under the protection of the Lords Castle. Second, to gather young Japanese nobles for pilgrimage to Europe. And finally, to find money to fund his trip to Kyoto and meet with Oda Nobunaga in person. Yasuke was closer than ever to meeting the most powerful men in Japan.

And now Yasuke found himself with a new threat. To get to Kyoto it would be another two week of travel, some by sea. A sea not just full of, but in essence controlled, by pirates. Of course, if one could pay a toll then you would be allowed to sail safely. Now they did pay, earning the protection of the pirate known as Lord Murakami of Noshima. Who, in fact, was the most powerful of all the pirates.

By now March of the next years has rolled around as Yasuke finds himself boarding a ship for Kyoto. Now of course Yasuke was vary, after all five years prior these pirates had been allies to the Mori Clan, who were heavily anti-Catholic. But it all worked out, and the pirates were to be trusted. As they travelled, they stopped off at islands along the way. Yasuke and the others sleeping in small forts or even pirate bases. And eventually, after all of the sailing they reached the city of Sakai, known to Europeans as the ‘Venice of Japan.’

Here Yasuke and the others were welcomed by a group of warriors send by Nobunaga’s most senior generals. A man by the name of Takayama Ukon. And so they move on to the estate of Konishi Ryusa, the first one here to have converted to Catholicism; here they could rest a while. They were to leave the next day to Osaka, a grand procession to lead the way, but plans went awry. People clambered to see Yasuke.

The crowds grew, the soldiers attempting to control the throng, in fact we know the guards were taunted and jostled, a roof collapsed as too many people stood on it to see Yasuke, and people fell through paper doors and windows as they lost their footing in the crowds. In the end Yasuke was forced to mount a horse to more easily push his way through the unruly crowds.

Easter week ended as they near Kyoto, Yasuke and the entourage being entertained now by Takayama Ukon who we have just mentioned. He was very devout in his Catholicism, who genuinely cared for the religion and not just the guns which came with it.

Easter Sunday festivities drew to a close with a messenger arriving for Lord Ukon and after reading he addressed Yasuke and the others saying.

Fathers and Brothers in Christ. We have been done great honour. Lord Nobunaga has requested us to proceed with all haste to his presence. You will be seen within mere days.’

And so on March 27th, 1581. Yasuke, with Allesandro and a large retinue of Jesuits, powerful people from Nagasaki, Bungo, Omura, Arima and Sakai, twenty-five choir boys, all with banners and icon of their religion raised high, they entered finally into Kyoto to meet finally with Oda Nobunaga.

A poem we have talked of before but never discussed or anyalsed. A poem in the theme of frogs, composed by Basho during a poetry competition.

Breaking the silence of an ancient pond, a frog jumped into water – A deep resonance

Header Image: An 18th-century Chinese painting depicting a naval battle between wokou pirates and the Chinese.