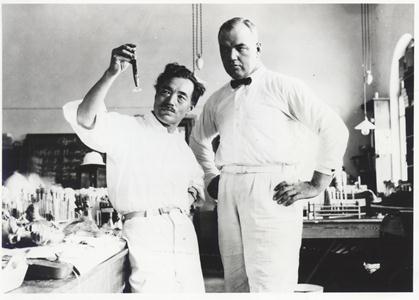 Hideyo Noguchi was was born on November 9th, 1876 so we’re almost reaching modern Japan. The Edo Period had ended 8 years ago by this point. And for those in the know he also went by another name, that of Seisaku Noguchi.

Now Noguchi was born in Fukushima Prefecture. And I have visit that prefecture, I went two years ago. To see how the prefecture was faring after the tsunami in 2011. That was interesting in itself, we even had a tour guide to take us to specific parts and show us videos of what happened right there when the tsunami struck. But, anyway, at the early age of one he is known to have suffered severe burns to parts of his body, particularly his left hand after falling into the fireplace.

Due to this he had to undergo surgery. In fact, he underwent surgery twice for his hand. Once in 1884 by Dr. Yukimoto Saito, and again in 1892 when he was 16 by Dr. Kanae Watanabe. His 2nd operation made him decide that pursuing the career of a Doctor was something he also wanted to do.

And we even have an inscription that he inscribed into the alcove of his house after one of these operations which says, I shall not return to my native home if I do not achieve my objective.

So at the age of 19 he took the National Medical Practitioners Qualifying Examination. And he passes, receiving his medical license. He started his first job after this at the Takayama Dental Hospital and it was then that he changed his name from Seisaku to Hideyo.

And while he was here he discovered a plague patient, and because of this he was shipped of to China to work as a Health Officer, becoming a member of the International Sanitary Board there.

Eventually he moves to America after his stint in China, where he begins to undertake research with snake venom, moving on to study in Denmark under a scholarship where he then learnt the basics of bacteriology.

Later on after this we see him moving back to America to begin a job as an assistant at the Rockefeller Institute for Medical Research and it was during this time that he discovered something which is why he was later depicted on the 1000 yen note.

His research into syphilis meant that in 1911, aged 35 by now, he discovered the agent of syphilis as the cause of progressive paralytic disease. Basically, he discovered a bacteria, one of the causative agents of syphilis, in the brain tissue of patients of partially paralysed patients due to meningoencephalitis.

Now of course, there is always a scandal. I am unsure, whether this is a thing that is taught in Japanese schools. I personally, knowing this would not have chosen this man for the 1000 yen note after learning this.

But, basically between 1911 and 1912 the Rockefeller Institute where he was working wanted to make and develop a skin test for syphilis. Now that all sounds well and good.  However, the control group he used, were either hospital patient who were already sick, or orphans. The patients themselves were already suffering from illnesses such as malaria, leprosy, tb or pneumonia; and the orphans ranged as high as 18 years old, to as young as 2.

Patients and children who weren’t really informed or told what this injection was.

If the researcher had said to these patients: ‘Have I your permission to inject into your system a concoction more or less related to a hideous disease? The [patients] might have declined.’

Now of course, this was in a time before right of consent and before laws were passed against human experimentation. However, the fact still remains that this occurred and these people weren’t really informed as to what was happening to them.

The Institute and Noguchi defended themselves, by saying Noguchi had tested it on himself first and proved it did not in fact give anyone syphilis. But, in 1913 it was discovered he actually had untreated syphilis and refused treatment from the centre.

Now, as we move forward in time from this it was discovered that yellow fever was caused by a virus, and not a bacteria as Noguchi had believed. He feared for his reputation and so went to Lagos to try and undertake more research. He didn’t like it there he moved to Accra in Ghana and being invited by Dr. William Alexander Young.

But, there was something wrong. Noguchi was oftentimes volatile and very secretive, often working throughout the nights to avoid other researchers. Some diaries from the time even notes the Noguchi was almost bordering on the side of paranoia whilst he was here.

Whether this was a result of the untreated syphilis, which could have turned into by neurosyphilis by this point we can’t be sure. But diaries entries also stress that Noguchi may have even thought himself immune to Yellow Fever during this time, after ‘inoculating’ himself with a concoction of his own design which may not have been a true vaccine.

And so by 1928, having failed to find any proof to his theories he was sent back to America. Sadly though he never made it home and he was removed from this ship May 12th having been diagnosed with Yellow Fever. By May 21st of that month he had died.

William Young is known to have visited him in the hospital, William’s notes saying Noguchi smiled at him and asked him if he was sure he was quite well, to which William replied he was.

William then died himself seven days later also of Yellow Fever. No doubt because Noguchi had been failing to keep mosquito’s carrying yellow fever inside specially designed secure housing at their labs.

Noguchi’s body was laid to rest, not in Japan but at Woodlawn Cemetery in the Bronx, New York, June 15th of that year.

Todays poem is by Yosa no Buson and he was a well renowed painter and poet of the Edo Period, livng from 1716 to 1784. During Buson’s time temples were a common place for evacuees to go to for safety.

My wife and son
eat in the temple
because of the typhoon.