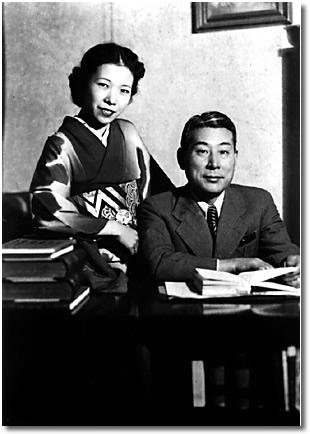 Chiune Sugihara was born 1 January, 1900  in Gifu prefecture. The second son of Yoshima and Yatsu, he had 5 brothers and one sister.  His family lived in a borrowed temple, close to Kyosen-ji.

He moved to many elementary schools but in December 1907 transferred to Nagoya Municipal Furuwatari Elementary where he graduated with honors. After he moved to Aichi prefectural secondary school, a combined school for both Junior High and High School Students.

As he grew up his father wanted him to become a physician, but Chiune did not share his father’s future idea. He failed the entrance exam for the course by only writing his name.

In 1918 (Taisho Era 7) he entered into Waseda University where he studied to major in the English language. To help improve his English he also entered into a Christian fraternity founded by a Baptist pastor. And in 1919 he finished the Foreign Ministry Scholarship exam.

Chiune served for a time in the Japanese Imperial Army as a second lieutenant from 1920 to 1922. During this time he was stationed in Korea, which at the time was still a Japanese colony. However, by November 1922 he resigned from the post and moved on to return to education, passing the Foreign Ministry Language Exam the next year, which he passes with distinction.

Because of this distinction, he was recruited by the Japan Foreign Ministry and eventually assigned to China in the city of Harbin. While he was there, he also studied Russian and German. We could say he was a man very skilled at learning languages.

Now some time passes, and he is now serving the Manchurian Foreign Office (What is Manchuria? It was a term coined by the Japanese to cover a large area of northeast Asia, which could encompass large sections of China and Russia.)

During his time here he took part in negotiations with the Soviet Union about the Northern Manchurian Railroad. And it was during this time he married for the first time. Converting to Christianity, he married a woman called Klaudia Apollonova. His baptized name during for this marriage was Sergei Pavelovich.

However, by 1935 he quit his post as he disagreed with the mistreatment of the local Chinese living in this area. This mistreatment being caused by the Japanese who oversaw them.

And so he divorced Klaudia and returned to Japan.

Here he married his second wife Yukiko Kikushi and together they had four sons.

World War Two begins on September 1 1939. This same year Chiune moves to Lithuania, and the city of Kaunas. His role whilst here was to keep tabs on the Soviet and German troop movements and to relay any plans the Germans may have had to attack to Soviets. He was to relay these findings to his superiors in both Berlin and Tokyo.

1940 rolls around and the Soviet Union occupies the country of Lithuania. As we know, the Second World War was a very dangerous time for many groups, including Jews, minorities, homosexuals, and many others. What made it even more dangerous, was the in Luthuania, Jewish people made up a third of the urban population. There were thousand upon thousands of people in urban Lithuania who were now no longer safe.

And they all wanted to leave and were desperate for exit visas. Unfortunately it was virtually impossible to find someone or some country willing to issue them so they could escape. In the end, hundreds and hundred of them came to Kaunas where Chiune was, trying desperately to seek visas that would take them to Japan.

And Chiune wants to help, you know, he can’t see these people die. Or suffer. He can’t leave them stranded. And so he contacts the Foreign Ministry in Japan asking how he can help these people. How he can give them visas.

And every time Japan says no. That these people who aren’t safe, these people who could die, did not fit the criteria to be worthy of a visa. They needed money the Ministry told him, that they had already undergone appropriate immigration procedures, and that they also held another visa which let them go to another destination, as they couldn’t remain in Japan. (Honestly this makes me so angry). And the Ministry said that they would not make an exception.

And Chiune did the only thing he could do. He disobeyed, he went against his orders, which for Japanese people is almost unheard of. And at times is very difficult to do.  (They are a culture where they do what they are told.)

And so on July 18th 1940 he started writing his visas, ten day visas which would give all these people a safe passage to Japan via the Trans-Siberian Railway. Though it did have a cost, and the Soviets demanded that these people pay 5 times the normal ticket price if they truly wanted to escape and leave.

He hand wrote these visas, from 18 to 20 hours a day. Each day he wrote a months’ worth of visas, and he didn’t stop until the 4th of September. He had written thousand of visas to allow people to reach safety, at times ensuring he gave them to the head of a household as it allowed and permitted them to take their families with them.

Chiune was reassigned to Konisberg in East Prussia.

Some reports state he left his consulate seal, so other people could make more visas after he left, though his son in a interview has stated this to be false. Others report, he continued to write visas while still leaving and making his way to his hotel, handing them out as he left. And then boarding the train at Kaunas Station he continued to write on the train as many as he could. Throwing them out the window to those who were still desperate to leave. And as the train left, in desperation he merely made sheets with his seal and signature to throw from the train which hopefully could have the rest of the ‘visas’ written upon it later.

The last thing he did as he left was apologize he couldn’t do more. Saying, “Please forgive me. I cannot write anymore. I wish you the best.”

It is said, someone could be heard saying. “We’ll never forget you. I’ll surely see you again.”

Chiune had done everything he could have for these people.

During the Second World War between 91 and 95% of the Jewish population of Lithuania were Jews. (Want to double check this figure with you! Did you mean killed?) Which was pretty much, every single Jew who didn’t manage to leave the country. It is the highest casualty rate of any nation for the Holocaust.

It turned out* that Chiune was responsible for saving the Mir Yeshiva. A Yeshiva is a Jewish Educational Institute with a focus on studying traditional religious texts such as the Talmud and Torah. This was the only European Yeshiva that survived the Holocaust. Because of Chiune this Yeshiva survived and made it way to Kobe where is stayed for a while (Feel free to ask where it went next.)

In total it is debated how many Jews Chiune saved, some say 6,000, others say, 10,000.. It is difficult when you consider, one visa could save and ensure the safe travel for an entire family.

However, recently I discovered that there is a museum around the corner form Tokyo Station about Chiune where it lists what they say is ‘all 2,139 name of the refugees who received life saving visas.’

Chiune and his family were now stationed in East Prussia, But by 1944, Soviet Troops invaded. He and his family were interred in a POW camp where they stayed for 18 months. Eventually released in 1946 they returned to Japan and the following year he was asked to resign.

Now some sources would say it was because the Japan Foreign Office was downsizing, but there are also other sources, and even his wife says this, that he was asked to resign due to, I’m using quote marks here, “that incident in Lithuania.” Which if true, is quite horrible. They new what he did to save all these lives, and instead of thanking and celebrating him. It seems like they made him resign, as it went against their orders.

It wasn’t until 1969 that people began lobbying for his recognition for what he did to save all those lives and the following year in 1970 he was given this recognition and called Righteous Amongst the Nations. Sadly he was too ill at the time to travel, and so his wife and son Nobuki went on his behalf.

In 1985, he was asked for the reasons he did what he did. And this was his response.

You want to know about my motivation, don’t you? Well. It is the kind of sentiments anyone would have when he actually sees refugees face to face, begging with tears in their eyes. He just cannot help but sympathize with them. Among the refugees were the elderly and women. They were so desperate that they went so far as to kiss my shoes, Yes, I actually witnessed such scenes with my own eyes. Also, I felt at that time, that the Japanese government did not have any uniform opinion in Tokyo. Some Japanese military leaders were just scared because of the pressure from the Nazis; while other officials in the Home Ministry were simply ambivalent.

People in Tokyo were not united. I felt it silly to deal with them. So, I made up my mind not to wait for their reply. I knew that somebody would surely complain about me in the future. But, I myself thought this would be the right thing to do. There is nothing wrong in saving many people’s lives…The spirit of humanity, philanthropy…neighborly friendship…with this spirit, I ventured to do what I did, confronting this most difficult situation—and because of this reason, I went ahead with redoubled courage.

Sugihara died the following year on 31 July 1986. And in spite of the publicity given him in Israel and other nations, he remained virtually unknown in his home country for a long time. It was only when a large Jewish delegation from around the world, including the Israeli ambassador to Japan, attended his funeral, did his neighbors find out what he had done.

Yamanoue no Okura (山上憶良) was a waka poet and lived during the Nara period. He is said to have died at the age of 74 in 733AD.

It is known that in 701AD he was sent to China, as part of an embassy which was led by a man known as Awata Mahito. His poem today comes from the manyōshū and goes as follows:

Even if this world is full of pain or easy,
it doesn’t matter
I can’t help staying here
I am not a bird at all.