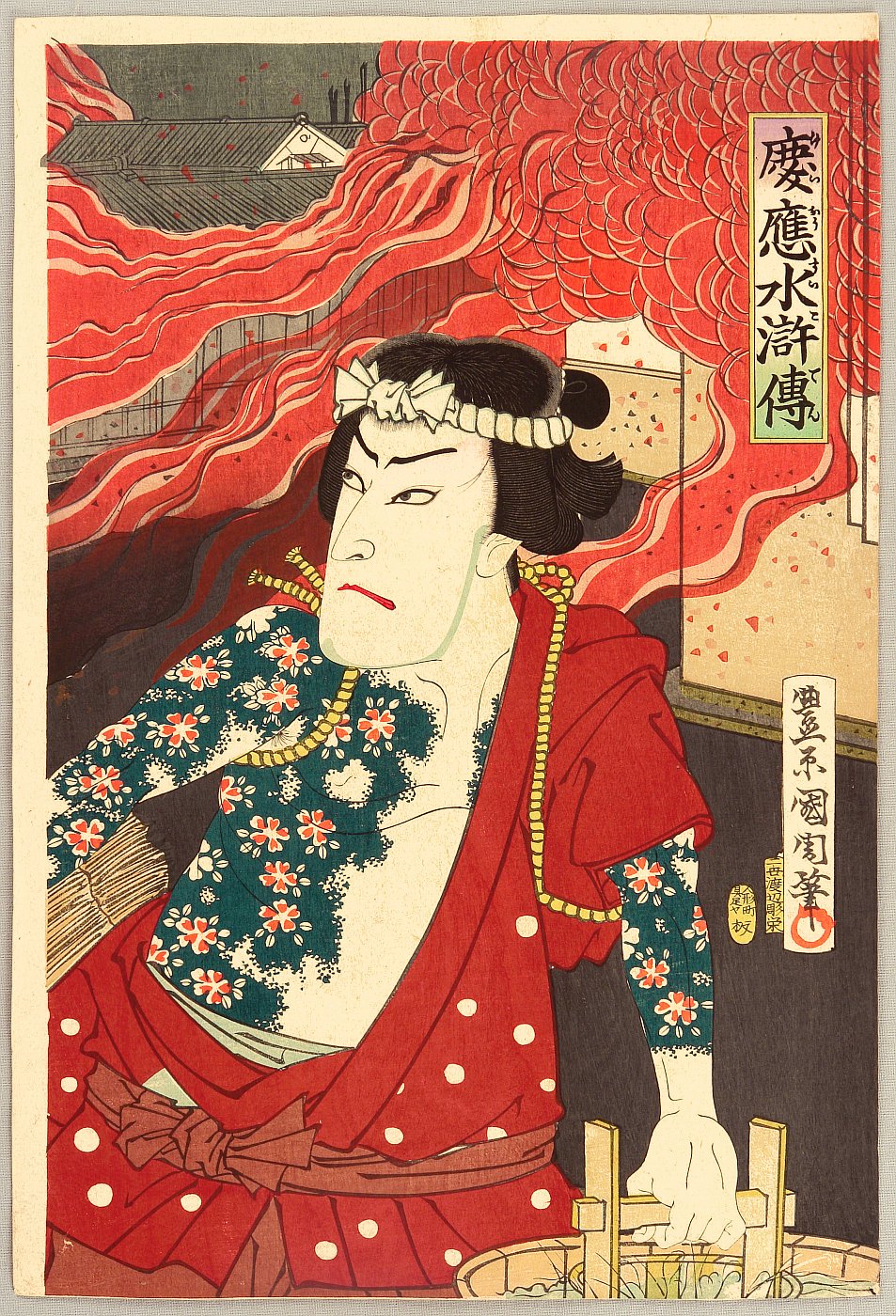 Show Notes for episode 66A of our Podcast – Tattooing a History.

Now first off I want to say there was an unfortunate death in my family recently, hence the break in episodes. But we are here now. And I am much better than I was.

But now today we look into the history of tattooing in Japan. And first, as usual I have to ask you Heather what you already know about this topic, aside from the 7th Bonus we did a while back about the doctor who collected the tattooed skins of many members of the Yakuza.

We start our history with a book from China known as the Hou Han-shu (History of the Later Han) where they describe the people of Japan as a group of islanders who took great pride in dedicating time to cover their body in decorations.

Now the Yakuza still hold the image for people with tattoos in Japan, which again gives it the idea that it denote someone of a criminal lifestyle, or at least people who are less reputable. So lets look first at the tattooing of criminals.

There are different terms for the art of tattooing in Japan, one of them known as Irezumi (Inserting Ink), this term has changed in meaning over time and originally was used to denote those who had been punished due to past transgressions and crimes. These took the form of tattoos on their faces holding symbols of their crimes so others knew what they had done. The arms could also be included in this form of punishment, with bands and geometric designs being placed upon the skins to show the crime committed and also the sentence to be served.

Additionally it would also be placed onto those of lower status, not because of crimes committed, but to denote them as people to avoid. These people were known as the Hinin (pariahs), and held jobs considered unclean or tainted such as Tanners, Butchers, Executioners and Gravediggers. These warrant more exploration and might make an interesting bonus episode. Finally we find this particular practice falling into disuse after 1720 when the then shogun abolished the practice and now to distance themselves from this age old practice, tattoo artist began to call themselves Horoshi. Now a bit more about that shortly.

And so turning away from the treatment of criminals, we look into the ‘bodysuit’ as it is known in Japan, the art of covering ones entire body in tattoos, and here we see that it can find its origins as a symbol of love. Some of this could be rather simple in design and was known as irebokuro, consisting of a collection of black dots, which symbolized doken or symbols of love. These often being seen in people from, and who frequented the old pleasure quarters of Japan and had fallen in love with their suitors. It seems this practice wasn’t seen as overly taboo and even made it way to Tokyo where the upper classes began to follow this fashion.

Of course as time passes, fashions change and the dots developed into using Kanji, Geisha known to have tattooed upon themselves the names of their favorite clients. The term irebokuro then becoming known as kishobori (Offering Tattoo).  This practice expanded to not just be used by Geisha, prostitutes and their clients but also into the clergy. There is even one account of a monk known as Sansaburo who had the kanji for love alongside the name of a monk of higher status to him showing it was even used by homosexual lovers.

We just talked about how artist began to call themselves Horoshi, so lets look into that now. This word comes from the verb horu in Japanese meaning to carve, and irezumi found itself replaced with horimono meaning carved object. So why this particular choice? Well as it turns out, they specifically chose if to relate to those who created the many wood blocks that were then used to make ukiyo-e art, and additionally even some people who made these wood blocks took up tattooing.

So why was that?

Well, of course we had the artists who made the designs for their art, think Hokusai and his 36 Views of Mount Fuji, but he only made the art, he didn’t create the wood block print to make his designs he thought up. These carvers, seldom found the renown of the artists. And so they found that they could increase their trade and fame through tattooing. As ukiyo-e boomed in Edo, and artistic freedom abounded, more and more people were wanted the designs made by artists placed upon their bodies. And who better to do that, then those who literally carved the wood. They took their expertise and placed in onto human skin.

One particularly publication, which included art by Hokusai, that sparked this want for tattooing was the Suikoden, a book recounting a famous 14th century tale from China. Inside it was filled with artistic depictions of the characters from the book, and the people of Edo wanted what they saw. And why was this you ask? Well each of the 108 characters in this book, were covered in tattoos. Each unique to the man and women in question.

But what of the other tatoos we think of when it comes to Japan? What of the yokai, the yurei and all things supernatural? Well we have two people who helped with this. Tsukioka Yoshitoshi and Kawanabe Kyosai. The two of them were a little obsessed with death and even created situations which brought them close to it so they may better create their art. Kyosai, in a very bizarre and disturbing turn of events watched over his wife after her death. He kept watch over her to watch her decompose, so he may see the moment when he ghost left her body. Rumors even circulated he killed his wife himself so he may see the ghost of her to fuel his art.

We can first look at the samurai, I myself never associate Samurai with having tattoos, but for myself I was always taught tattooing in Japan was taboo and also had been. However, we are getting a very different picture of that today. Samurai would at times be tattooed with the clan they were a part of, and should they go into battle, they could have the date of it tattooed on them; assuming they would never return. There are tales, that those who survived then committed ritual suicide so that they honored their death date they had just received as a tattoo.

When the period of war in Japan drew to a close, and there was a time of peace, of course group of thieves and the like grew up in the big cities of Kyoto for example.

Gangs would use their tattoos to intimidate. There was a practice known as musen yukyo which can translate to ‘Going for a walk with empty pockets,’ in essence they would enter an establishment and demand stuff for free; their tattoos like I said used to intimidate.

But it wasn’t all bad. There was also a group of people known as the otokodate that grew up, acting as saviors of the poor. They would often have tattooed on themselves the imagery from those mentioned in the Suidoken, seeing themselves as the same as those age old heroes who helped the unfortunate. The poor loved them, and supported them so much their influence spread to Edo where it also began to be imitated, those that did it here called themselves Edokko. Again these took the imagery from the Suidoken using it as a reference point, and as most were those who carried litters around the capital often worked bare-chested and have no aversion to showing to those around them who they were and the tattoos that covered their bodies. Their tattoos also differed in that, happy to show them off they used them to show their profession. Professional gamblers would have dice or cards tattooed , fishermen would have fish, Geisha it is said even had plectrums tattooed on themselves; to denote the samisen that they could play. So too did firefighter have bodysuits, the symbol of their profession upon their bodies, but also imagery of dragons and water. The pain of the dragon tattoo would afford them protection from any fire they had to attend to as the dragon was the only animal that could survive fire.

However, it all couldn’t last. Those in charge in essence didn’t like the popularity of tattooing, and so criminalized it in 1804. In fact we could probably say it is the governments fault people to this day see tattooing as a symbol of criminality, or at least tabboo; but I hope perhaps that will change. It went from something that anyone had, both good people and bad, to being something that could be punished under the law should give or receive a tattoo. In fact it wasn’t until 1948, the ban was lifted except to those under the age of 18.

The prohibition of tattooing only served to give it more mystery. European Royalty came all the way to Japan to be tattooed by tattoo masters. Ironically the government allowed foreigners to enter to encourage tourism, though locals who got tattoos would still be punished as would those giving the tattoos. Foreigners could escape punishment by just leaving the country. King George V of England even came to Japan for a tattoo which was met with astonishment by those back home, the Duke of Winsor apparently saddened he had not been able to go and get one for himself.

And so edge closer to the 20th century. It appears that people began to take on alias as tattoo artists. We mentioned how their occupation came from the verb hori to carve, and so tattoo artist started to use this at their start of their alias name for example Horiuno I.

Finishing up with a quick look at this master. He worked into his seventies, and his work was so highly regarded that eventually his clients began to show off their tattoos in the Sanja Matsuri Festival every year. And it still continues to this day, you can go and see people showing off their tattoos, and looking at some pictures online the tattoos look amazing. Again this makes me hope people will continue to change their opinion on tattoos in Japan.

Horiuno I found himself arrested at one point for his work on a back tattoo for his apprentice  Horibun I which brough the two close together. Before this Horiuno had tatooed Yakuza members, but after would only tattoo honest men who wanted tattoos; his thinking being Yakuza only wanted tattoos to look tough and intimidating instead of others who appreciate it as an art style. These men and others have now created their own dynasties, passing on their names to their sons of apprentices so the art of tattooing in Japan continues to this day. And to get an idea of how long an apprenticeship can be. For Horiuno I it took 20 years.

Today we have for you an annonymous Senryu poem.

The palaquin bearers,
Flying in the air,
Have clouds and dragons
On their arms.

Palaquin bearers usually had tattooing on their backs and arms, to give themselves lightness and speed. These bearers had dragons and clouds tattooed on them. It is superstitious perhaps but also, or therefore, human.