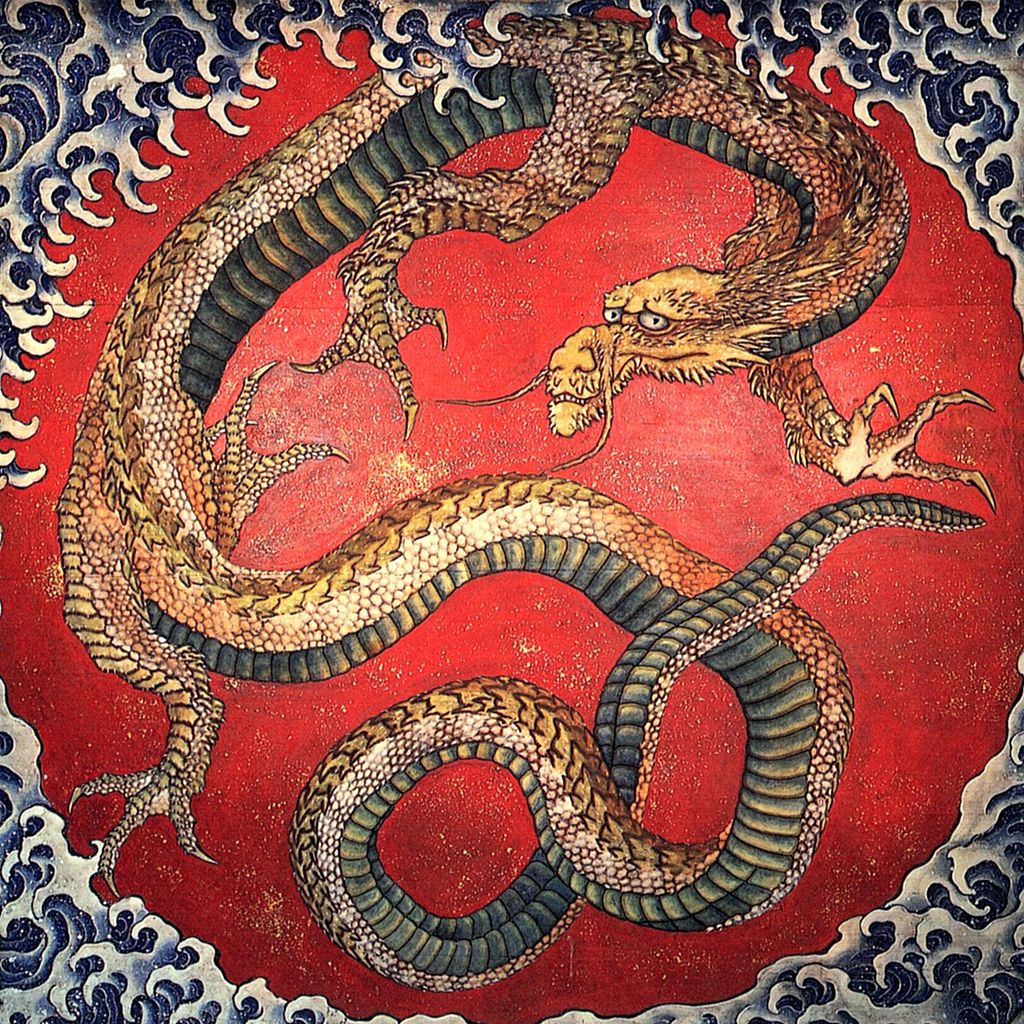 Show Notes for episode 66B of our Podcast – Tattooing – Animal Imagery.

Well today I must start off by saying the Dragon which I was calling Yamato no Orochi is Yamata no Orochi. I completely misread the name and have been doing so for years!

So lets look this week into the imagery that one might see in Japanese tattoos.

Of course, there are depictions of animals, people and also supernatural creatures. So let us dive into the animal side first and look at the descriptions of the different creatures so you have a better idea of what you maybe bee seeing upon someone with tattoos.

Now, it seems right to talk first of koi for Japanese tattoos. Often we will see them tattooed trying to swim upstream, this acting as a symbol of perseverance.  Legends about this (as Heather told us on the Pokemon episode) of how a koi going upstream that crosses the dragon gate will transform into a dragon and become eternally happy. Other tattoos may even show koi having reached the dragon gate and have begun their transformation, these creatures known as koiryu. When it comes to colours, we can see higoi (red), magoi (black) or nishikigoi (living jewels)

Koi can often be depicted alongside people, one of them being Kintaro. Again we have talked of him, and his journey to defeat the oni. In tattoos we can see him fighting a koi, and this tattoo is actually names a koitaro.

Other koi can be paired alongside Benkei, who was a warrior monk. This tattoo depicts him upon the back of a giant carp when he is still a child. The story goes that as child he saw his mother abducted by a giant carp and so swore revenge on the fish, when it returned one day he jumped on its back to kill it; and only after doing so did he realize the fish he was now on was the ghost of his mother.

Hawks are important in Japan as symbols of prosperity. If one should dream of a hawk and aubergine flying over Mount Fuji on New Years Eve you will have a very prosperous year. In tattoos hawks can be seen perched on rocks and branches, searching for their prey in a soaring pose.

Tanuki and even goldfish deserve a mentioning here. For goldfish, they were the poorer equivalent of the koi mentioned above. Tattoos of the lower classes, whereas koi were more for those with money. Symbolizing abundance and happiness. For the tanuki their tattoos were to show joy, friendship and a desire for fun.

Tigers can also be seen in tattoos, symbols of the forces of nature and the wild instinct of man which one must learn to contain. They can also be portrayed as appearing through bamboo canes, as they were thought as the only animal capable of walking through bamboo forest. This depiction was to symbolize the weak giving shelter to the powerful.

The catfish, is often seen as a symbol of earthquake, in fact there is one known as the namazu which was so big, that every time it moved would cause earthquake to happen. To stop this the god Kashima would sit on it with a large rock to control it. Tattoos of this catfish are symbols of a yearning to be free.

So now let us look at the supernatural creature side of things.

I think the first one we may have mentioned before in our Pokémon episode and that is the Hōō or the Phoenix. Now should you come across this creature the main things to be looking out for would be an animal with the neck of a pheasant, comb like that of a rooster and it would also have long feathers like that of a peacock.

Should the tattoo be colored then the feather would consist of black, white, red, green and yellow which symbolize benevolence, purity, education, wisdom and gentleness. You may also see it alongside the paulownia trees as this we the only tree that it would make its nest in.

They are symbolic of the imperial family, namely the empress and so can be combined with a dragon alongside to represent the Emperor, used to symbolize completeness or a sense of ying and yang. Alternatively they can be paired together to symbolize the mounts for the messengers of the sennin (or Immortal Hermits).

Keeping on from the mentioning of dragons, they were symbols of wind, fire, and water. In fact we saw this in a way with the tattoos we talked of in the last episode, being the favored tattoos of firefighters. They did have heavenly origins, and I found out that they were even enemies of the sun and moon, with eclipses happening when dragons tried to devour them.

Appearance wise, they bring together a lot of different animals. Head of a camel, horns from a stag, eyes of a hare and ears from a bull. They have the crest of a phoenix, body made from a snake, but scales from that of a carp. Their feet are those of a tiger, but they have claws of an eagle. A lot of the time they would have four legs, but if they have wings then they would only have two and additionally have the tail of a phoenix.

Now Heather did you know dragons have fears? They fear centipedes, silk dyed in five colors as well as iron.

Now if you are looking at a dragon tattoo, count the claws they have. Japanese dragons have three claws, in China you would see four or five.

Dragons will likely be shown flying inside and around cloud that look a little like fungi shaped clouds. This is in fact deliberate, they represent the mushroom known as the reishi, a mushroom of immortality and eternal youth.

Spiral clouds would show to you the dragon alongside it is full of either water or fire, ready to be used.

If they hold flaming pearls, this is the item which holds all their power, and they are known as Buddha pearls.

When we see Dragon with sword designed with a vajra hilt (picture in show notes, we also mentioned this thing long, long ago when we talked of En the Pilgrim) this kind of depiction is called a Kurikara Ryu.

Stories relating to dragon can also be represented, one in particular known as the Muge Hoju no Tama. The Dragon King Ryujin had stolen a jewel which could control the tide as it was being taken to the Emperor. After many twists in the tale (I really want to find this story now) a fisherwoman figures out how to get the jewel back into the hands of the Emperor. Knowing Dragons do not touch dead flesh, she pierces her side and places the jewel inside of her. Her lifeless body then rises to the surface so the jewel may return to the Emperor.

Now Heather, if you are a Dragon that has fire, in a tattoo where would you show the fire coming out from?

Apparently the only two places you can show fire coming from is either the jewel it holds, or coming out from its shoulders as this is where it carries fire.

If you see someone with a tattoo made of nine dragon, this relates to the Suikoden we talked of last episode. his dragon was the tattoo of Shi Jin, a martial arts expert who lived as an outlaw.

Additionally there is a subset of this, this being the dragon-snake. The first being simply, the snake as we know it, or hebi in Japanese. Here these tattoos would serve as as imagery as an evil attacker or to symbolise the feminine side (though in a negative context). The other dragon snake would be the one in which we have discussed before, that of Yamata no Orochi. Tattoos for this epic event in Shinto Mythology would at times cover an entire persons arm or even a full body suit would be created to show the fight between the Dragon and the God Susano-o.

Moving on to a creature which is made up of the body of a lion, scaly skin of a fish, and deer horns and hooves. This would be a kirin. People think it is a corrupted version of a giraffe hence the name kirin (giraffe in Japanese) but that is not concrete. These creatures and tattoos of them would serve to symbolize good luck or a positive event. Flames may also be included around the creature to symbolize serenity, which it has in such abundance that it flows out of the creature.

We turn now to the Shishi or the Lion. Traditionally this is one of the two lions you seen guarding the entrance of temples in Japan. The shishi is denoted as the King of Beast and when depicted in tattoos you will see it next to a peony, known as the Queen of Flowers; this kind of tatoo is known as a karashishi-botan. Their skin is said to be stronger than the best helmet, and so you can see it tattooed onto pregnant women’s stomachs to protect the unborn child during pregnancy.

-It can’t be helped

There is no ginger (pun)