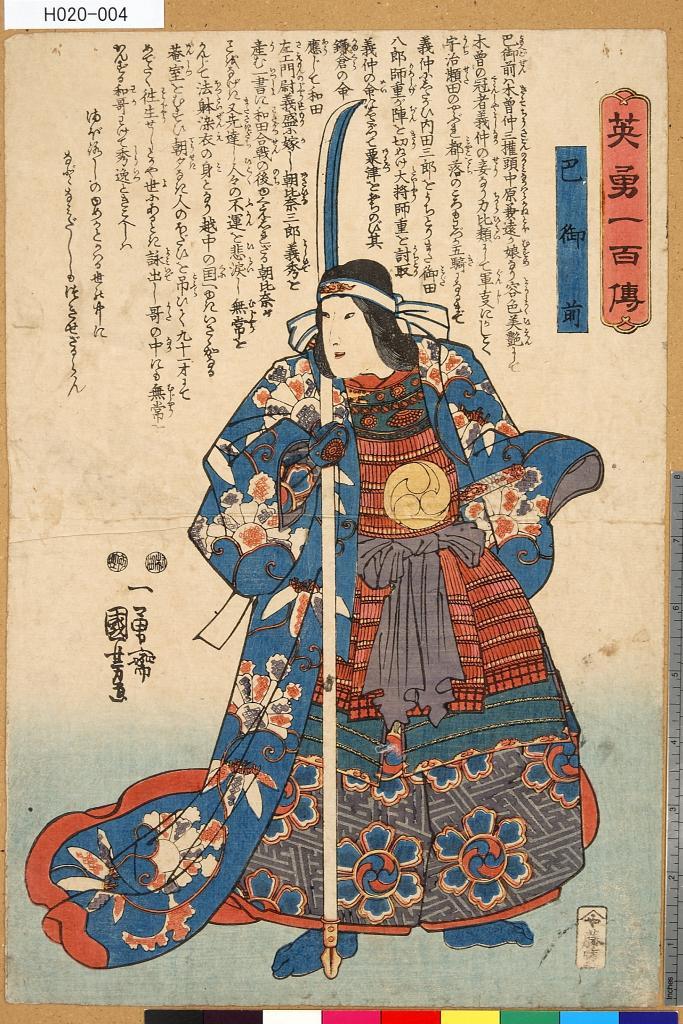 Show Notes for episode 31 of our Podcast – Lady Tomoe.

Now before elaborating about how she was a Samurai, as there may be some listening thinking that only men could be Samurai, I wanted to talk a little bit more about her background.

Now we know Lady Tomoe was born on January 1157, the daughter of Nakahara no Kaneto and Chizuru Gozen, and her father was also a Samurai a part of the Nakahara clan from what I could glean from the Japanese sources I looked at briefly for her father. (See even I am having to go into Japanese now for this show! Really need to start studying it again). As for her children, we know of one by the name of Yoshitaka that we are comfortable in saying was her son. However, the other three sons, Yoshishige, Yoshimoto and Yoshimune, it is unclear whether they were actually her sons or not. The Gozen part of her name, is not actually a name, but rather an old archaic title used to mean something like ‘her ladyship’ or ‘my lady,’ which means we unfortunately do not know her last name. She is thought to have served as one of the concubines of Minamoto no Yoshinaka whom her family had close ties with, and she died in 1247 at the grand old age of 90. And if you wish to visit her, you can find her resting place in Otsu City. And I swear when I chose this woman, I didn’t know this or if I did I forgot but, Otsu city is located on the shores of Lake Biwa.

So going back to the whole Samurai thing. Now as I said, some people may be thinking that woman couldn’t be Samurai, and in a way you would be correct. However, there were a group of woman, who were included within the Class of Samurai (or bushi as it is known in Japanese), and these women were known as the Onna-bugeisha.

Onna-bugeisha in English being Female Martial Artist, and yes basically they were a group of female warriors which belonged to the Japanese Nobility. These women would happily join Samurai in battle and fight alongside them and were fully trained to be proficient in the use of weapons to be used to protect their house, family, as well as honor in times of war.

Now if we want to know more about her appearance and overall character we can turn to the 14th century epic known as The Tale of the Heike which is a story compilation of the struggle between the Taira and Minamoto clans who were vying for control of Japan during the end of the 12th Century in what is now known as the Genpei War.

Tomoe was especially beautiful, with white skin, long hair, and charming features. She was also a remarkably strong archer, and as a swordswoman she was a warrior worth a thousand, ready to confront a demon or a god, mounted or on foot. She handled unbroken horses with superb skill; she rode unscathed down perilous descents. Whenever a battle was imminent, Yoshinaka sent her out as his first captain, equipped with strong armor, an oversized sword, and a mighty bow; and she performed more deeds of valor than any of his other warriors.

So, a rather impressive woman from the looks of it. The mentioning of the ‘oversized sword’ is of interest here as it is debated at times over what this actually meant. However, generally is thought to have meant that Lady Tomoe wielded a naginata. These weapons, which consisted of a sword blade attached to a long pole, and did grow in prominence around the time Lady Tomoe lived. It even became a important inclusion for the dowry of a samurai’s wife. And the martial art known as naginata-jutsu which primarily uses this weapon has remained an important female sport into modern times in Japan.

Now in 1183, there was the battle which we now know as the Battle of Kurikara, in which Lady Tomeo found herself alongside Yoshinaka her Lord and, let’s say husband. The battle was a resounding success for the Minamoto against the Taira Clan, one of the main reasons for the victory being the fact that they unleashed stampeding cattle with flames attached to their horns directly into the Taira Clans ranks.

In 1184, there was another battle, the Battle of Awazu on January 21st of the that year. So Lady Tomoe at this time is merely 27 years old. This battle was fought against the cousin and rival of her husband Yoshinaka, and basically came about after Lady Tomoe’s husband betrayed his cousin. His cousin was called Minamoto no Yoshitsune (who trust me will have to get his own episode) and unfortunately the battle did not go well for Lady Tomoe’s side. It is said she did behead a few people, such as Honda no Morishige. It is also known that two Samurai by the names of Uchida Ieyoshi and Hatakeyama Shigetada attempted to capture her during the battle, but Lady Tomoe evaded them and slew Uchida.

Now like I said, the battle did not go their way, and what once started as a force of some thousand men, now numbered only less than ten likely remained. Lady Tomoe, as she was no Samurai and exempt to some of their creeds, was told to flee the battle field by her husband.

Yoshinaka is said to have recited the following to her:

I shall die in battle. Or if I am wounded, I shall take my own life, but it shall not be said that Yoshinaka came to final end in the company of a woman!

Now she cannot merely leave the battle, and so she hangs back, wanting to find one last deed she can do to show her bravery. In that moment, thirty enemy on horseback are said to have appeared and so she rides instantly into their ranks, grabbing one with such force she drags the man onto her sadly with her before twisting of his head and riding away, shedding her armor as she does so.

All the men in the group who just witnessed the act lost for words.

So what happened next for Lady Tomoe? Well sadly we don’t really know. Some people believe she remarried, some say she retired to be a nun. But unfortunately that is where he story ends.

So what do we see when we look into the legacy of Lady Tomeo. Well, we know of a Noh play written about her by a man called Zeami, born in 1363.

Now the play was called Tomoe, after her, and is classified as a nibamme-mono or ‘two part play’. And it’s the only one of this genre in which the main character is a woman.

The story starts on Lake Biwa, where a travelling Buddhist monk encounters a women who requests he pray for the dead. As he prays an apparition appears, that of Lady Tomoe. The warlike mistress of Minamoto no Yoshinaka relates the tale of how she was not allowed to commit suicide with her lover and the time of his defeat. And after, wielding a halberd she demonstrates her courage with a battle dance before finally disappearing.

She has appeared in a book series about her life by Jessica Salmonson written between 1981 and 1984, she’s appeared as many characters in video games including Sekiro: Shadows Die Twice as a mentor to one of the antagonists.

And finally, she appears in the Festival of Ages, held on October 22nd every year at the Heian Shrine in Kyoto.

Todays tongue twister from Heather is one about peaches.

Peaches and
Plums
Are both in the Peach family.