EP26 Okiku and the Nine Plates 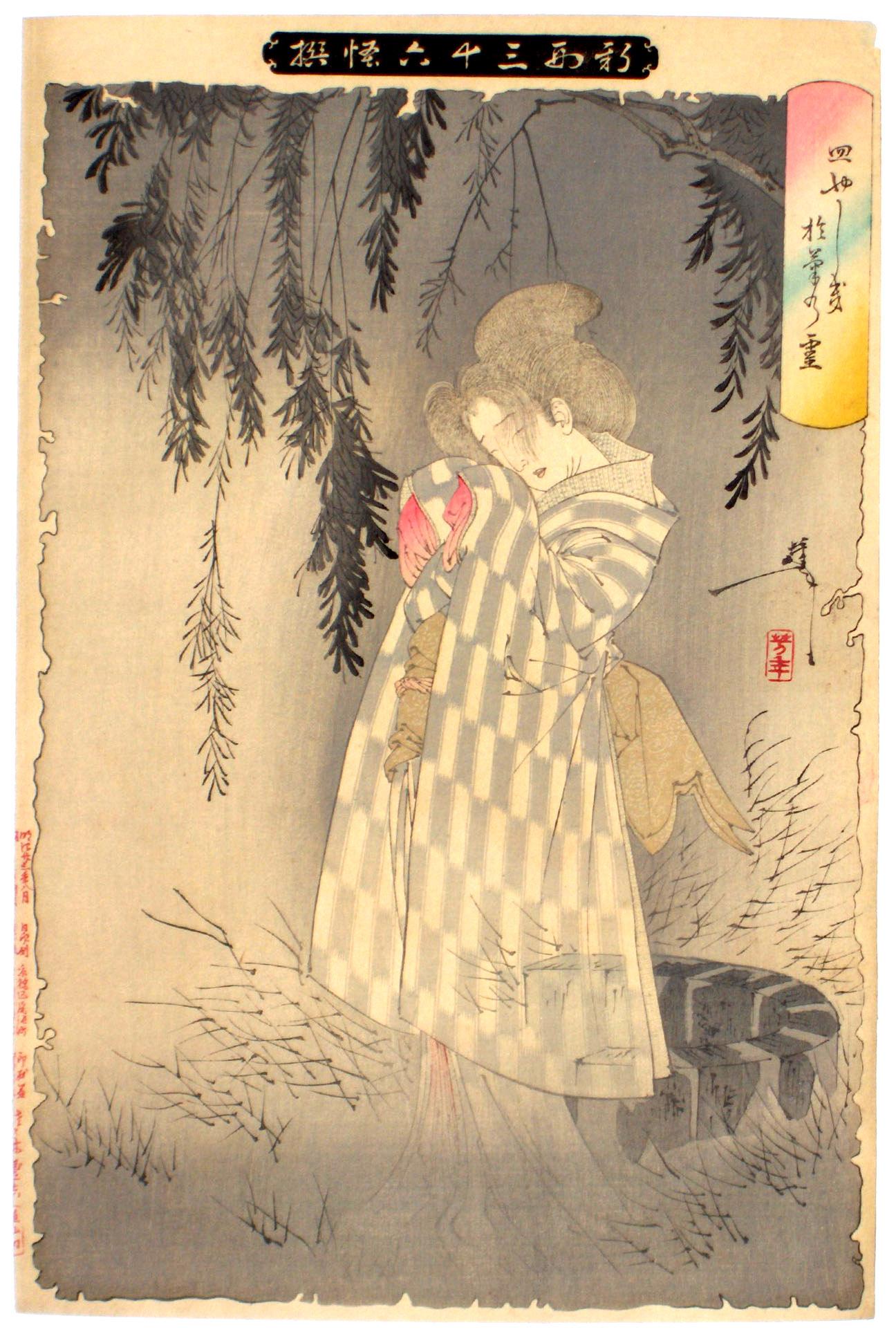 Show Notes for episode 26 of our Podcast – Okiku and the Nine Plates.

Today I wanted to tell a story, this one in particular being a ghost story – The story of Okiku and the Nine Plates. Now this is one of Japanese better known Ghosts stories and does go by several names. One of originals being known as Bancho Sara-yashiki (The Plate Mansion of Bancho) dated to 1741 and this first appearance was seen through the medium of Japanese bunraku plays (or puppet plays).

So with that out of the way, lets head into the story.

Mukashi mukashi, long long ago in the old Province of Harima, there was a most beautiful woman who went by the name of Okiku. Everyday Okiku worked as hard as she could for the Samurai she served as his maidservant. Okiku worked for the man known as Aoyama Tessan, he himself a servant, servant to the lord who ruled the area of Harima Province.

Tessan has spent day after day serving his master, wishing he could overthrow the man he served and himself become the leader and ruler of Harima. Thoughts gathered in his mind over the time her served his master, thoughts of how he could fulfil his dark desires; until one day he came upon a solution. Poison. Poison should do the trick just find, and as Tessan had also been so loyal, why would anyone expect it was him?

‘I have a plan for you,’ he said to Okiku one day.

‘Anything.’ She replied, for how could she refuse to served her master in all things?

When the day grew close however, he was forced to abandon his plans, somehow, someone had learned of the plot to kill the leader of Harima and so Tessan retreated from his lofty goals; all the while acting like the attentive retainer he had always been. As he had suspected, no-one suspected he could have been the one to have formed such an evil plan. Though Tessan was free from suspicion, a man was tasked to try and uncover the one behind the plot. And so this man, Danshiro set about his work.

He was a bright man, quickly deducing that Okiku was the one to blame. But here he found himself with a problem. He knew Okiku had to be punished, but he too had always held a strong love for this woman, and always wanted her to be his bride and future wife.

‘Okiku, I know it was you who tried to poison the Lord,” he said when he approached her, ‘but there is a way I can save you.’

‘And what would that be?’ Okiku asked.

‘Why, if you marry me, then I won’t tell anyone of your crime. You will be safe Okiku, you merely need to consent and marry me.’

It took mere moments for Okiku to respond, ‘dame! Never!’

Danshiro, angry and humiliated left immediately, but quickly began to form his revenge on the woman who denied his advances.

‘What better way to shame Okiku, than the have a servant girl, loose something precious in the household she serves.’ He laughed, his plan now formed.

He personally went ahead and hid one plate from a collection of ten priceless heirloom plates that the family owned, and quickly blamed Okiku for losing it. There was no way to prove her innocence, try and she might to find this missing plate she could not. And so Danshiro now finding himself able to punish her and deal with her as he wished, killed her and then disposed of her body by throwing her down the well.

Danshiro thought everything would be ok after that, but with tales such as this it is never so simple.

No not speaking they soon realised, counting, Okiku had returned. Her spirit angry, resentful and not at rest was counting.

It never ended, upon reaching nine Okiku would start again, there was no tenth plate for her to count. No tenth plate that, upon counting would give her soul ease and the rest it needed.

Tessan wishing to deal with this eventually called in a priest from a local temple to try and appeased Okiku’s spirit, after many failed attempts by reading sutras next to the well, the priest shouted the number 10 when he heard Okiku say the number nine.

‘Finally,’ Okiku sighed from the well. And now, knowing the tenth plate had been found her spirit was appeased and could finally rest.

Eventually, news reached the lord of Harima, who put Tessan to death, causing him to commit suicide by disembowelment as well as dissolving his families holdings as he own way of ending this whole sordid affair.

And there you have it, the story of Okiku. Well, at least one version of the tale, as with folktales such as this, there is always more than one version.

Some, which are almost identical to this one, do say Okiku’s spirit was eventually appeased or exorcised in a way when a priest shouted ten after Okiku reached the number nine. Thus finally, she had all the plates once more and her spirit could rest.

Now if you are wondering, Ghost in Japanese, at least in terms of old tales such as this one are known as Yurei. However, Yurei also fall into various categories, Okiku falling into the type known as an Onryo. This term basically being used to describe a ghost who has a lot of lingering anger and hate. Further back in time, it was also used to describe Ghosts who had a hatred for the Emperor and had returned to wreck havoc on the nation. One final thing of note, there is a temple, called Chokyu-ji, located in Shiga Prefecture who say they own a set of plates which once belonged to Okiku. Their story goes that, Okiku’s mother so the priests there could perform a kuyo (a kind of funeral rite) to release her daughter’s connection to them. Nowadays only six of the origin set remains. (So I hope that doesn’t cause Okiku to return in anger at more plates being broken!).

So there you have it.

My only problem with this tale is that, if Okiku said no to Danshiro, why not just then say she did the poisoning and have her dealt with that way instead? Either way, I think it would have ended with Okiku being killed.

Today’s poem is by a man known as Nakao Kaishi, who lived between 1669 and 1731. His poem todays comes from the Haikai Sabishiori and is a lament for the passing of Matsuo Basho.

Anything at all
and I find myself in tears
hut, in Winter.