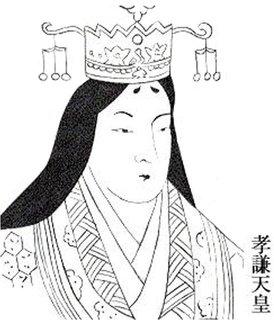 Empress Kōken  (孝謙天皇) was the 46th Emperor of Japan, reigning from 749-758AD, returning to the throne again as the 48th Emperor, renaming herself Empress Shōtoku (称徳天皇) and reigning from 764-770AD. She was the daughter of Emperor Shōmu and Fujiwara no Asukabehime.1

Fujiwara no Momokawa served under both her reigns with the title of Minister.2

The Emperor Shōmu abdicated in her favor and so in AD740 she performs a ceremonial ritual dance to show she would acceded after her father. Her father named a Crown Prince for her on his death bed, however the promise to uphold this position for the Crown Prince was violated in a year due to the interference of Fujiwara no Nakamarō.

She is noted to have had a vigorous and powerful rule, eventually abdicating after Fujiwara no Nakamarō convinces her to do so, leading to Emperor Junnin to take the throne.

Before her abdication she is said to have been gravelly ill, however, she meets the Buddhist Priest Dōkyō, a medical authority at the time who treats and heals her. She then promotes Dōkyō.

After her illness clears she becomes very involved, and actually more active, in politics than Emperor Junnin.

By 762AD is appears she had grown tired of the Emperor Junnin and the power behind him (Nakamarō). She enters court, forming an edict which attacks the legitimacy of Junnin’s claim to the throne stating he is not in direct line for succession from Prince Kusakabe.

Therefore, as ‘Great-Abdicated-Emperor’ she states she will claim back the throne. Nakamarō feeling threatened by this, steals the Privy Seal and looked to be about to replace Junnin with another candidate.

However, the Empress learns of the plot and has Nakamarō hunted down, and exiled. She then deposes Junnin to return to the throne as Empress Shōtoku.

Returning to the throne she promotes and gives even more prestige to Dōkyō, even looking to prepare him to take the throne.1